Pattern of Water Use at the United Arab Emirates University

In this study, indoor water use at the United Arab Emirates University (UAEU) was assessed for three years (2016, 2017, and 2018). A geographic information system (GIS) was employed to determine where water use is high within the university, when and why water is used, who uses it, and how to minimize its usage. Diverse data were employed to elucidate the broad patterns of university water use. It was assumed that water use is directly proportional to the number of students and is lower during winter. The relationship between water use and number of students in academic buildings was modeled using least squares regression. The results indicate a low correlation between water use and the number of students, possibly due to the centralized usage of academic buildings and movement of students between them. The hypothesis of activity-driven consumption indicated that most water use occurred in residential buildings (47.5%), averaging 81.7 L per person per day (LPD). This value is lower than the metrics for dormitories in the United States (121 LPD) and Europe (143 LPD). A survey of 412 students revealed that half the respondents were not aware of water issues. Most of them (87%) preferred to drink bottled water and were not willing to use gray water for flushing (56%) or urinals (60%). The findings of this study will improve the understanding of university water use which will facilitate the development of effective water conservation policies and the establishment of such practices among the next generation. View Full-Text
Keywords: water use; UAE University; GIS; public awareness; survey water use; UAE University; GIS; public awareness; survey
►▼ Show Figures 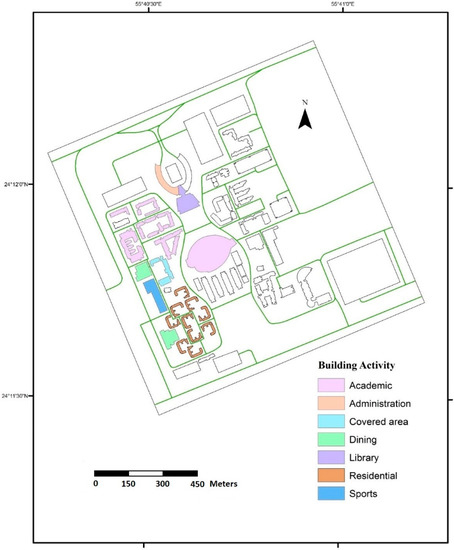