In recent years, decline of freshwater resources has been recognized as one of the main environmental problems on global level. In addition to the increasing extent of primary salinization due to climate change, secondary salinization caused by human interventions is also a significantly increasing problem, therefore, the development of various chemical-free, biological desalination and removal procedures will become increasingly important. In the present study, the salinity tolerance, salinity, and nutrient reducing ability of nine common freshwater microalgae species from the genera Chlorella, Chlorococcum, Desmodesmus, Scenedesmus, and Monoraphidium were investigated. Our results proved that the studied green microalgae species are halotolerant ones, which are able to proliferate in environments with high salt concentrations. Furthermore, most of the species were able to reduce conductivity and remove significant amounts of chloride (up to 39%) and nutrients (more than 90% nitrate). The results proved that nitrate removal of the studied species was not influenced by salt concentration, only indirectly via growth inhibition. However, the results also highlighted that N:P ratio of the medium has primarily importance in satisfactory phosphorous removal. It can be concluded that assemblages of the studied microalgae species could be able to adapt to changing conditions even of salt-rich wastewaters and improve water quality during bioremediation processes. View Full-Text
Keywords: green microalgae; salt tolerance; conductivity reduction; nutrient removal green microalgae; salt tolerance; conductivity reduction; nutrient removal
►▼ Show Figures 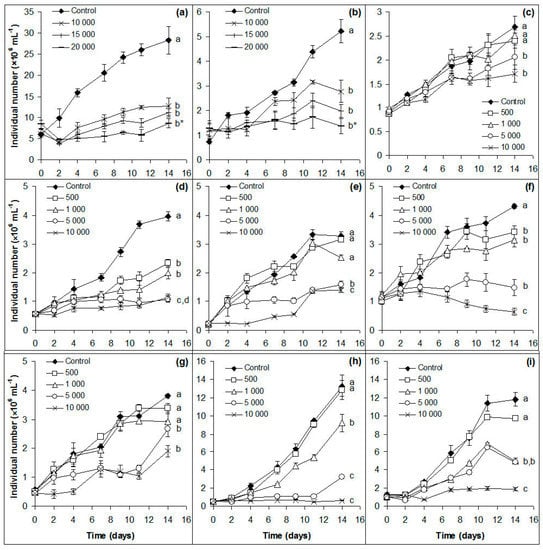