Urbanization is widely assumed to degrade soil ecosystem services, but the changes in the urban soil phosphorus (P) status due to urbanization and the associated environmental implications have rarely been studied. The objective of this study was to investigate the P forms and associated soil properties in urban soils. Thirty sites were selected along an urban–rural gradient in Nanchang, China, to examine the effects of urbanization on soil P fractions. Residual P and NaOH-extractable P (NaOH-Pi and NaOHPo) were the major P forms in the 0–30 cm of urban soils, comprising on average 37% and 43% of the total P pool, respectively, similar to the suburban and rural soils. Compared with non-urban soils, urban soil had higher contents of total P and P fractions (i.e., PH2O, PKCl, NaOH-Pi, PHCl, and residual P), as well as higher contents of related soil P-retentive properties, especially soil pH and Mehlich 3-extractable Ca and Mg. Phosphorus enrichment in the urban soils may become a source of aquatic pollution because the soil labile P content (the sum of PH2O and PKCl) was positively related to total P, PHCl, NaOH-Pi, and residual P, which implied that the labile P can be replenished by these P pools. This study increased the understanding of P stabilization characteristics (e.g., the specific P forms) of urban soils and has further implications for urban environmental management. View Full-Text
Keywords: technosol; phosphorus; urbanization; eutrophication; land use technosol; phosphorus; urbanization; eutrophication; land use
►▼ Show Figures 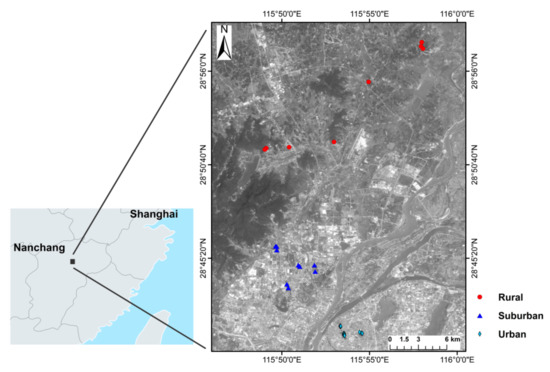