An Intermittent Karst River: The Case of the Čikola River (Dinaric Karst, Croatia)
Next Article in Special Issue

Evaluating the Effect of Farmers’ Participation in Irrigation Management on Farm Productivity and Profitability in the Mubuku Irrigation Scheme, Uganda

Landslides of Taiwan occur frequently in high mountain areas. Soil disturbance causes by the earthquake and heavy rainfall of the typhoon seasons often produced the earth and rock to landslide in the upper reaches of the catchment area. Therefore, the landslide near the hillside has an influence on the catchment area. The hyperspectral images are effectively used to monitor the landslide area with the spectral analysis. However, it is rarely studied how to interpret it in the image of the landslide. If there are no elevation data on the slope disaster, it is quite difficult to identify the landslide zone and the bareland area. More specifically, this study used a series of spectrum analysis to identify the difference between them. Therefore, this study conducted a spectrum analysis for the classification of the landslide, bareland, and vegetation area in the mountain area of NanXi District, Tainan City. On the other hand, this study used the following parallel study on Support Vector Machine (SVM) for error matrix and thematic map for comparison. The study simultaneously compared the differences between them. The spectral similarity analysis reaches 85% for testing data, and the SVM approach has 98.3%. View Full-Text
Keywords: landslide; image classification; spectrum similarity analysis landslide; image classification; spectrum similarity analysis
►▼ Show Figures 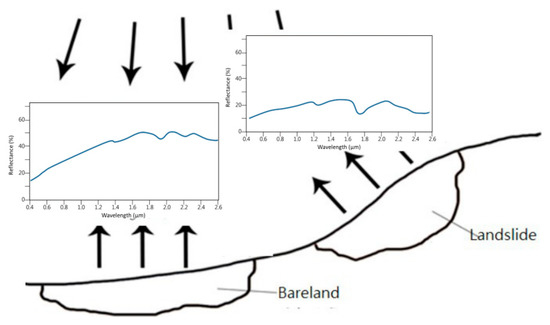