Water Users Associations in Tanzania: Local Governance for Whom?

We sampled the zooplankton communities in Beaverdam Reservoir (BVR; 37.313° N, 79.816° W), Carvins Cove Reservoir (CCR; 37.371° N, 79.958° W), and Gatewood Reservoir (GWR; 37.043° N, 80.862° W) in 2014–2016, and Spring Hollow Reservoir (SHR; 37.231° N, 80.176° W) in 2014 and 2015. These reservoirs share a similar climate, and are in the same region in southwestern Virginia, USA (Table 1). All four reservoirs also share a similar assemblage of planktivore and piscivore fish taxa: All of these reservoirs have bluegill, sunfish and smallmouth and largemouth bass (Virginia Department of Game and Inland Fisheries, unpublished data; Western Virginia Water Authority, unpublished data). CCR and SHR are drinking water supply reservoirs for the city of Roanoke, Virginia, and have bubble plume oxygenation systems, which maintain oxic conditions in their hypolimnia throughout the year [36,37]. BVR, a secondary drinking water supply reservoir for the city of Roanoke, and GWR, a drinking water supply reservoir for the town of Pulaski, Virginia, USA, do not have oxygenation systems [37,38]. The hypolimnia of BVR and GWR become hypoxic after the onset of thermal stratification in the spring.

CCR, BVR and GWR were sampled approximately fortnightly during the thermally-stratified period (May–September) during daytime hours (9:00–17:00) from 2014–2016. SHR was sampled the same way, but only in 2014 and 2015 due to logistical constraints. The reservoirs were all sampled at their respective deepest locations near the dam (GPS coordinates above).
On each sampling date, we sampled physical, chemical and biological variables. We collected high-resolution (4 Hz sampling rate) temperature and dissolved oxygen (DO) depth profiles from the surface of the water column to the sediments using a Conductivity, Temperature, Depth Profiler (CTD; SeaBird Electronics, Bellevue, Washington, USA) coupled with an SBE 43 DO membrane sensor. On dates when the CTD was not available, we collected depth profiles of temperature and DO using a YSI multi-parameter sonde (YSI, Inc., Yellow Springs, Ohio, USA) at 0.5 to 1 m increments from the surface to the sediments of the water column.
In 2015 and 2016, we collected high-frequency measurements of total phytoplankton biomass using a FluoroProbe (bbe Moldaenke, Schwentinental, Germany), that measures phytoplankton biomass at ~20–40 cm depth increments from the surface to the sediments [39,40,41]. In 2014, the FluoroProbe was not available on all sampling dates, so total phytoplankton biomass was estimated as chlorophyll a concentration from filtered manual water samples. We collected water in opaque bottles for chlorophyll a on all sample dates at both the subsurface (0.1 m depth) and the thermocline, as determined by the CTD or the YSI, using a 4-L Van Dorn sampler (Wildco Supply Company, Yulee, FL, USA). Approximately 500 mL of water was filtered through 1.2-μm Whatman GF/C filters and frozen until laboratory analysis. To verify that there were no differences between the two sampling methods for phytoplankton estimates, we compared the mean epilimnetic chlorophyll a concentration with mean epilimnetic FluoroProbe total phytoplankton biomass on fourteen dates when both were used simultaneously in 2014, and found no significant difference in phytoplankton estimates (Paired t-test: P = 0.14). Therefore, we determined chlorophyll a to be a proxy for phytoplankton biomass in our study, and thus reported phytoplankton estimates as phytoplankton biomass.
We also collected unfiltered subsurface (0.1 m depth) water samples for total nitrogen (TN) and total phosphorus (TP), and measured water clarity with a Secchi disk to provide additional metrics of reservoir trophic status. The bottles used to collect water samples for TN and TP were acid-washed prior to use, and water samples were frozen until analysis in the laboratory.
Zooplankton were collected with 74-μm mesh size vertical tow nets (Wildlife Supply Company, Yulee, FL, USA) on each day of data collection. Vertical tow nets were lowered to approximately 0.5 m above the sediments to the water surface at a constant speed in CCR, BVR and GWR. Because SHR is much deeper (Table 1) than the other three reservoirs, we only collected vertical tows from 30 m depth to the surface to avoid net efficiency issues [42,43]. Collected zooplankton samples were immediately preserved in 70% ethanol for later enumeration in the lab.

TN and TP concentrations were measured following the United States Geological Survey (USGS) method I-4650-03 after a persulfate digestion using a Lachat flow-injection analyzer (Lachat ASX 520 Series, Lachat Instruments, Loveland, CO, USA). In 2014, chlorophyll a was extracted from filters for 24 h in 10 mL of 96% ethanol buffered with MgCO3, and then centrifuged for 10 min. Absorbances at 664, 665 and 750 nm were recorded for the samples on a Shimadzu UV-1601 spectrophotometer (Shimadzu, Kyoto, Japan) and then the samples were acidified with 0.1 mL of 0.1 N HCl to ultimately measure chlorophyll a concentration from living cells [44].
All crustacean zooplankton (sum of the copepods and cladocera) were identified to the genus level for cladocera and calanoid copepods, and to the order for cyclopoid copepods, using a Meiji RZ dissecting microscope (Meiji Techno, San Jose, CA, USA) at 50× magnification. At least 100 individual zooplankton were counted in each sample to ensure the identification of rare taxa. The counts of zooplankton in each sample were converted to zooplankton density (individuals L−1) in the water column by scaling the count data to the total volume of water sampled in the water column by the vertical net tows [42]. The lengths of the first ten observed individuals of each zooplankton taxon in each sample were measured to calculate biomass via length-weight regressions [42]. Larger predatory zooplankton such as Leptodora and Chaoborus were counted in each sample, but were not the focus in this study; therefore, these two taxa were not included in any analyses. Each reservoir had both Leptodora and Chaoborus present, but at very low densities. All samples were collected during daytime hours, and so Chaoborus estimates were not complete, because Chaoborus often burrows into the bottom sediments during the day. Leptodora was only sporadically present in the reservoirs (n = 3) at very low densities and biomass; therefore, not including Leptodora in our analyses did not affect results, nor can conclusions about Leptodora be reported because of the low sample size.

The four reservoirs exhibited similar thermal structure throughout the sampling period. Thermal stratification developed at the beginning of May in all four reservoirs in all three years (Figure 1A,C,E,G; Figure A1 and Figure A2), which exhibited similar mean seasonal thermocline depths across all three years (CCR: 6.6 ± 1.0 m (1 SD), SHR: 5.0 ± 0.8 m, BVR: 4.4 ± 0.9 m, GWR: 6.6 ± 1.7 m). The water temperatures of the four reservoirs were similar, with maximum epilimnetic temperatures of 27–30 °C and hypolimnetic temperatures between 10–15 °C during the monitoring period across years. Both oxic and hypoxic reservoirs exhibited warming water column maximum temperatures between the early and late stratified periods, with a slightly greater mean increase in the hypoxic reservoirs than the oxic reservoirs (2.62 ± 1.65 °C vs. 1.78 ± 1.32 °C, respectively; Table 2; Figure 2C,D).
Although thermal structure was relatively similar across the reservoirs and across the years, DO concentrations were different. The hypolimnia of the CCR and SHR remained oxic throughout the monitoring period in May–September every year (Figure 1B,D; Figure A1 and Figure A2). In contrast, the hypolimnia of both GWR (Figure 1F) and the BVR (Figure 1H) were oxic at the onset of thermal stratification but became hypoxic generally in late-June to mid-July in the GWR and mid-June to early-July in the BVR, except for in 2015. In 2015, the hypolimnion of the BVR became hypoxic at the onset of thermal stratification at the beginning of the sampling season in mid-May (Table A1; Figure A1). Mean hypolimnetic DO concentration was approximately 7× lower in the late stratified period in BVR and GWR vs. in those two reservoirs’ early stratified periods (early vs. late mean hypolimnetic DO concentration: 4.6 ± 0.8 mg L−1 vs. 0.7 ± 0.3 mg L−1, respectively; Figure 2A,B). Wilcoxon signed rank tests confirm significant differences between the early vs. late stratified periods in the hypoxic, but not oxic, reservoirs (Table 2).
In addition to DO, other environmental variables exhibited differences between the early vs. late stratified periods among the reservoirs. Secchi disk depths were deeper in the SHR (8.8 ± 2.5 m, 1 SD) and CCR (4.2 ± 0.8 m) compared to GWR (3.5 ± 0.6 m) and BVR (3.1 ± 0.7 m) across years (Table 3). Nutrient concentrations and phytoplankton biomass were generally lower in the SHR and CCR compared to the GWR and BVR across years (Table 3). Generally, water quality improved in the oxic reservoirs in the late vs. early stratified period (as indicated by significantly deeper Secchi disk depths and lower TP concentrations), while water quality decreased in the hypoxic reservoirs (as indicated by significantly greater phytoplankton biomass and TN concentrations; Figure 2E,F; Table 2; Table 3). 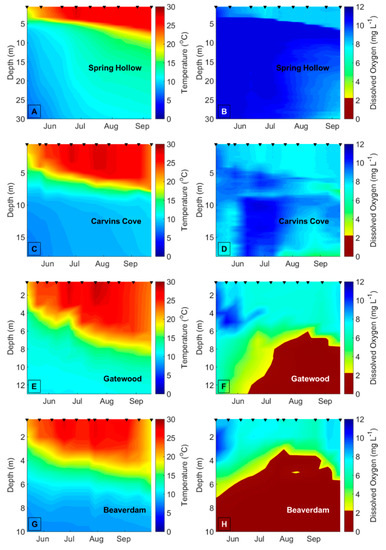 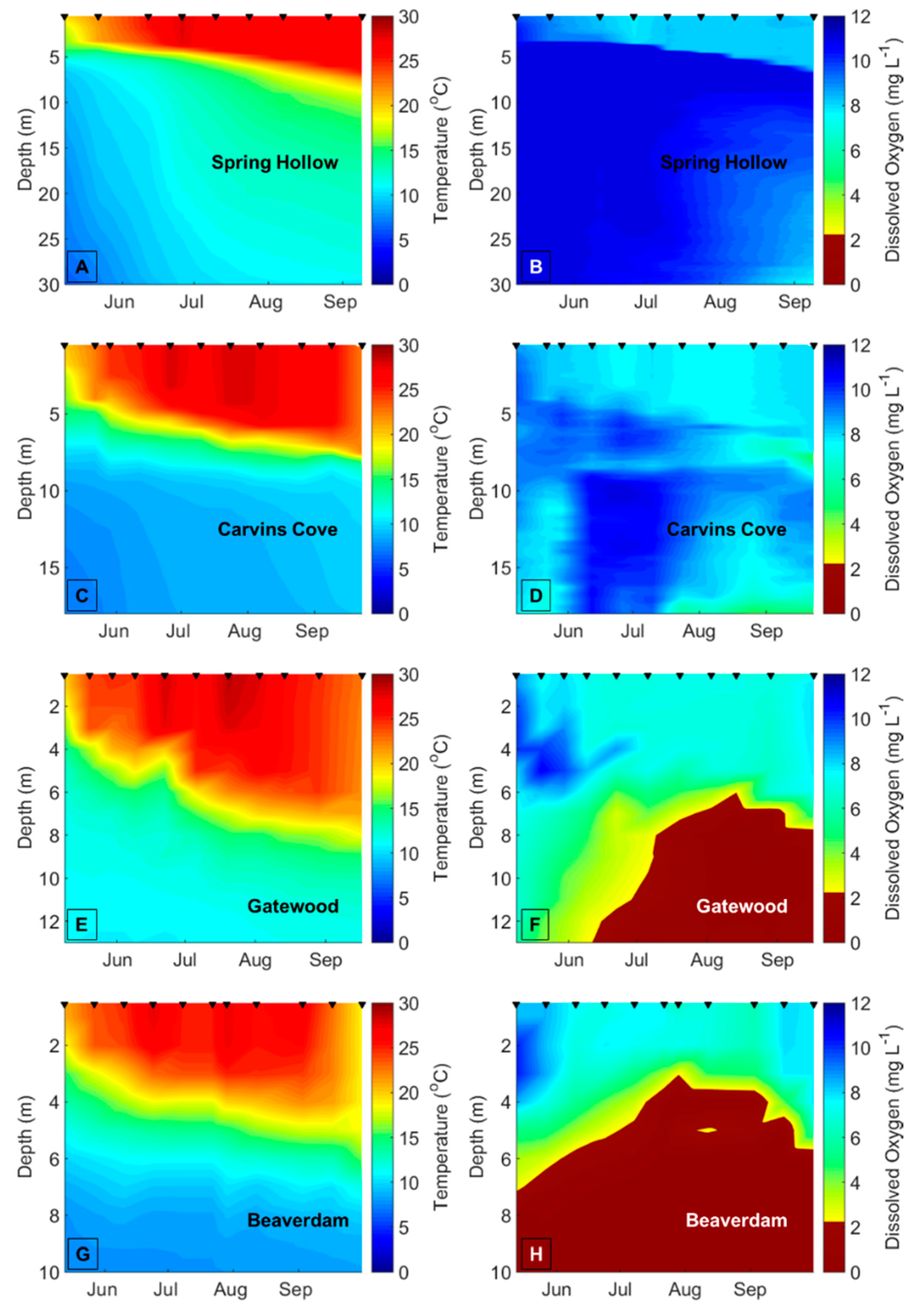 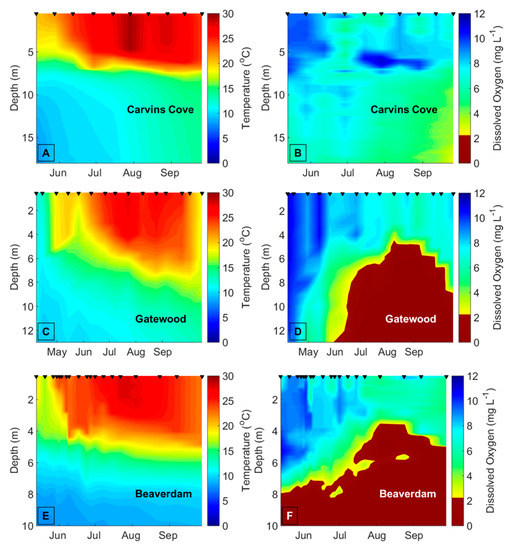 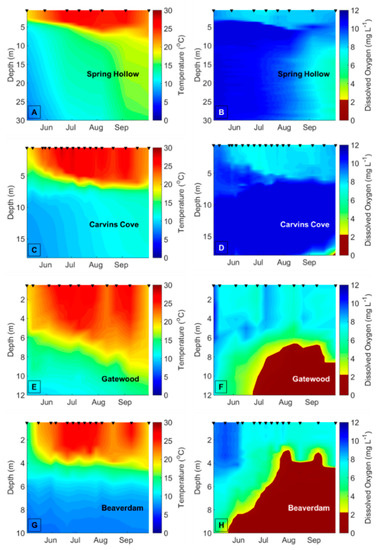 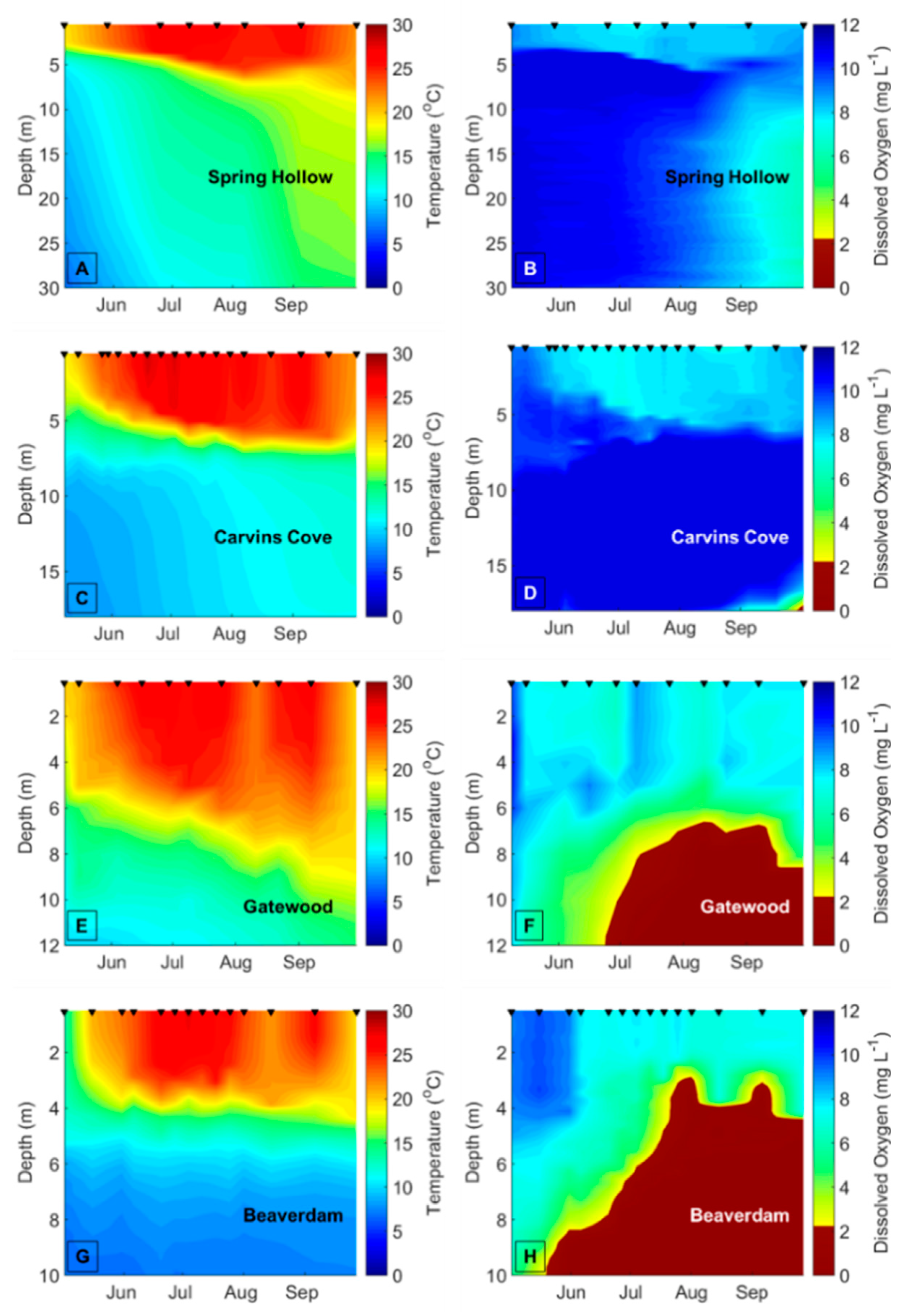 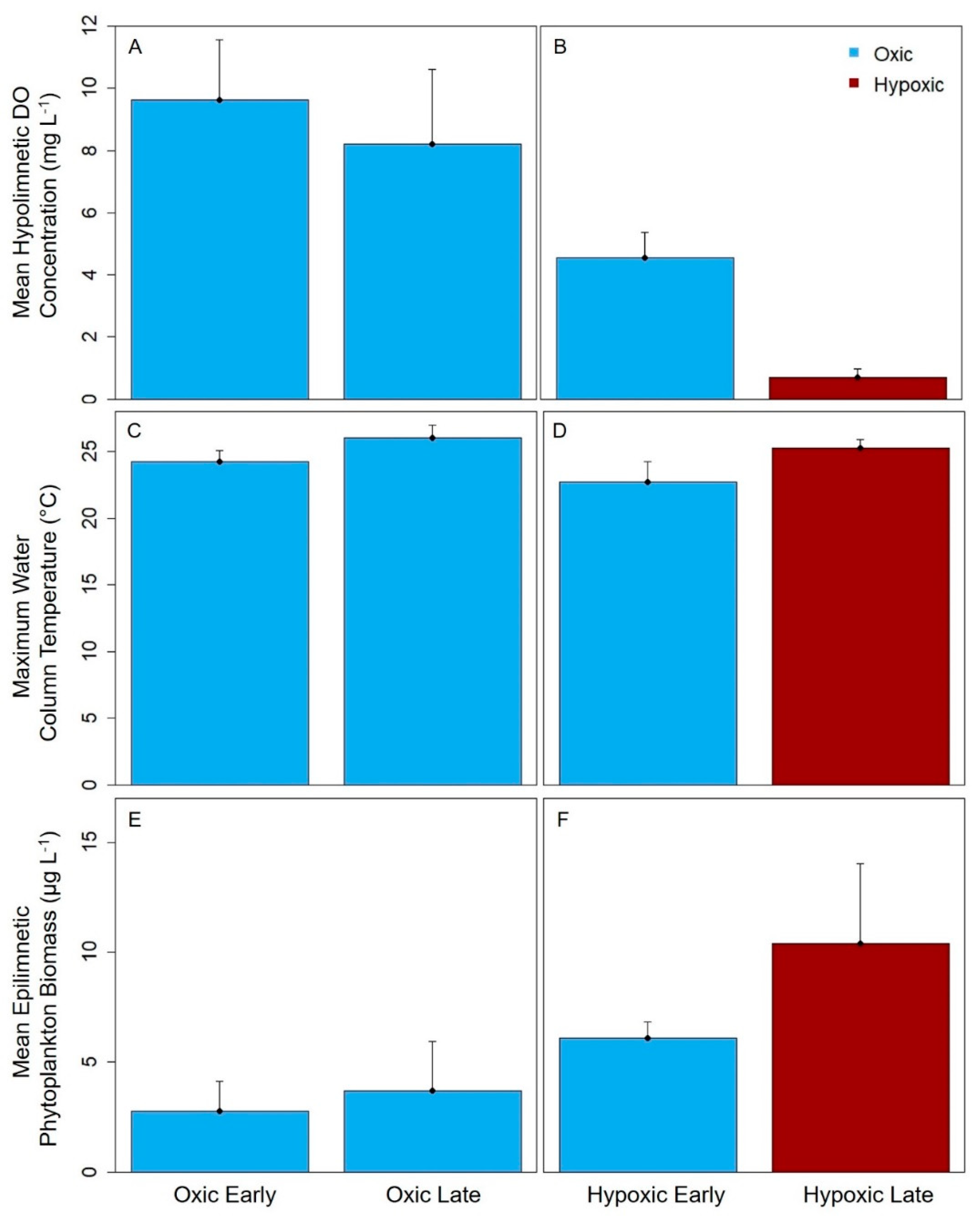 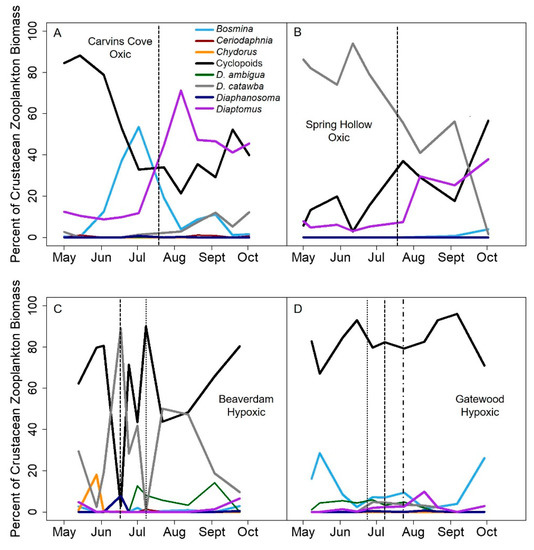