Groundwater and soil pollution caused by (PAHs) spills, mostly from the oil industry and petrol stations in urban areas, represent a major environmental concern worldwide. However, infiltration into groundwater is decreasing due to the natural attenuation processes of PAHs in the vadose zone, which protect invaluable groundwater resources against contamination. This study was conducted to evaluate the effect of improper management of the petroleum industry on the groundwater and soil surrounding the petrol station and an oil refinery unit and, furthermore, to prepare the polluted risk intensity (PRI) map. Fifty-one soil samples and twenty-five water samples were analyzed for Light Non-aqueous Phase Liquid (LNAPLs), and one soil sample for Dense Non-Aqueous Phase Liquid (DNAPLs); furthermore, six soil samples analyzed for Tetraethyl Lead (TEL) analysis. The results showed that seventeen wells were polluted with LNAPLs and the soils were highly contaminated with different DNAPLs components and mainly was in the form of Polycyclic Aromatic Hydrocarbons (PAHs). Seven factors introduced to the GIS platform to produce PRI map, which is the distance to source, depth to water table, slope, lineaments, lithology, soil, and recharge rate. The final map revealed that the eastern and western parts of the study area are at a very high-risk level, whereas the center is at a very low to low-risk level. View Full-Text
Keywords: LNAPL; DNAPL; groundwater and soil contamination; oil leakage; Sulaymaniyah; Kurdistan region; Iraq LNAPL; DNAPL; groundwater and soil contamination; oil leakage; Sulaymaniyah; Kurdistan region; Iraq
►▼ Show Figures 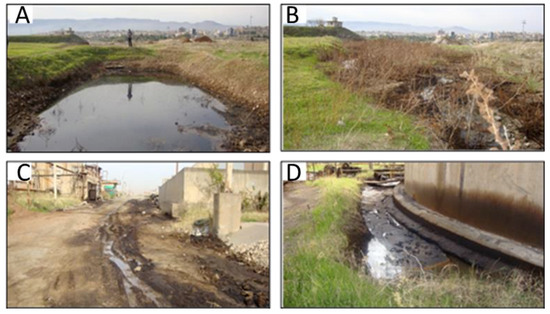