Strategies, Processes, and Results for the Future Water Supply of the Växjö Municipality: Evaluation of an Evidence-Based Case Study of Long-Term Strategies within the Water and Wastewater Sector in Sweden
Previous Article in Journal

Since the 1990s, nature and water management policies have attempted to re-create natural rivers systems by mimicking curvy meandering planforms, based on the assumption that meandering is the natural channel-forming process. However, in low-energy river systems, the extent to which meandering plays a natural role is often minimal. This study aims to quantify contemporary lateral migration in the low-energy irregular sinuous lowland river system of the Drentsche Aa, The Netherlands, and to determine the factors influencing lateral channel migration in a heterogeneous valley fill. Although the river is classified as laterally immobile based on an empirical stability diagram, field observations prove that erosion and deposition are currently occurring. By analyzing historical and present-day maps, it was shown that lateral migration was highly spatially variable for the period 1924–2005. Sinuosity and valley gradient are not correlated to lateral migration rates, suggesting they are not a measure of lateral migration in the case study area, which is in line with the literature. Based on geomorphological and soil map analyses, it was shown that lateral migration rates are significantly higher in valley fills of aeolian sands than in clastic alluvial deposits, which on their turn are significantly higher than in peaty environments. Therefore, local conditions appear to be dominant over other factors such as stream power and bed grain size. These findings are important for river rehabilitation of low-energy rivers, because it shows that local valley fill conditions can greatly influence active lateral migration in the river. View Full-Text
Keywords: bank composition; lateral migration; lowland river; meandering; river rehabilitation bank composition; lateral migration; lowland river; meandering; river rehabilitation
►▼ Show Figures 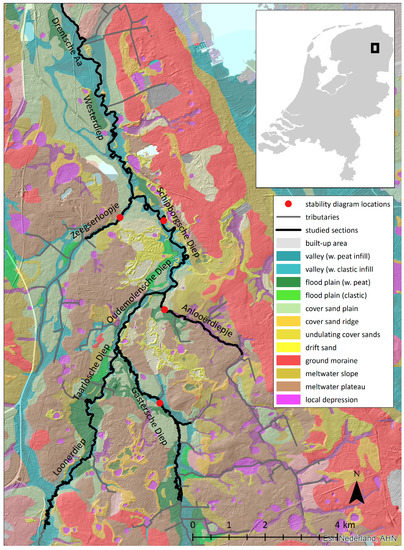