Applying a Series and Parallel Model and a Bayesian Networks Model to Produce Disaster Chain Susceptibility Maps in the Changbai Mountain area, China

The aim of this project was to produce an earthquake–landslide debris flow disaster chain susceptibility map for the Changbai Mountain region, China, by applying data-driven model series and parallel model and Bayesian Networks model. The accuracy of these two models was then compared. Parameters related to the occurrence of landslide and debris flow disasters, including earthquake intensity, rainfall, elevation, slope, slope aspect, lithology, distance to rivers, distance to faults, land use, and the normalized difference vegetation index (NDVI), were chosen and applied in these two models. Disaster chain susceptibility zones created using the two models were then contrasted and verified using the occurrence of past disasters obtained from remote sensing interpretations and field investigations. Both disaster chain susceptibility maps showed that the high susceptibility zones are situated within a 10 km radius around the Tianchi volcano, whereas the northern and southwestern sections of the study area comprise primarily very low or low susceptibility zones. The two models produced similar and compatible results as indicated by the outcomes of basic linear correlation and cross-correlation analyses. The verification results of the ROC curves were found to be 0.7727 and 0.8062 for the series and parallel model and BN model, respectively. These results indicate that the two models can be used as a preliminary base for further research activities aimed at providing hazard management tools, forecasting services, and early warning systems.
Keywords: landslide; debris flow; series and parallel model; Bayesian Networks model; susceptibility; Changbai Mountain landslide; debris flow; series and parallel model; Bayesian Networks model; susceptibility; Changbai Mountain

The main aim of this research is to apply the data-driven model (series and parallel model and the BN model) to evaluate the earthquake-landslide-debris flow disaster chain susceptibility in the Changbai Mountain area, China. Detailed disaster inventories were obtained from the visual interpretation of remote sensing data prepared by the Jilin Institute of Geological Environment Monitoring (JIGEM). All disaster points (defined as the locations of past disaster events) were randomly selected and divided into two groups for training and verification. A portion of the disaster points with correlatively calculated or extracted parameters was used for the series and parallel and BN models to obtain the disaster chain susceptibility map. The remaining disaster points were applied for comparison and verification purposes. According to Fabbri [39], the classification of disaster positions for a precise verification process is significant. Based on this objective, three classification methods—time of disaster occurrence, space of disaster occurrence, and random classification—were proposed [40]. Among these, space and random classification were applied together for 360 disaster points (that is, the location of the occurrence of a past disaster) that occurred in Jilin province as the exact occurrence time of these disaster incidents is not known precisely. The 360 disaster points were selected for initiation locations, 200 disaster points were landslide, 160 disaster points were debris flow, and landslide and debris flow were triggered by the earthquake and rainfall. These disaster points were divided into two portions: those that occurred in the Changbai Mountain region and those that occurred in other regions. Ninety disaster points occurred in the Changbai Mountain region. The 210 disaster points observed in other areas of Jilin province were used for calibration, and the remaining 60 points were used to validate the series and parallel and BN models. Basic linear correlation and cross-correlation methods were then applied to compare the models. Finally, relative operating characteristics (ROC) curves were used to validate the accuracy of the susceptibility results obtained from the models. Figure 1 illustrates the described methodology.

The Changbai Mountain region comprises a total area of approximately 3278 km2 and is situated in Jilin Province, China (Figure 2). In the study area, the terrain is generally high in the center, low in northeast, northwest, and southwest, with a stepped topography descending to the south and southwest. Mountains and hills also exist in the area with v-shaped gullies producing significant relief. The rock types in the area consist mainly of basalt, granite, alkali trachyte, and trachyte breccia, with the basaltic rocks accounting for three-quarters of the surface area. The study area belongs to the North Temperate Zone with a continental monsoon climate. The climate is characterized by four seasons with long, cold winters and short, wetter summers. The average temperature is 2.1−3.3°C, the extreme minimum temperature is 36.4°C, and the extreme maximum temperature is 40.5°C. The average rainfall is 632−1407.6 mm, with about 60% of annual rainfall. Large and concentrated rainfall events have created favorable conditions for triggering landslides.
Tianchi volcano is a well-known volcano located in the area, capable of potentially catastrophic eruptions. According to monitoring data, the volcanic activity has shown a clearly increasing trend since 2000, and therefore the possibility of an eruption has also increased. More than 200 earthquakes with magnitudes greater than 1 have occurred each year. The topography and geomorphology of the study area are very complex and there are numerous large mountains and rivers distributed throughout the region. As a result, geological disasters have occurred with a high frequency. According to the monitoring data available in the Changbai Mountain region, landslides and debris flow typically occur during and after earthquakes or heavy rainfall. The minimum affected area by such landslides in the dataset is around 120 m2 and the maximum is 324,000 m2. If the volcano erupts in the future, associated earthquakes and other geological processes may result in a disaster chain. Based on the locations, types and other features such as degree of damage and occurrence frequency of past events, the earthquake-landslide-debris flow disaster chain was selected as the focus of this study.

The development conditions for disasters can be classified into two groups: the internal development conditions and external trigger conditions. The former include the geological and geomorphological conditions that constitute the internal causes and are essential to the occurrence of every disaster event. The latter include the external factors that act on a slope, acting on the internal conditions to push them to play a role in the event, intensifying the contradiction between sliding and anti-sliding, and thus accelerating the slope to slide. One or several external trigger factors can stimulate the internal development conditions to play a part in the occurrence of disaster events.
Following the above analysis, the development mechanism for disaster events can be analogized to the series-parallel circuit principle. In this study, three elements of the circuit were applied to define the occurrence mechanism of disaster events. The regional background condition of disaster development is defined as the voltage U. The trigger parameters and internal parameters are defined as the total resistance R in the circuit and represent the capacity to prevent the disaster from occurring. The current is defined as the degree of disaster susceptibility under the regional background conditions and the various parameter conditions that work together to prevent disaster occurrence. In terms of the disaster development mechanism, parameters corresponding to earthquake intensity (the extent of earthquake impact and damage) and mean annual rainfall are classified as trigger factors, whereas the elevation, slope, slope aspect, lithology, distance to rivers and distance to faults are categorized as internal development factors for landslide occurrence [41,42,43]. For debris flow occurrence, the parameters corresponding to landslide occurrence, earthquake intensity, and mean annual rainfall are classified as trigger factors whereas elevation, slope, slope aspect, lithology, distance to rivers, distance to faults, land use, and the normalized difference vegetation index (NDVI) are classified as internal development factors [44,45].

2.2.3. Evaluation of the Series and Parallel Model of Disaster Chain Susceptibility

3.1. Disaster Chain Susceptibility Assessment from the Series and Parallel Model

Many catastrophic natural hazards such as volcanic eruptions and earthquakes can induce secondary disasters, multiplying the casualties and economic losses, therefore, disaster chain susceptibility assessment has become a critical and urgent research issue. The aim of this study was to apply data-driven methods (series and parallel model and Bayesian Networks model) to evaluate the earthquake-landslide-debris flow disaster chain susceptibility in the Changbai Mountain area, China, and to compare the accuracy of these two models. The main conclusions of this study are as follows:

(1)
Visual analysis of the four disaster chain susceptibility maps showed that the susceptibility zones obtained from the series and parallel model and the Bayesian Networks model are broadly similar. Very high and high susceptibility are predominantly located within a 10 km radius of the Tianchi volcano, whereas the northern and southwestern sections of the study area were identified as low and very low susceptibility zones.
(2)
The basic linear correlation and cross-correlation methods were applied to compare the series and parallel model and the Bayesian Networks model, and the correlation coefficients, Cramer’s V and kappa index showed that the two models were similar and approximately compatible.
(3)
The verification results of the ROC curve for the two models were found to be 0.7727 and 0.8062 respectively, showing that two models have great potential for forecasting and early warning, and could be applied in emergency management for earthquake disaster chains in the future.

The authors are grateful to the anonymous reviewers for their insightful and helpful comments to improve the manuscript. 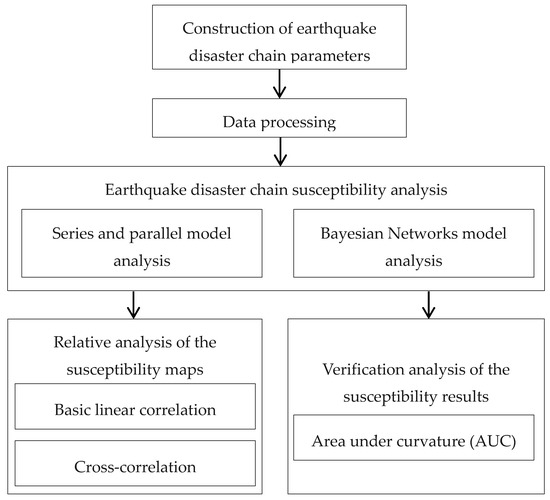 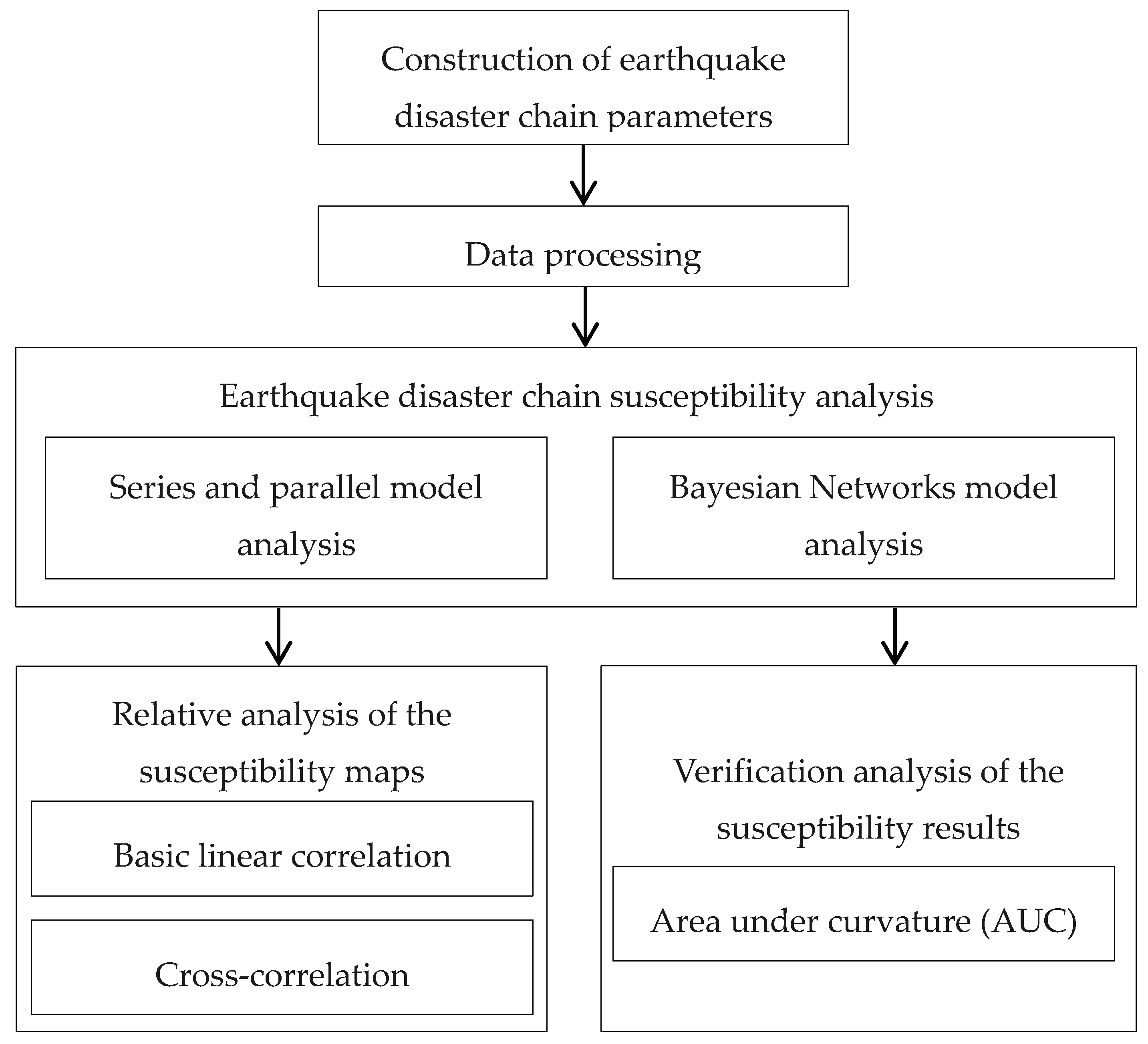 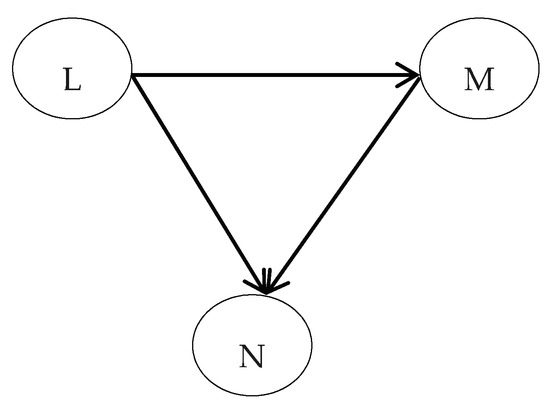 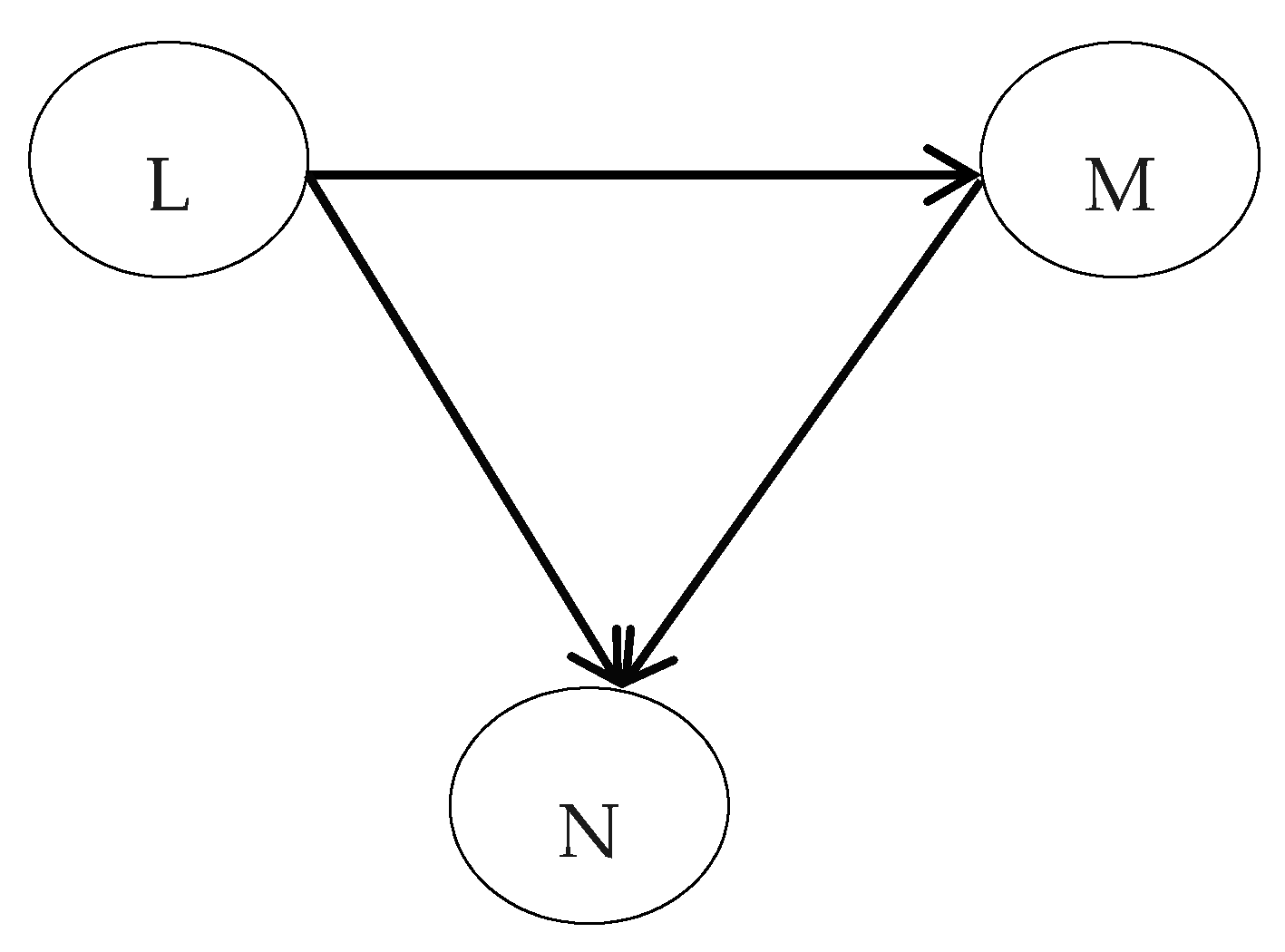 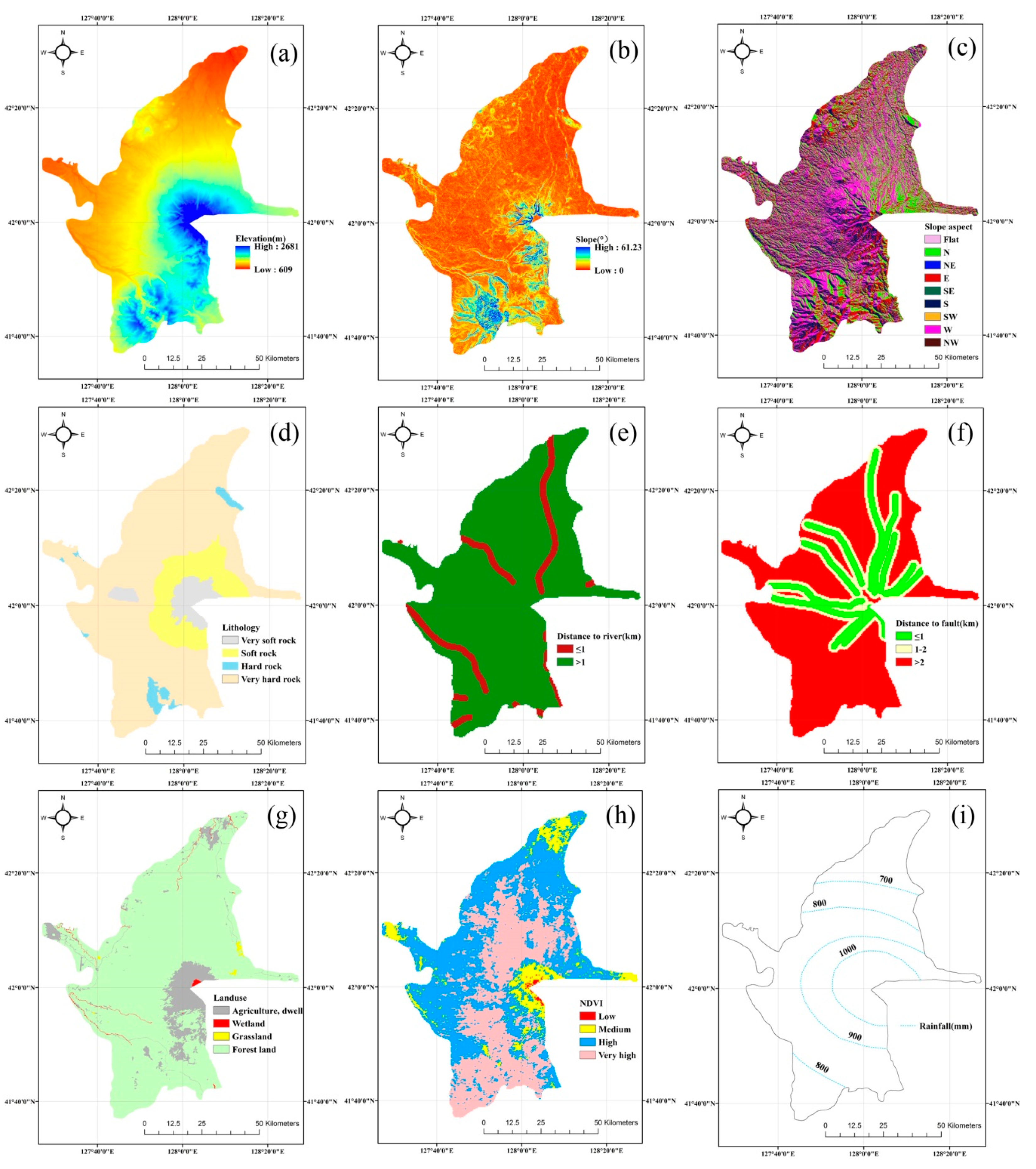 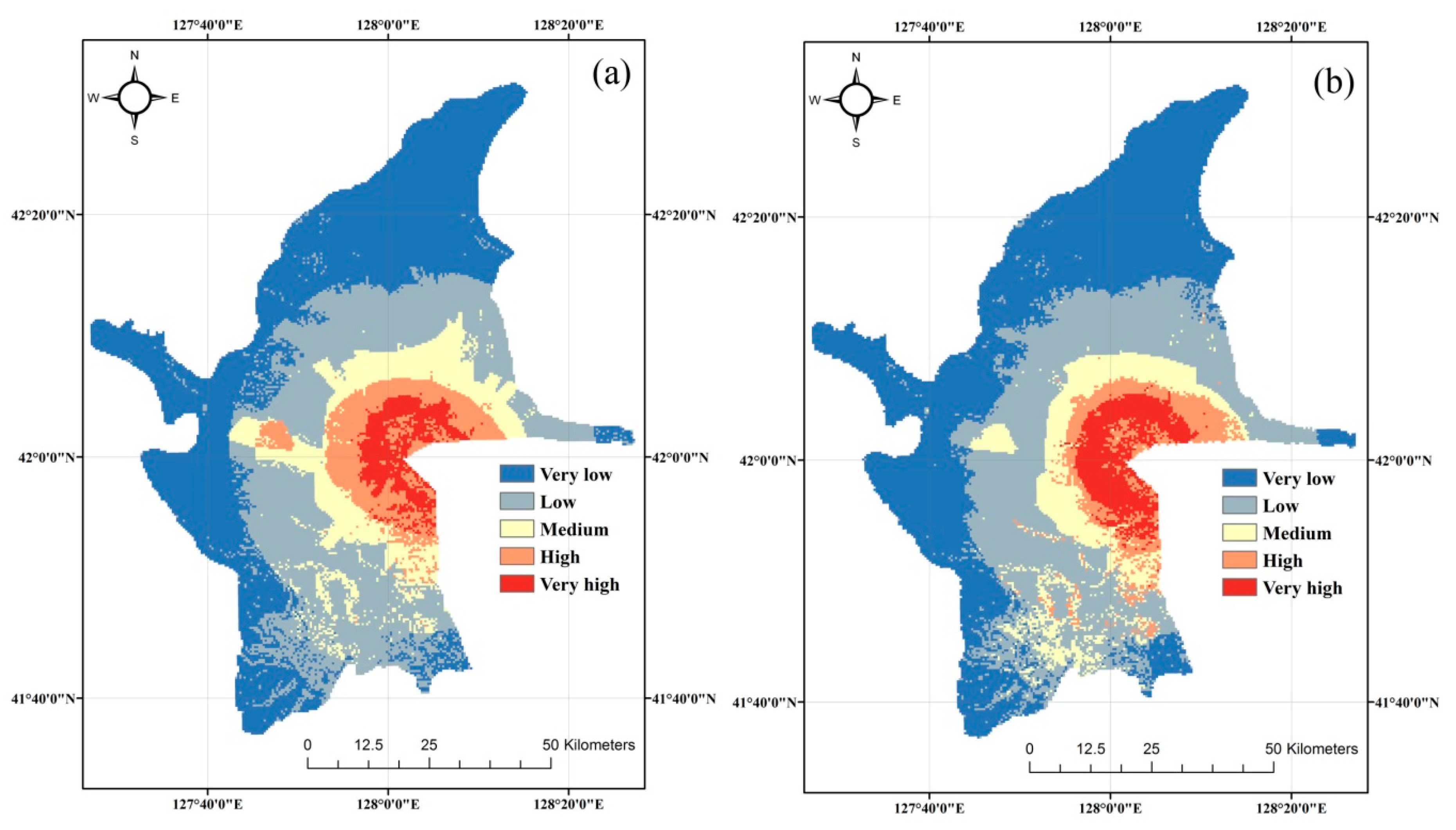