Crop production in Ethiopia is constrained with several challenges that cause low productivity and economic growth in the region. Soil degradation in the form of soil erosion and decline of soil fertility is the major constraint for crop production [1]. The alarming rise in population caused the exploitation of the rainforest and grasslands in the region to increase cultivated lands, which resulted in soil degradation and deterioration of the environment [2,3,4]. Crop production in the nation is mainly a rainfed system using traditional farming practices [2]. The expansion of cultivated land at the expense of forest, bushes, and grassland is not a feasible option to sustain crop production let alone increased productivity. Instead, with the current poor soil and water management practices, it contributes to lower production efficiency [3].
On the other hand, rainfall variability is a great concern for a rainfed agricultural system in Ethiopia [5]. Customized local strategies are needed to maximize food supply and enhance the ecosystem at the same time. One such strategy is to enable dry season production to address the adverse effects of rainfall variability. The conservation agriculture production system (CAPS), which promotes no-till, mulching, and diverse cropping, has been shown to provide higher water use efficiency in addition to improving soil fertility [6,7,8,9]. Similarly, adoption efficient water application technologies can increase water use efficiency [10]. In relation to irrigation technology, drip irrigation is considered the most efficient water application technology [11,12]. CAPS combined with drip irrigation constitutes efficient soil and water management technology, which helps to maximize the potential of water resources and consequently increase productivity in the region [8]. Another concern is the lack of knowledge of potential to expand irrigated agriculture and maximize production. Worqlul et al., [3] indicated that less than 5% of the potentially irrigable lands are currently under irrigation.
While the positive impacts of CAPS with drip irrigation have been identified, expanding the impact to a large-scale adaptation on a country level and linking it with water resources availability would provide substantial and very useful information to policymakers in a decision-making process to improve the agriculture systems in the nation. Assessments of potentially irrigable land, corresponding crop productivity, and availability of water resources are essential components for the scale-up of CAPS with drip irrigation technology. There are few quantitative studies [3], that provided country-level irrigation potential assessment under the conventional tillage production system (CTPS) with traditional irrigation practice. However, no literature was found for a large-scale adaptation of CAPS with drip irrigation. This study attempts to examine the country-level adaptation of CAPS with drip irrigation technology for its impact on groundwater potential and crop productivity based on experimental results presented in Assefa et al. [8]. The specific objectives were to (1) assess potentially irrigable land using the multi-criteria evaluation (MCE) technique, (2) scale-up crop yields by integrating the MCE technique and a biophysical model field-scale prediction, and (3) asses groundwater irrigation potential for dry season production. The analyses were made for garlic, onion, tomato, and cabbage which are commonly grown vegetables in Ethiopia [13].

This study was conducted in Ethiopia, the second-largest populated country in the entire continent of Africa, next to Nigeria (Figure 1). The landmass of the country is approximately 110 million ha, and elevation ranges from 160 m to 4530 m above mean sea level [3]. Climate variability (as it pertains to variability in rainfall and temperature) was observed to be very high in Ethiopia (i.e., 15% to 50% coefficient of variation for rainfall and 1.6°C annual average rise) based on the long-term (1955–2015) evaluation of climate data. This poses major risks to rainfed crop production [14,15] which is the dominant agriculture practice in Ethiopia [16]. The southwestern portion of the country receives about 2400 mm of rainfall, whereas northeastern and southeastern lowland receives less than 500 mm per year [17]. There are three seasons in the year locally known as Kiremt (main rainfall season), Belg (small rainfall season), and Bega (dry season) [18].

The results of scaling-up crop yield under CAPS with drip irrigation technology to country-level were presented into three categories: (1) Assessment of potentially irrigable land in the country using the MCE technique, (2) simulation of potential crop production under CAPS with drip irrigation using a well-calibrated APEX model, and (3) assessment of groundwater potential for dry season crop production.

Four basic factors (topography, land use, proximity to road networks, and population density) were considered in the MCE technique to identify potentially irrigable land in the nation. Topography in the nation ranges from 0% (flat land) to greater than 100% (steepest land which is about 0.07% of the landmass) (Figure 3a). The slope was reclassified into five categories based on Worqlul et al., [27]: Highly suitable (0%–2%), moderately suitable (2%–8%), marginally suitable (8%–12%), less suitable (12%–30%), and unsuitable (above 30%). The various land use classes in the nation (Figure 3b) were reclassified into four suitability classes based on Assefa et al. [2], Worqlul et al., [3], and FAO [53]: Highly suitable (agricultural land), moderately suitable (grassland), marginally suitable class (shrubs, bare land), and unsuitable class (forest, urban lands, wetlands, and water). Population density ranges from 0 to 69,350 persons per square kilometer (Figure 3c), whereas proximity to road network ranges from 0 to 118 km (Figure 3d).
The Eigenvector was computed as the nth root of individual factors’ weight and then normalized with the cumulative Eigenvector to derive the final weights of factors (Table 2). Topography was found to be relatively the most influential factor in irrigated agriculture, which was consistent with Worqlul et al.,’s [3] result. Proximity to road networks and land use were found to be the second and third most influential factors in determining potentially irrigable land in the nation. The consistency ratio was found to be trustworthy (CR = 0.03 ≤ 0.2) based on Chen et al., [54] and Koczkodaj et al., [55]. The final weights of factors were distributed to the various suitability classes and factors were combined using a weighted sum overlay. An 85% threshold was used to obtain potentially irrigable land (Figure 4). About 18.7 Mha of land, 16.7% of the total landmass, was found to be potentially irrigable in the nation without considering soil and weather. The suitability ranges in Figure 4 cover different portions of the irrigable land: 85%–88% (76% of the irrigable land), 88%–91% (11% of the irrigable land), 91%–94% (1.5 of the irrigable land), 94%–97% (11.5% of the irrigable land), and 97%–100% (0.4% of the irrigable land).
Irrigation demand of each vegetable was computed by considering the conservation agriculture principles, drip irrigation technology, water use of different vegetables, and weather conditions. Oromia regional state has the highest irrigable land (35.4%) when compared with other states. Figure 5 illustrates the degree of irrigation suitability (i.e., marginal, satisfactory, medium, high, and very high) for potentially irrigable lands: 18.7 Mha, 4.5 Mha, 2.5 Mha, 2.2 Mha, and 0.082 Mha at 85%, 88%, 91%, 94%, and 97% suitability classes, respectively.

Figure 6a shows the various soil texture classes in the nation. The mean annual rainfall was computed spatially using inverse distance weighting interpolation from weather stations point data (Figure 6b), and the spatial rainfall was reclassified using natural breaks into eight rainfall zones (Figure 6c). Soil textures and rainfall zones were combined, which resulted in 39 unique regions for further analyses of crop yields. The APEX model was developed for each of 39 unique zones, which was defined using the soil texture classes and climate zones. Results were then aggregated as per administrative boundaries of Ethiopia (11 regional states) to provide input for decisionmakers in developing policy and implementation strategies for water resource and agriculture-related projects.
Crop coefficients at the mid-stage of crop growth (Kc-mid) were obtained from Allen et al., [48] of the Food and Agricultural Organization (FAO) for various vegetables. These data indicate that more irrigation is needed for tomato during the mid-stage of growth followed by cabbage when compared to garlic and onion. Moderate resolution image spectrum (MODIS) potential evapotranspiration data (2000–2010) was used to estimate the net irrigation demand in the region during the dry season. The growing period used for garlic, onion, and cabbage was December through February whereas December through March was the growing season for tomato.
This study used these water use data for the various vegetables under CA and CT practices from Assefa et al., [8] and developed a linear irrigation coefficient, Cf, for each vegetable to account for irrigation volume reduction under CA during the calculation for the irrigation requirement. The value of Cf obtained from CA and CT comparison was 0.58, 0.54, 0.80, and 0.81 for garlic, onion, tomato, and cabbage, respectively. These coefficients explain the advantage of conservation practices over conventional tillage systems for irrigation water savings mainly due to mulch cover and no-till practice in CAPS plots minimized water loss through evaporation and runoff. Additionally, the water-saving in garlic and onions was higher when compared with cabbage and tomato. This could be due to the less leaf area of garlic and onion, which made the impact of CAPS significant in reducing water loss when compared with tomato and cabbage.
Net irrigation demand was computed for each vegetable over the irrigable land considering drip irrigation efficiency, crop coefficient, effective rainfall during the growing period, and irrigation coefficient. These data along with other inputs such as soils, weather data, cropping details, irrigation application rate, and crop water demand were supplied to the calibrated APEX model to estimate crop yield. Crop yield results were averaged for the simulation period (2000–2010) and limited to potentially irrigable land in the nation. The average fresh vegetable yield under CAPS ranged from 1.8–2.8 t ha−1 for garlic (Figure 7a), 1.4–2.2 t ha−1 for onions (Figure 7b), 5.5–15.7 t ha−1 for tomato (Figure 7c), and 8.3–12.9 t ha−1 for cabbage (Figure 7d). Crop productivity was found to be higher in Oromia and Amhara regions due to the combined effects of the weather and soil condition. The variation of yields for tomato was found relatively high when compared to other vegetables, possibly due to weather variations and the fact that tomato is more sensitive to cold weather. The maximum and minimum allowable temperature for tomato is 27°C and 10°C, respectively, for optimal crop growth.

3.3. Groundwater Potential for Crop Production under CAPS with Drip Irrigation

This research and publication are made possible by the generous support of the American people through support by the United States Agency for International Development Feed the Future Innovation Labs for Collaborative Research on Small Scale Irrigation (Cooperative Agreement No. AID-OAA-A-13-0005, Texas A&M University) and Sustainable Intensification (Cooperative Agreement No. AID-OAA-L-14-00006, Kansas State University). The opinions expressed herein are those of the author(s) and do not necessarily reflect the views of the U.S. Agency for International Development.

We would like to acknowledge the International Water Management Institute (IWMI), and Ethiopian National Meteorological Agency (ENMA) for providing quality data for this research. 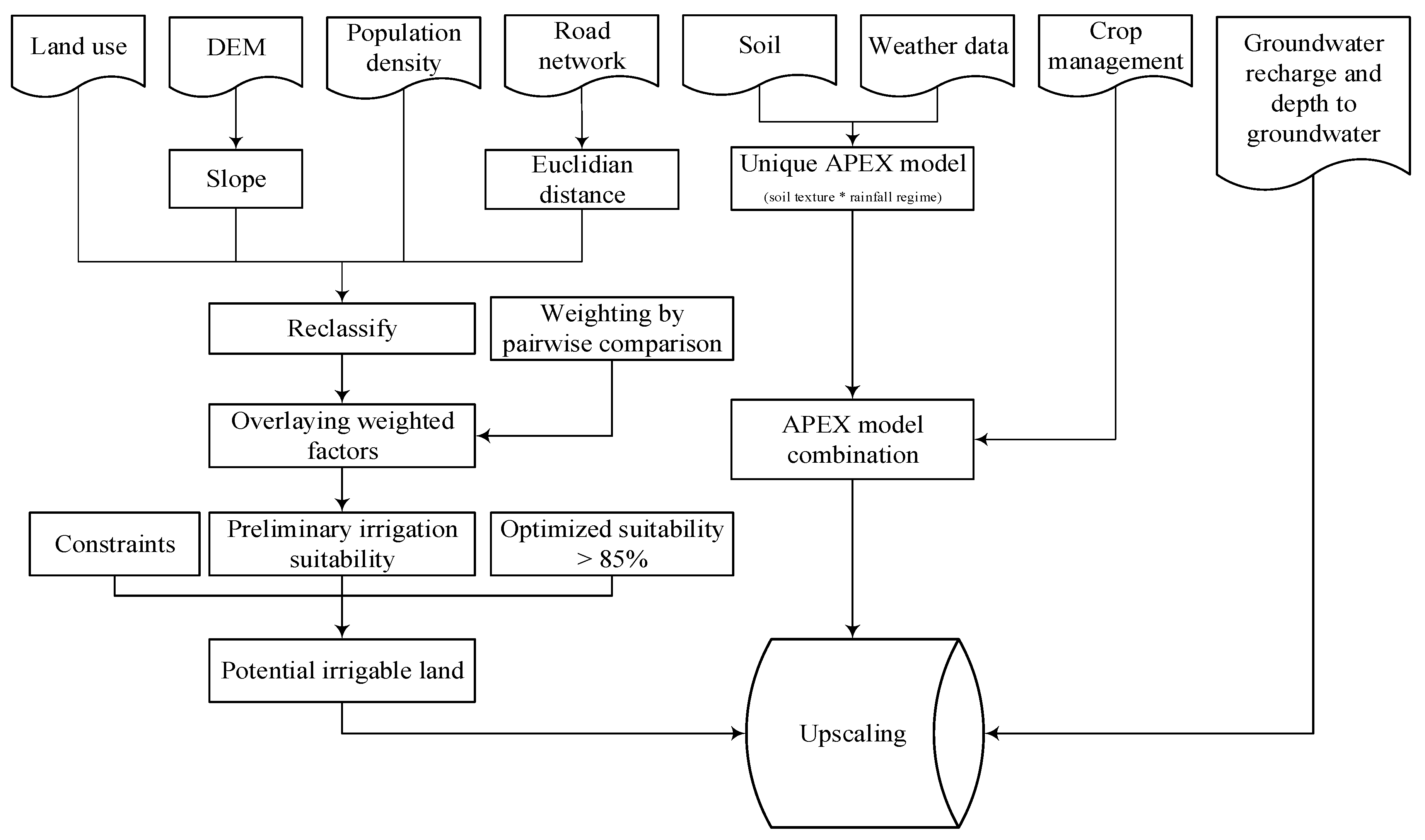 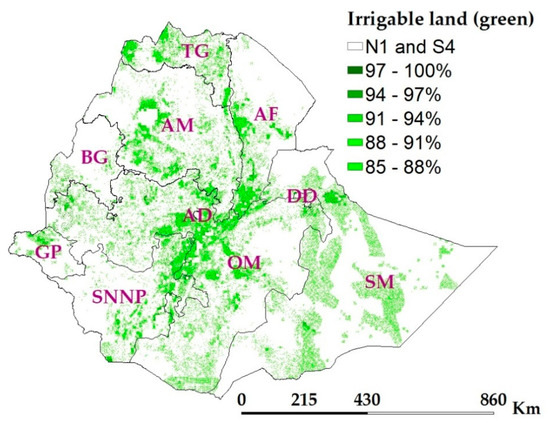 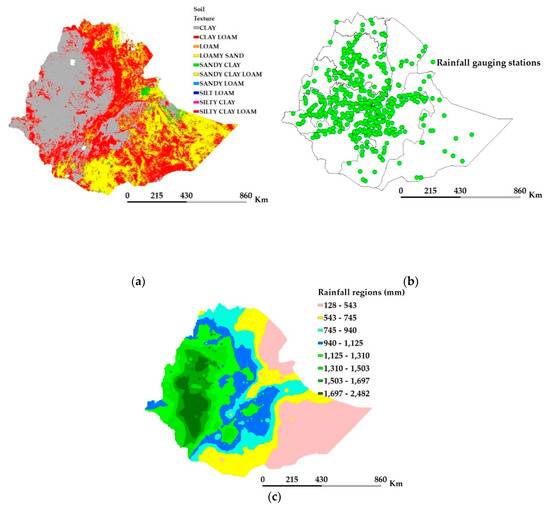 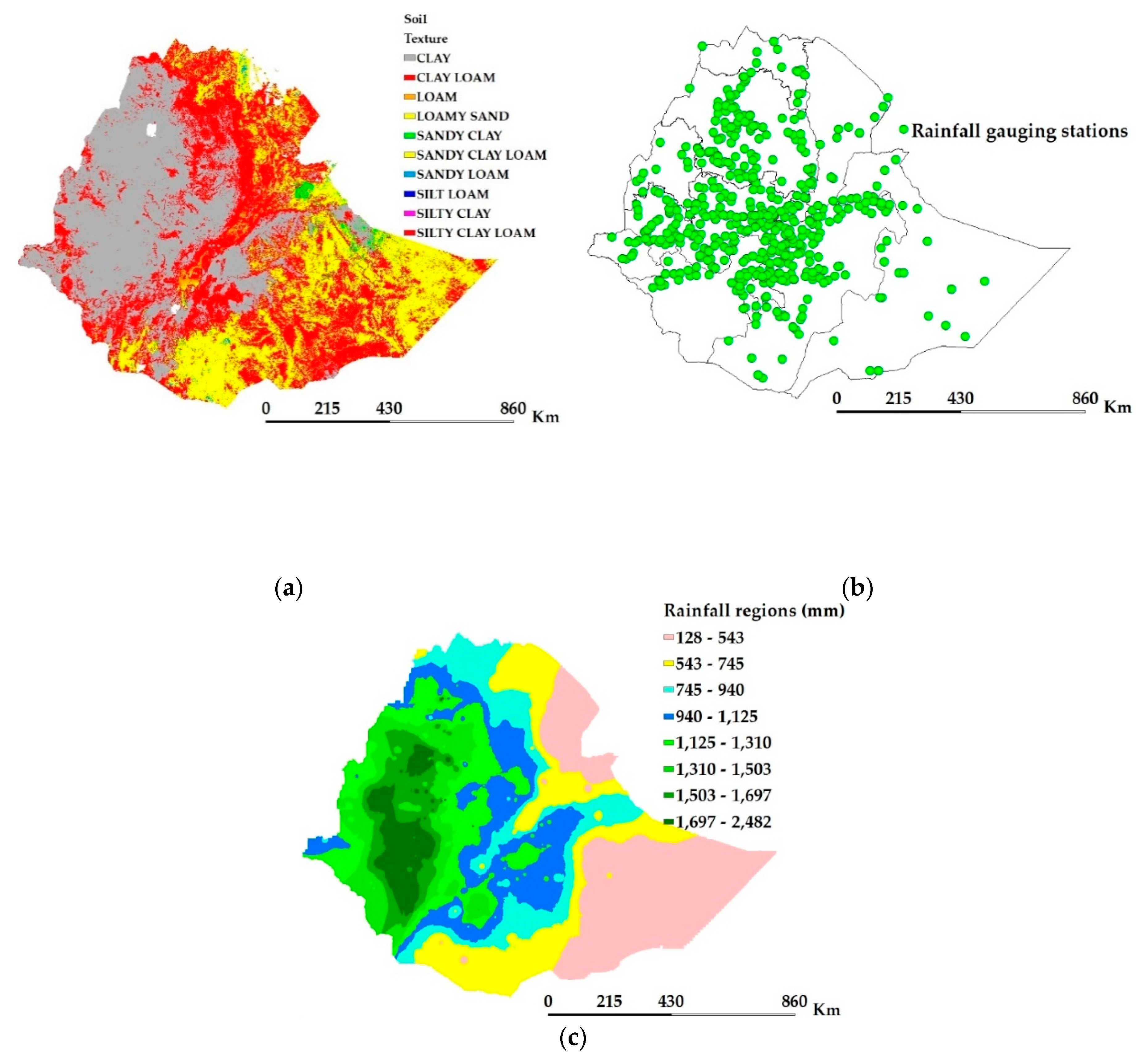 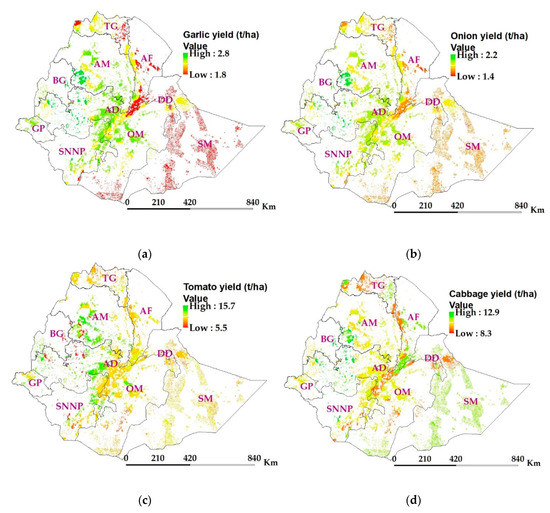 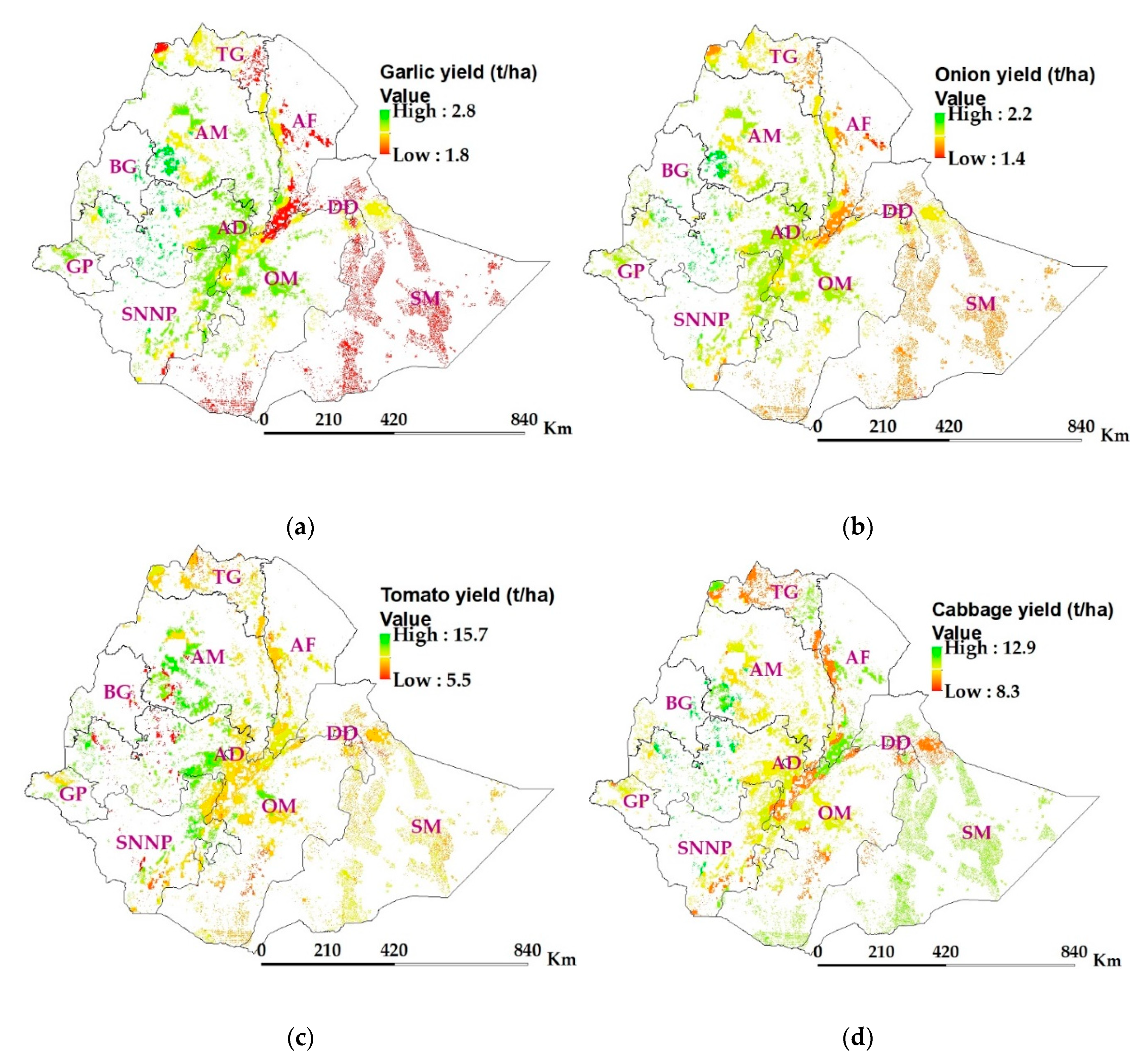 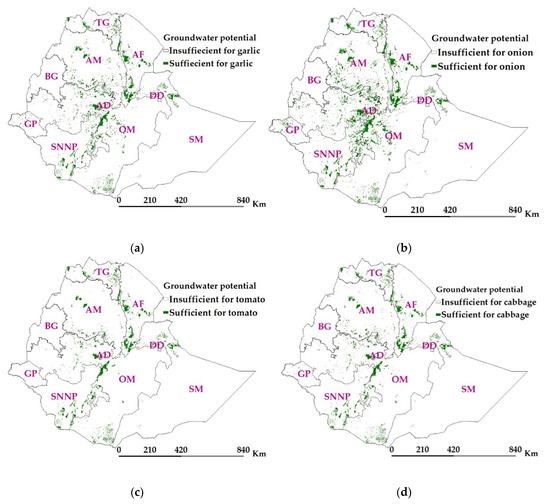 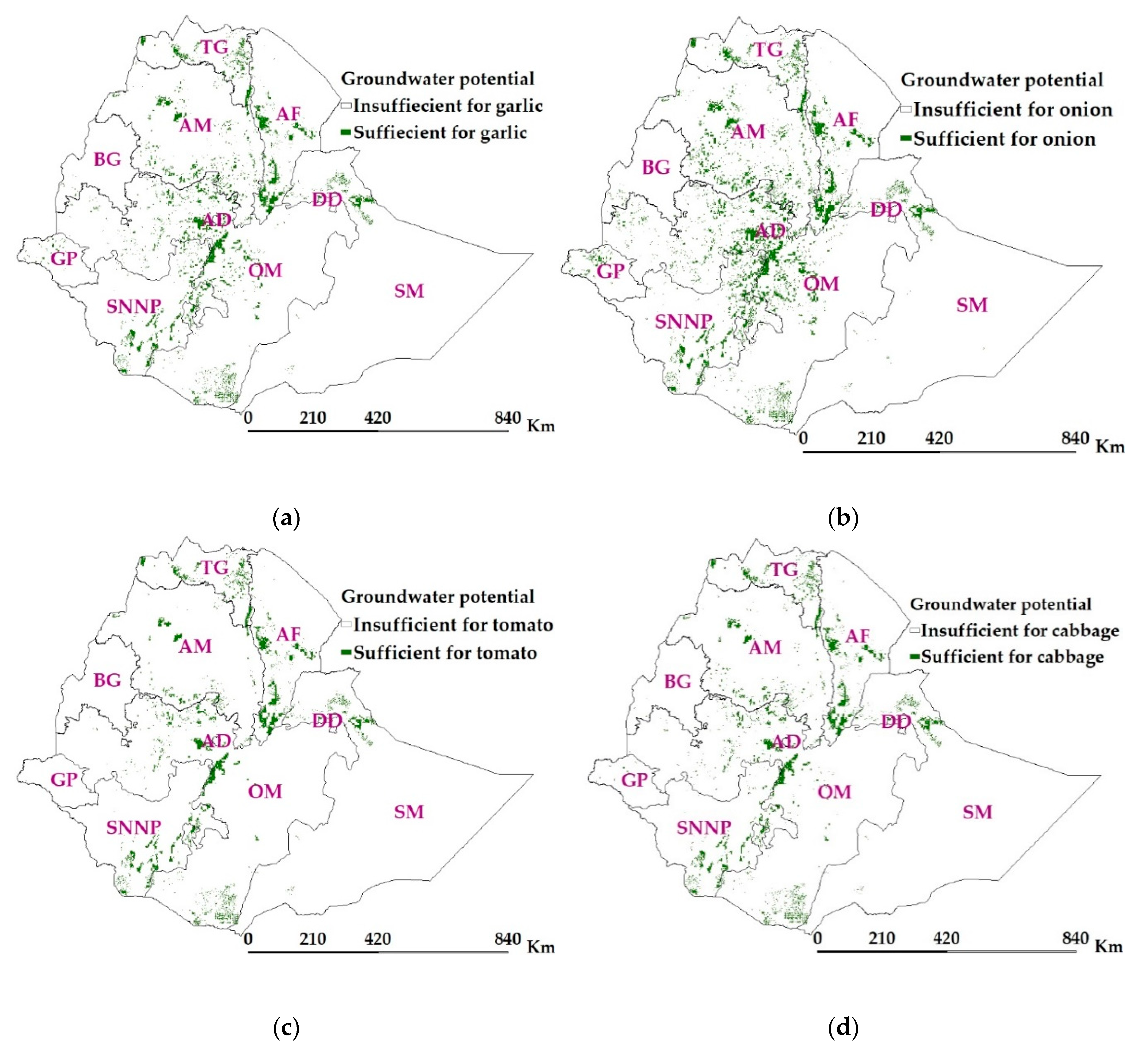