2.2. Data Treatment of the Green and Blue Water Flow

The green water flow is actually evapotranspiration, whereas the sum of surface runoff, lateral flows, and groundwater recharge is treated as blue water flow [13]. The data on green and blue water flow was obtained from simulations of the Soil and Water Assessment Tool (SWAT) [29]. In our previous research, we divide the discharge data into two periods: a calibration (1979–1987) and a validation period (1990–2004). Based on the built-in sensitivity analysis tool in SWAT, we have identified the 14 most sensitive parameters [9]. We simulate the green and blue water flow at the whole basin level using data from 1980 to 2010 [9,14]. The calibration and validation performed with SWAT at the two hydrological stations was satisfactory, as indicated by high values of Ens and R2 [9,14]. In previous research, the Ens and R2 values were more than 0.85 in the upstream and more than 0.65 in the midstream, which showed that we had good calibration and validation results for the present study. In SWAT, the Heihe River Basin area is divided into multiple sub-basins and hydrological response units (HRUs) by overlaying elevation, land cover, soil, and slope classes, the entire river basin was divided into 311 HRUs and 32 sub-basins on the basis of land use, soil, and slope classes. Further information on the model simulation, calibration, and validation can be found in Zang et al. [9,14].
The daily precipitation and temperature data were offered by the Heihe data research group [30]. The 1-km land use data for 2005 were obtained from the Institute of Resources and Environment Data Cloud Platform, Chinese Academy of Sciences (CAS) [31]. The soil data were obtained from the Harmonized World Soil Database (HWSD) with a spatial resolution of approximately 1 km [32]. We used data from 19 weather stations for our simulation. The SWAT model was used to first calculate the rainfall interception by plant canopy and then the maximum plant transpiration and soil evaporation using an approach similar to Ritchie [29]. The actual plant transpiration and soil evaporation were then calculated based on the soil moisture balance following Neitsch et al. [33]. Potential evapotranspiration was estimated by the Hargreaves method [34], and surface runoff was calculated using the Soil Conservation Service (SCS) curve number (CN) method [33]. We used the SUFI-2 (Sequential Uncertainty Fitting algorithm version 2) approach from the SWAT-CUP interface [35] to optimize the parameters. Ens and R2 values were used to evaluate the goodness of the calibration and validation process.
In the present study, we used the calibration results and parameters derived in the previous study but expanded the period to 1971–2010 and the research content to the ecosystem level. We integrated different types of forest lands (forest (arbor), forest (shrub), forest low and forest mixed) as forest ecosystems and different types of croplands (cropland in the mountains, cropland in the hills, cropland in the plain) into farmland ecosystems, and grasslands of different densities (grass high, grass middle and grass low) were classified as grassland ecosystems. The land use influences the surface runoff generation rate and evapotranspiration. In the SWAT model, we have different parameters, e.g., curve numbers, for different land cover types (e.g., grassland, crop and forest) [33].

We calculated the green and blue water flow from 1971 to 2010 according to the different land use types on the sub-basin level. Then, we classified the green and blue water flow in the ecosystem by land use type for 2005. In the present study, we used the calibration parameters derived in the previous study [9,14], but expanded the simulation period to 1970–2010. The first years were used as a warm-up period in the model to mitigate the effect of unknown initial conditions, and these years were then excluded from the analysis.
The ecosystem services data for the cropland and grassland were obtained from the China Economic and Social Development Statistics Database [36]. Based on the completeness and availability of the statistics, we collected data on food, cereal, beef and mutton production data for the period of 2000–2010 for the following reasons. First, most of the statistical data for the study area began after the 1990s, and more complete statistical data began in the 2000s. Second, we used the land use data for 2005, which is at the middle of the period of 2000–2010. Since pork and chicken are mostly raised in captivity and because food for pigs and chickens may come from cropland or from grassland, it is difficult to classify to which ecosystem these belong; thus, this study did not include pork or chicken. We selected the living wood growing stock as the ecosystem services for the forest ecosystem. The living wood growing stock refers to the total amount of trees accumulated on the land within a certain time period, including forest accumulation, sparse forest accumulation, and scattered wood accumulation [37]. The reasons we chose living wood growing stock are as follows. First, it is the most important indicator for calculating forest biomass and carbon storage. Second, it can reflect well indicators of all forest land types in the Heihe River Basin, including sparse forest land and mixed forest land. The living wood growing stock data are from the Northwest Forestry Investigation and Planning Institute of the State Forestry Bureau [38]. First, we collected the data according to the county-level administrative district and then converted it to the basin scale. Datasets that covered the entire administrative area of the basin were used directly. If the data covered only part of the administrative area in the basin, we first converted the data to a value per unit area and then multiplied that by the area of the basin.
As food production is susceptible to planting structures in different years, food production was converted into food production per unit area (kg/Ha). Additionally, the green and blue water flow for the corresponding year were also converted into a unit area (m3/Ha). To analyse the accuracy of the results, the production of beef and mutton and the living wood growing stock were also converted to the value per unit area. Correlation analysis methods were applied to investigate the relationship between green and blue water flow and the corresponding ecosystem services [39]. Then, linear regression analysis and the Pearson test method were used to examine if the result was significant in the given confidence interval or not [40].

3.1. Spatial and Temporal Distributions of Green and Blue Water Flow in the Typical Ecosystem

3.2. Ecosystem Services of Typical Ecosystems in the Heihe River Basin

As shown in Figure 5, we found that the corn yield per hectare of cropland was the highest in the Heihe River Basin, followed by wheat, and the lowest yield was the oil yield from 2000 to 2010. Because grain yield includes corn and wheat production, it also includes other types of food crops, e.g., sorghum, millet and others. Therefore, it represents the average cropland food production in the Heihe River Basin. The grain yield in the Heihe River Basin was 7503 kg/Ha, the corn yield was 8200.4 kg/Ha, the wheat yield was 6423.7 kg/Ha, and the oil yield was 2839.8 kg/Ha from 2000 to 2010, respectively (Figure 5). The mutton yield in the grassland ecosystem was greater than the beef yield from 2000 to 2010 (Figure 6). The quantity of mutton in the grassland was 11 kg/Ha, and the quantity of beef was 3.8 kg/Ha from 2000 to 2010 (Figure 6). According to Figure 7, living wood growing stock is a relatively stable indicator, unless there is a big disaster, and there will be no significant variability. As observed, the living wood growing stock had no significant variability from 2000 to 2010 with the average annual value at 31.8 m3/Ha (Figure 7).

3.3. Relationship of the Green and Blue Water Flow in Typical Ecosystems and its Ecosystem Service Functions

In this study, we analysed the spatial and temporal distribution of green and blue water flow in typical ecosystems by applying the SWAT model. After the simulation of the water resources, a detailed investigation of the relationship between green and blue water flow and ecosystem service functions in the Heihe River Basin were conducted. The major findings are as follows:
Our results provide insights into the green and blue water flow distribution in typical ecosystems and service functions throughout the Heihe River Basin. These results provide a more comprehensive understanding of the spatial and temporal distributions in ecosystems and service functions of water resources in the Heihe River Basin. This could help policymakers, administrators, and researchers to manage these resources in the context of global and regional ecosystems. This information will also provide guidance for future studies of other inland river basins in China.

We thank the Inner Mongolia Agricultural University for its support and help to this research. We also thank native English-speaking editors at American Journal Experts for language polish. We also thank my other colleagues’ valuable comments and suggestions that have helped improve the manuscript. 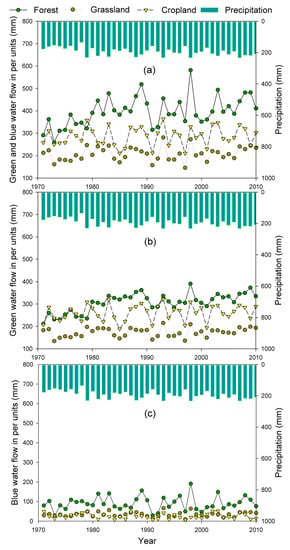 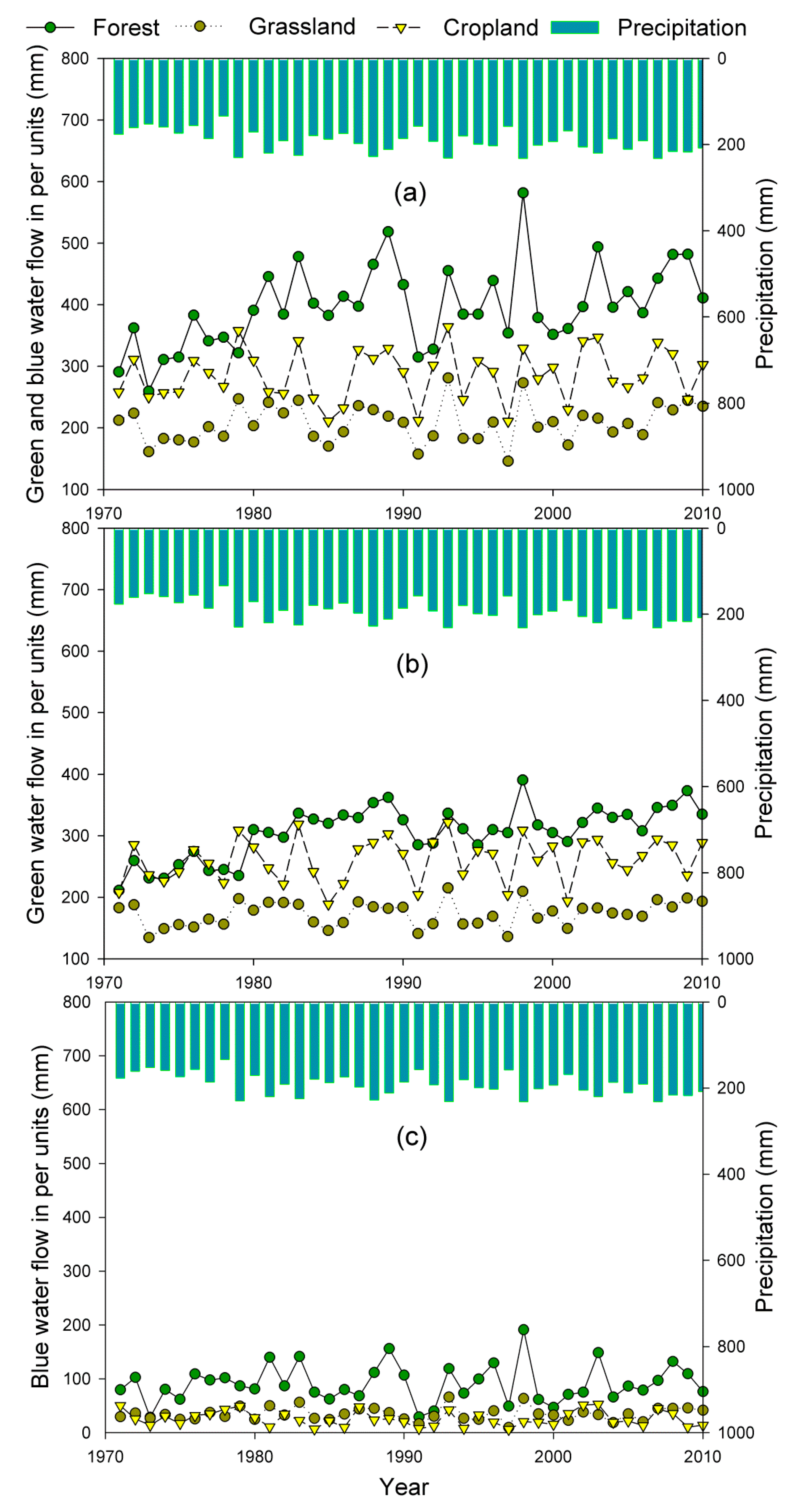 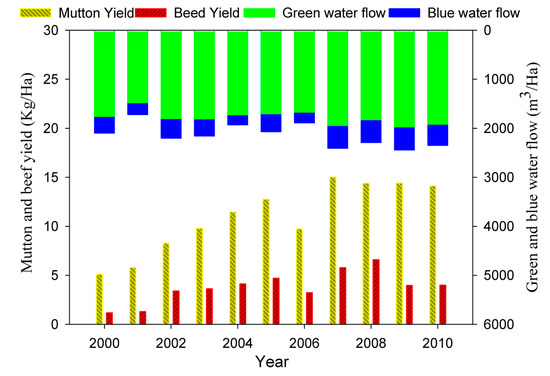 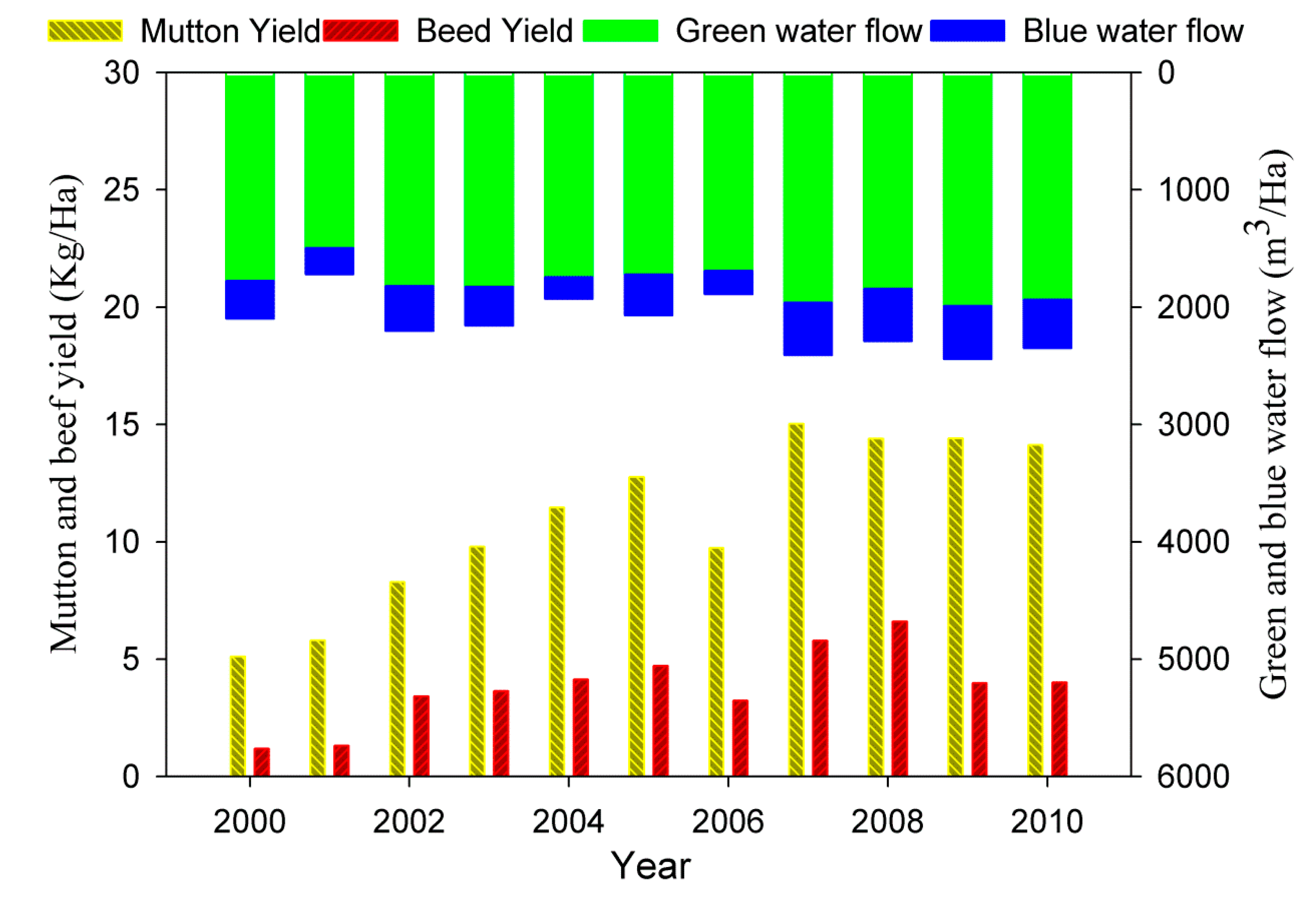