Understanding the dynamics of pesticide transport in the Malewa River and Lake Naivasha, a major fresh water resource, is critical to safeguard water quality in the basin. In this study, the soil and water assessment tool (SWAT) model was used to simulate the discharge of sediment and pesticides (notably the organochlorine residues of lindane, methoxychlor and endosulfan) into the Malewa River Basin. Model sensitivity analysis, calibration and validation were performed for both daily and monthly time steps using the sequential uncertainty fitting version 2 (SUFI-2) algorithm of the SWAT-CUP tool. Water level gauge data as well as a digital turbidity sensor (DTS-12) for suspended sediment transport were used for the SWAT calibration. Pesticide residues were measured at Upper and Down Malewa locations using a passive sampling technique and their quantity was determined using laboratory gas chromatography. The sensitivity analysis results showed that curve number (CN2), universal soil loss equation erodibility factor (USLE-K) and pesticide application efficiency (AP_EF) formed the most sensitive parameters for discharge, sediment and pesticide simulations, respectively. In addition, SWAT model calibration and validation showed better results for monthly discharge simulations than for daily discharge simulations. Similarly, the results obtained for the monthly sediment calibration demonstrated more match between measured and simulated data as compared to the simulation at daily steps. Comparison between the simulated and measured pesticide concentrations at upper Malewa and down Malewa locations demonstrated that although the model mostly overestimated pesticide loadings, there was a positive association between the pesticide measurements and the simulations. Higher concentrations of pesticides were found between May and mid-July. The similarity between measured and simulated pesticides shows the potential of the SWAT model as initial evaluation modelling tool for upstream to downstream suspended sediment and pesticide transport in catchments. View Full-Text
Keywords: SWAT; hydrologic simulation; pesticide residues; passive sampling; sediment; Malewa River SWAT; hydrologic simulation; pesticide residues; passive sampling; sediment; Malewa River
►▼ Show Figures 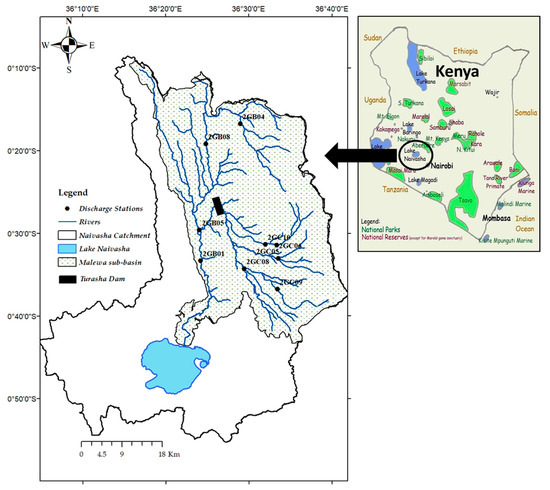