Applicability of ε-Support Vector Machine and Artificial Neural Network for Flood Forecasting in Humid, Semi-Humid and Semi-Arid Basins in China
Next Article in Special Issue

The Gaza Strip forms a transition zone between the semi-humid coastal zone in the north, the semi-arid zone in the east, and the Sinai desert in the south. Groundwater is the only water source for 1.94 million inhabitants, where the only fresh replenishment water for the aquifer comes from rainfall. This study focuses on testing a newly developed GIS tool to estimate the spatial and temporal distribution of runoff and recharge from rainfall. The estimation of surface runoff was made using the Soil Conservation Services Curve Number Method, while groundwater recharge was estimated using Thornthwaite and Mather’s Soil Moisture Balance approach. The new tool was applied to the Gaza aquifer for the year 1935 and for the period from 1973 to 2016. A comparison was made between the results obtained with the developed GIS tool and the frequently used Thiessen polygon method for rainfall distribution. Runoff and recharge were estimated for the year 1935 (prior to development) to compare with the current developed conditions. It was found that the built-up and sand dune areas stand in an inverse relationship, where the former is replacing the latter (built-up area expanded from 30.1 km2 in 1982 to 92.1 km2 in 2010). Recharge takes place in the sand dune area, whereas runoff increases in the built-up area. Due to development, runoff almost tripled from 9 million m3 in 1982 to 22.9 million m3 in 2010, while groundwater recharge was reduced from 27.3 million m3 in 1982 to 23 million m3 in 2010, even though the rainfall increased between 1982 and 2010 by 11%. Comparison between the newly developed GIS tool and the Thiessen polygon-based estimation shows that the former leads to higher values of runoff and recharge for dry years. View Full-Text
Keywords: GIS GRID; Thiessen polygon; Soil Moisture Balance approach; rainfall; runoff; recharge; Gaza Strip GIS GRID; Thiessen polygon; Soil Moisture Balance approach; rainfall; runoff; recharge; Gaza Strip
►▼ Show Figures 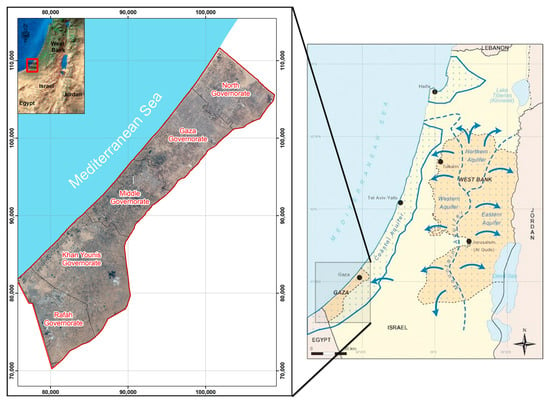