Atmospheric Rivers over the Arctic: Lagrangian Characterisation of Their Moisture Sources

In recent years, the Arctic has become a subject of special interest due to the drastic effect of climate change over the region. Despite that there are several mechanisms that influence the Arctic region; some recent studies have suggested significant influences of moisture transport over the observed loss of sea ice. Moisture transport can affect the region in different ways: direct precipitation over the region, radiative effect from the cloud cover and through the release of latent heat. Atmospheric rivers (ARs) represent one of the main events involved in moisture transport from the tropics to the mid-latitudes and despite having been shown especially relevant on the northward advection, their effect over the Arctic has not been deeply investigated. The aim of this work was to establish the groundwork for future studies about the effect of ARs linked to moisture transport over the Arctic region. For this purpose, an automated algorithm was used to identify regions of maximum AR occurrence over the Arctic. This was done by analysing the number of AR detections every month over a band of 10° of latitude centred on 60° N. The Lagrangian model FLEXPART was used to find the areas where the ARs take their moisture to the Arctic. Using this model, the anomalous moisture contribution to these baroclinic structures was analysed taking into account only the dates of AR occurrence. From the results, it appears that the main moisture sources for AR events extend over the North Atlantic and North Pacific oceans; moreover, the local input of moisture over the region of maximum AR occurrence seems to be especially relevant. In general terms, moisture comes from major evaporative areas over the western part of the oceanic regions in the band between 30° and 40° N for most months in the year, showing a continental origin in the summer months. This behaviour agrees with the climatological moisture transport into the Arctic determined in previous studies. However, in special association with AR events, an intensification of local moisture uptake is observed over the area of maximum AR activity and nearby. The study of the origin of this moisture and associated anomalies for Arctic ARs is an important step in the analysis of the effect of these structures on the Arctic environment. View Full-Text
Keywords: atmospheric rivers; Arctic; moisture transport; FLEXPART atmospheric rivers; Arctic; moisture transport; FLEXPART
►▼ Show Figures 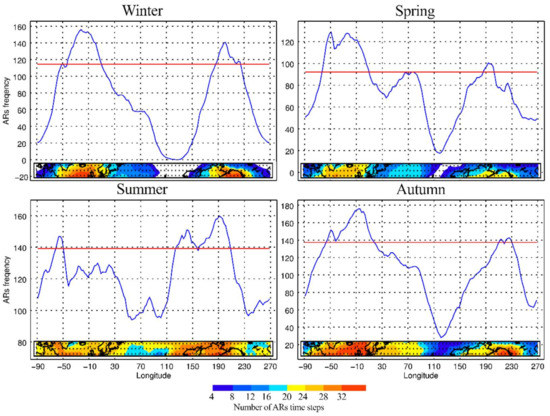