Reservoir operation rules play an important role in regions economic development. Meanwhile, hedging policies are mostly applied for municipal, industrial, and irrigation water supplies from reservoirs and it is less used for reservoir operation for hydropower generation. The concept of hedging and rationing factors can be used to maintain the water in a reservoir for the sake of increasing water storage and water head for future use. However, water storage and head are the key factors in operation of reservoir systems for hydropower generation. This study investigates the applicability of seven competing hedging policies including four customary forms of hedging (1PHP, 2PHP, 3PHP, DHP) and three new forms of hedging rules (SOPHP, BSOPHP, SHPHP) for reservoir operation for hydropower generation. The models were constructed in MATLAB R2011b based on the characteristics of the Batang Padang hydropower reservoir system, Malaysia. In order to maximize the output of power generation in operational periods (2003–2009), three optimization algorithms namely particle swarm optimization (PSO), genetic algorithm (GA), and hybrid PSO-GA were linked to one of the constructed model (1PHP as a test) to find the most effective algorithm. Since the results demonstrated the superiority of the hybrid PSO-GA algorithm compared to either PSO or GA, the hybrid PSO-GA were linked to each constructed model in order to find the optimal decision variables of each model. The proposed methodology was validated using monthly data from 2010–2012. The results showed that there are no significant difference between the output of monthly mean power generation during 2003–2009 and 2010–2012.The results declared that by applying the proposed policies, the output of power generation could increase by 13% with respect to the historical management. Moreover, the discrepancies between mean power generations from highest to lowest months were reduced from 49 MW to 26 MW, which is almost half. This means that hedging policies could efficiently distribute the water-supply and power-supply in the operational period and increase the stability of the system. Among the studied hedging policies, SHPHP is the most convenient policy for hydropower reservoir operation and gave the best result. View Full-Text
Keywords: hedging policies; hydropower; reservoir system; operation; optimization; hybrid PSO-GA hedging policies; hydropower; reservoir system; operation; optimization; hybrid PSO-GA
►▼ Show Figures 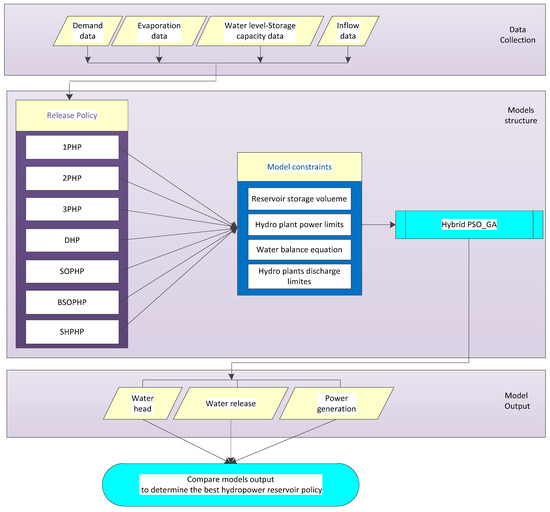