The prediction of winter flooding is a complicated task since it is affected by many meteorological and hydraulic factors. Typically, information on river ice conditions is based on historical observations, which are usually incomplete. Recently, data have been supplemented by information extracted from satellite images. All the above mentioned factors provide a good background of the characteristics of ice processes, but are not sufficient for a detailed analysis of river ice, which is highly dynamic and has a local extent. The main aim of this paper is to show the possibility of the prediction of ice jams in a river using a mathematical model. The case of the Odra River was used here. Within the Lower and Middle Odra River, the most significant flood risk, in winter conditions, is posed by ice jams created when movable ice is stopped by existing obstacles such as shallow areas in the riverbed, the narrowing of the riverbed, and other obstacles caused as a result of sudden changes of the river current, backwater from sea waters, and north winds, which contribute to the creation of ice jams. This in turn causes the damming of water and flooding of adjacent areas. The DynaRICE model was implemented at two locations along the Odra River, previously selected as ice-prone areas. Also, a thermal simulation of ice cover formation on Lake Dąbie was shown with variable discharge. The results of numerical simulations showed a high risk of ice jamming on the Odra River, created within one day of ice moving downstream. The prediction of the place and timing, as well as the extent, of the ice jam is impossible without the application of a robust mathematical model. View Full-Text
Keywords: ice dynamics; ice jam; Odra River; icebreaking ice dynamics; ice jam; Odra River; icebreaking
►▼ Show Figures 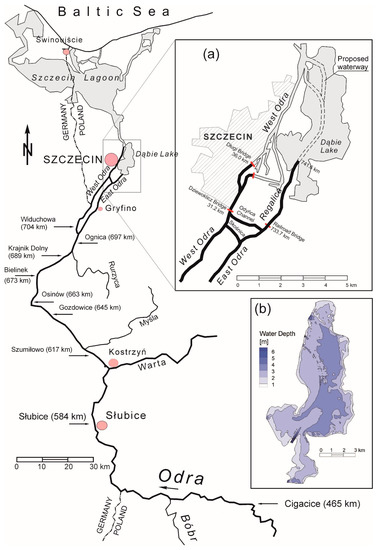