Adsorption of Aclonifen, Alachlor, Cd and Cu onto Natural River Suspended Matter in the Context of Multi-Pollutions: Influence of Contaminant Co-Presence and Order of Input into the Aqueous Solution
Next Article in Special Issue

Tropical forests play an important role as a reservoir of carbon and biodiversity, specifically forests in the Brazilian Amazon. However, the last decades have been marked by important changes in the Amazon, particularly those associated with climatic extremes. Quantifying the variability of rainfall patterns, hence, is essential for understanding changes and impacts of climate upon this ecosystem. The aim of this study was to analyse spatiotemporal trends in rainfall along the Brazilian Legal Amazon between 1998 and 2015. For this purpose, rainfall data derived from the Tropical Rainfall Measuring Mission satellite (TRMM) and nonparametric statistical methods, such as Mann–Kendall and Sen’s Slope, were used. Through this approach, some patterns were identified. No evidence of significant rainfall trends (p ≤ 0.05) for annual or monthly (except for September, which showed a significant negative trend) averages was found. However, significant monthly negative rainfall anomalies were found in 1998, 2005, 2010, and 2015, and positive in 1999, 2000, 2004, 2009, and 2013. The annual pixel-by-pixel analysis showed that 92.3% of the Brazilian Amazon had no rainfall trend during the period analysed, 4.2% had significant negative trends (p ≤ 0.05), and another 3.5% had significant positive trends (p ≤ 0.05). Despite no clear temporal rainfall trends for most of the Amazon had negative trends for September, corresponding to the peak of dry season in the majority of the region, and negative rainfall anomalies found in 22% of the years analysed, which indicate that water-dependent ecological processes may be negatively affected. Moreover, these processes may be under increased risk of disruption resulting from other drought-related events, such as wildfires, which are expect to be intensified by rainfall reduction during the Amazonian dry season. View Full-Text
Keywords: amazon forest; droughts; floods; Mann–Kendall test; TRMM amazon forest; droughts; floods; Mann–Kendall test; TRMM
►▼ Show Figures 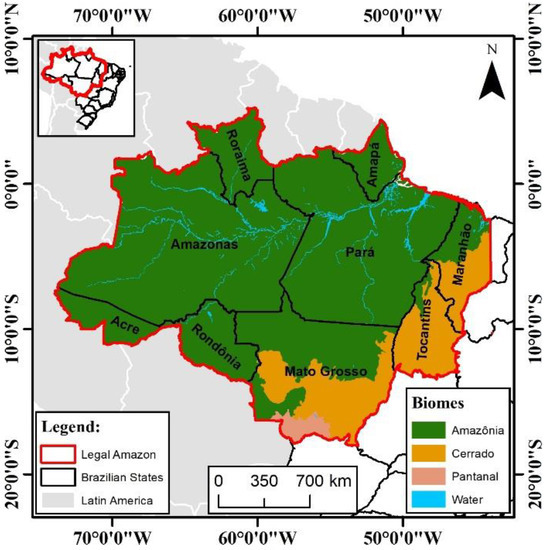