Assessing the Contribution of Demographic Growth, Climate Change, and the Refugee Crisis on Seawater Intrusion in the Tripoli Aquifer
Next Article in Special Issue

Microbial Function and Hydrochemistry within a Stratified Anchialine Sinkhole: A Window into Coastal Aquifer Interactions

Anchialine sinkholes provide insight into coastal aquifer systems and coastal mixing processes. Aquifer microbial community function is usually inferred from hydrochemical information, but there are few direct studies of microbial communities in the Floridan Aquifer. Hospital Hole is a 43 m-deep stratified sinkhole under the Weeki Wachee River, FL, with three distinct brackish layers: a hypoxic layer, a chemocline and a sulfidic anoxic layer. Illumina sequencing and bioinformatic tools were used to reconstruct metabolic functions and interactions of microbial communities in each layer. Each layer appears to originate from different parts of the coastal mixing zone and has a distinct microbial community with unique functions, which are influenced by the respective hydrochemistry. Sulfide oxidation and nitrate reduction are the most abundant functions. Syntrophy between methane oxidizers, methanogens and sulfate reducers is present. Similarities between the hydrochemistry and potential connectivity of Hospital Hole and the Floridan Aquifer coastal mixing zone suggest that microbial communities of Hospital Hole could be a surrogate for the coastal mixing zone of the aquifer in the absence of direct studies. Understanding how groundwater microbial communities react to saltwater intrusion and nutrient flux will be useful in predicting how coastal aquifer regions might react to anthropogenic change. View Full-Text
Keywords: karst; microbial ecology; sinkholes; bio-hydrochemistry; nutrient cycling; extremophiles karst; microbial ecology; sinkholes; bio-hydrochemistry; nutrient cycling; extremophiles
►▼ Show Figures 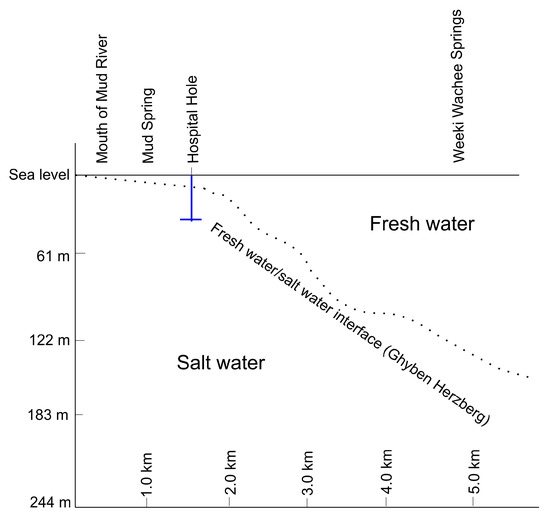