Thermoelectric power plants in inland regions use primarily riverine water for cooling. The future availability of riverine water will be affected by climatic change. Power generation is expected to grow throughout the 21st century, accompanied by growth in cooling water demand. We estimated cooling water sufficiency globally under the Shared Socioeconomic Pathway 2 scenario with and without climate mitigation throughout the 21st century (2006–2099) at a spatial resolution of 0.5° × 0.5°. We used the Asia-Pacific Integrated Model Computable General Equilibrium Model (AIM/CGE) to project future thermoelectric cooling-water requirements in 17 global regions with no hydrological constraint on water availability, and the H08 global hydrological model to assess whether consumptive water requirements could be met under particular spatiotemporal and hydrological constraints. The results show that cooling water sufficiency will decrease by 7.9% and 11.4% in 2040–2069 (11.3% and 18.6% in 2070–2099) with and without climate mitigation, respectively. A distinct difference was found between with and without climate mitigation in the Middle East and Africa. The predicted insufficiency was attributable primarily to changes in river flow regimes, particularly a general decrease in low flow levels, and to increased water requirements for thermoelectric power generation and other sectors. The results imply that the growing water demand projected by AIM/CGE will not be fulfilled sustainably in many parts of the world, hence considerable additional efforts of reducing water consumption will be required to secure electric power supply. This confirms the importance of coupling integrated assessment models and global hydrological models for consistent water-energy nexus analyses. View Full-Text
Keywords: thermoelectric cooling water; climate change thermoelectric cooling water; climate change
►▼ Show Figures 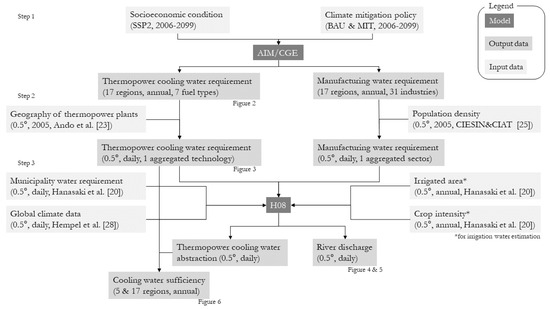