Evapotranspiration (ET) is a critical component of the water cycle, and it plays an important role in global water exchange and energy flow. However, accurate estimation and numerical simulation of regional ET remain difficult. In this work, based on the water balance equation, an improved regional ET estimating approach was developed by using Gravity Recovery and Climate Experiment (GRACE), daily precipitation, and discharge data. Firstly, the method and algorithm were validated by simulation study. Compared with ET estimated from previous methods, the result derived from our method present significant improvement, with the correlation coefficient great than 0.9. Secondly, using our improved method, the spatially averaged ET over the Yangtze River Basin (YRB) was computed for the period 2003–2013. The ET estimations were in good consistency with different ET products, and the mean annual value of ET estimation over the YRB was close to the difference between precipitation and discharge over the YRB. Thirdly, the comparison between ET estimation and independent estimates of meteorological factors and soil moisture over the entire YRB were conducted through the entire YRB. The analysis indicated that near-surface temperature, as responsive to atmospheric demand, was the limiting factor of time variation of ET, with the correlation coefficients of 0.69. We also analyzed the relationship between the mean annual ET and atmospheric demand for seven subcatchments of the YRB, which indicated that the spatial distribution characteristics of ET estimated by our method were in accord with atmospheric conditions. These results indicated the good performance of our improved approach in estimating ET variations over the YRB. It also demonstrates the applicability of GRACE to the analysis of hydrological features such as regional ET. View Full-Text
Keywords: evapotranspiration; GRACE; Yangtze River Basin; water balance equation evapotranspiration; GRACE; Yangtze River Basin; water balance equation
►▼ Show Figures 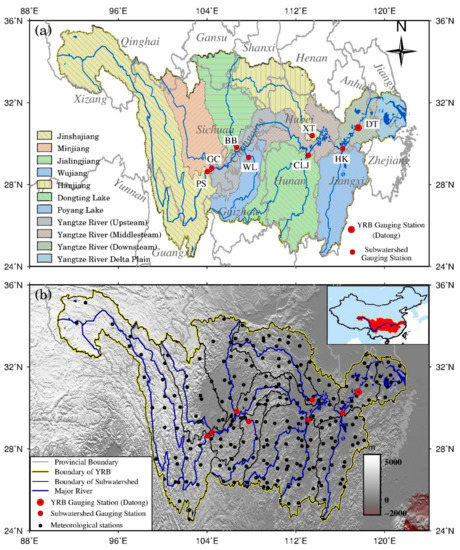