The Ethiopian Rift Valley lakes have been subjected to environmental and ecological changes due to recent development endeavors and natural phenomena, which are visible in the alterations to the quality and quantity of the water resources. Monitoring lakes for temporal and spatial alterations has become a valuable indicator of environmental change. In this regard, hydrographic information has a paramount importance. The first extensive hydrographic survey of Lake Hawassa was conducted in 1999. In this study, a bathymetric map was prepared using advances in global positioning systems, portable sonar sounder technology, geostatistics, remote sensing and geographic information system (GIS) software analysis tools with the aim of detecting morphometric changes. Results showed that the surface area of Lake Hawassa increased by 7.5% in 1999 and 3.2% in 2011 from that of 1985. Water volume decreased by 17% between 1999 and 2011. Silt accumulated over more than 50% of the bed surface has caused a 4% loss of the lake’s storage capacity. The sedimentation patterns identified may have been strongly impacted by anthropogenic activities including urbanization and farming practices located on the northern, eastern and western sides of the lake watershed. The study demonstrated this geostatistical modeling approach to be a rapid and cost-effective method for bathymetric mapping. View Full-Text
Keywords: bathymetry; Ethiopian rift; geostatistics; Lake Hawassa; lake morphometry bathymetry; Ethiopian rift; geostatistics; Lake Hawassa; lake morphometry
►▼ Show Figures 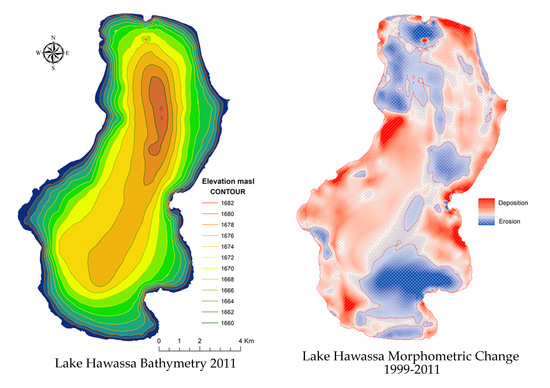