Assessment of Excess Sludge Ultrasonic, Mechanical and Hybrid Pretreatment in Relation to the Energy Parameters
Next Article in Special Issue

Some Aspects of Turbulent Mixing of Jets in the Marine Environment

Waves and Currents at a River Mouth: The Role of Macrovortices, Sub-Grid Turbulence and Seabed Friction

Numerical experiments of wave-current interaction have been performed to investigate the evolution and dissipation of horizontal large-scale vortical structures generated by differential wave breaking and current shearing at river mouths. Specific focus is on the role played by turbulence of scales smaller than the water depth and by seabed friction on the dissipation of the mentioned macrovortices. The analysis reveals two regions of turbulence generation: at the river mouth, and along the curved seaward boundary of the shoal. In the latter zone, macrovortices are formed due to differential wave breaking induced by the sudden variation in water depth and enhanced by opposing currents which favour wave steepening. Such vortices are then advected towards the shore. Among the dissipative mechanisms, dissipation induced by seabed friction is deemed dominant, in particular in the most shallow waters of the shoal. Sub-grid turbulence dissipation, conversely, is more efficient offshore, although exerting some effect also over the shoal when supported by the continuous action of waves. View Full-Text
Keywords: river mouth; flow mixing; nonlinear shallow water equations; macrovortices; sub-grid turbulence; seabed friction river mouth; flow mixing; nonlinear shallow water equations; macrovortices; sub-grid turbulence; seabed friction
►▼ Show Figures 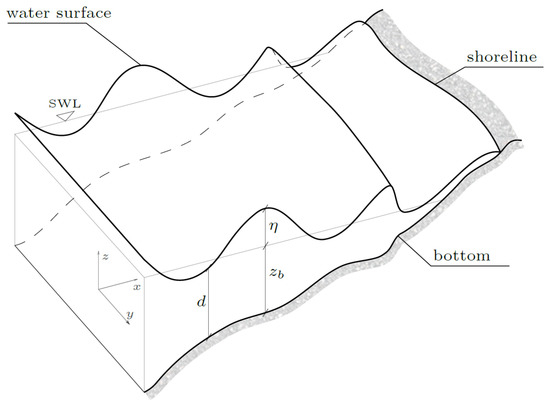