:
Estimating the extreme values of significant wave height (HS), generally described by the HS return period TR function HS(TR) and by its confidence intervals, is a necessity in many branches of coastal science and engineering. The availability of indirect wave data generated by global and regional wind and wave model chains have brought radical changes to the estimation procedures of such probability distribution—weather and wave modeling systems are routinely run all over the world, and HS time series for each grid point are produced and published after assimilation (analysis) of the ground truth. However, while the sources of such indirect data are numerous, and generally of good quality, many aspects of their procedures are hidden to the users, who cannot evaluate the reliability and the limits of the HS(TR) deriving from such data. In order to provide a simple engineering tool to evaluate the probability of extreme sea-states as well as the quality of such estimates, we propose here a procedure based on integrating HS time series generated by model chains with those recorded by wave buoys in the same area.
Keywords:
wave extreme events; Mediterranean Sea; North Atlantic Spanish coasts; Gulf of Mexico; wave modeling; small scale storm variations

Six-hour ECMWF ERA-Interim re-analysis data were used throughout the work. However, since in two locations (South Mediterranean Italian coasts and Gulf of Mexico) NOAA data with adequate resolution are also available, these have been added to provide additional elements.

Direct data for this area are from the six Italian Data Buoy Network (RON) buoys reported in Figure 2.
More specific details about RON can be found in [6]. Table 1 reports the exact location and dataset time extension for the six considered buoys.
For indirect data, both the global six-hour analysis ECMWF ERA-Interim and the Mediterranean (med_10m) nested grid three-hourly NOAA-MMAB products were used. The former, provided on a 1° × 1° latitude/longitude grid, were acquired for an area between 36° N–42° N of latitude and 7° E–20° E of longitude; the latter, on a 10′ × 10′ (about 0.167° × 0.167°) latitude/longitude grid, cover an area between 30° S–48° N of latitude and 7° W–43° E of longitude (see Table 1).

For this area, direct data were sampled from the five buoys reported in Figure 3. The exact buoy location and relative dataset time extension are reported in Table 2.
ECMWF ERA-Interim (global four analyses per day) indirect data were used. They are provided on a 1° × 1° latitude/longitude grid and were acquired for an area between 40° N–46° N and 12° W–2° W of longitude (see Table 2).

The computations were separately carried out as described above for all the buoys in each of the three regions. The buoys in each region are close enough to be considered similar from a meteorological point of view; it is also worth noting that in one of the regions (Southern Italian coast) the position of each of the buoys with respect to the coast are very different from each other.

The dataset extension, threshold and mean rate values both for direct and indirect data relative to each location are reported in Table 4. The NOAA model data are included only as a comparison and were not used in the estimation procedure.
Results are shown in Table 5 and Table 6 (respectively for the ECMWF and NOAA model data), which report the various parameters of the curves for all the buoy locations in the area.

The dataset extension, threshold and mean rate values λ both for direct and indirect data relative to each location are reported in Table 7.
Results are shown in Table 8, which reports the various parameters of the curves for all the buoy locations in the area.

Data relevant to each location for direct and indirect data are reported in the following Table 9. NOAA model data are included only as a comparison and have not been used in the estimation procedure.
Results are shown in Table 10 and Table 11 (respectively for the ECMWF and NOAA model data), which report the various parameters of the curves for all the buoy locations in the area.

The first—if perhaps expected—result of the work is that the difference between the model derived curve HM(TR) and the experimental curve is always negative, i.e., the model results present a consistent negative bias in the estimation of extreme events. There are of course various reasons why this is the case—in the first place the already mentioned limitations due to the model’s inherent limits [38,39,40]; a further practical reason is the effect, also discussed above, caused by the longer sampling time of the model data in comparison with the high data sampling of modern wave buoys (30′), which also coincide with the standard engineering practice.
Once the bias curve for a given area is computed, HS(TR) can easily be obtained by adding the bias to the model values HM(TR). HS(TR) always presents a marked improvement in comparison with the simple model data HM(TR), so it always make sense to correct model derived data with an estimate of the error distribution in the local buoy wave meters.
Another important aspect is the information gained on the uncertainty of the model-derived extreme value curves by considering the variation of statistical parameters over a given area (spatial analysis). Confidence intervals have been provided for 68% (±1σ) and 95% (±2σ), and it was found that most of the HD(TR) curves derived from real data at the buoy locations fall well within the ±1σ interval of the estimated HS(TR), all of them however being actually within the ±2σ curves. Given the relatively small number of buoys in each sea region, this behavior it is coherent with what could have been expected. More importantly, perhaps, HS(TR) always showed a marked improvement in comparison with the simple model data HM(TR). This also holds for the particular case of the Southern Italian buoys, which are all located in the same area, but face different directions due to the complex coast morphology. The fact that the results are not much different from those in the other directions, seems to confirm that the wave models are accurate enough to take the wave generation into account, and that most of the uncertainty derives from the wind modelling part of the chain.

The paper shows that a probabilistic estimate HS(TR) of the significant wave height HS as a function of the return time TR is possible by comparing wave buoy (direct) and model (indirect) data in a given area. HS(TR) functions obtained from historical buoy data have been compared with similar curves derived from indirect data from both ECMWF and NOAA archives for three distinct areas: the Gulf of Mexico, the North Atlantic waters along the Spanish coasts and part of the Mediterranean Sea surrounding Italy. The comparison shows a systematic negative bias, thus proving that model curves always underrate experimental ones. The error distribution of the model of the data was studied on a geographical basis, so that a HS(TR) curve and its confidence values can be evaluated for any model grid point in the area. Widely diffused, freely available and reliable model data archives such as ECMWF and NOAA analysis and reanalysis data can thus be used for engineering purposes.
While the objective of the work is not to suggest a particular extreme value distribution or estimation methodology, a general procedure has been provided to improve the reliability of model data for EVA; such a procedure, already in the present form, can also be used to evaluate the suitability of a given model data archive to the estimation of the probability of extreme sea states.
Further development should include testing the procedure with some of the new commercially available model data sets which present a higher spatial and temporal resolution. This would allow an independent assessment of their quality as well as—possibly—a better estimate of the extreme value SWH. 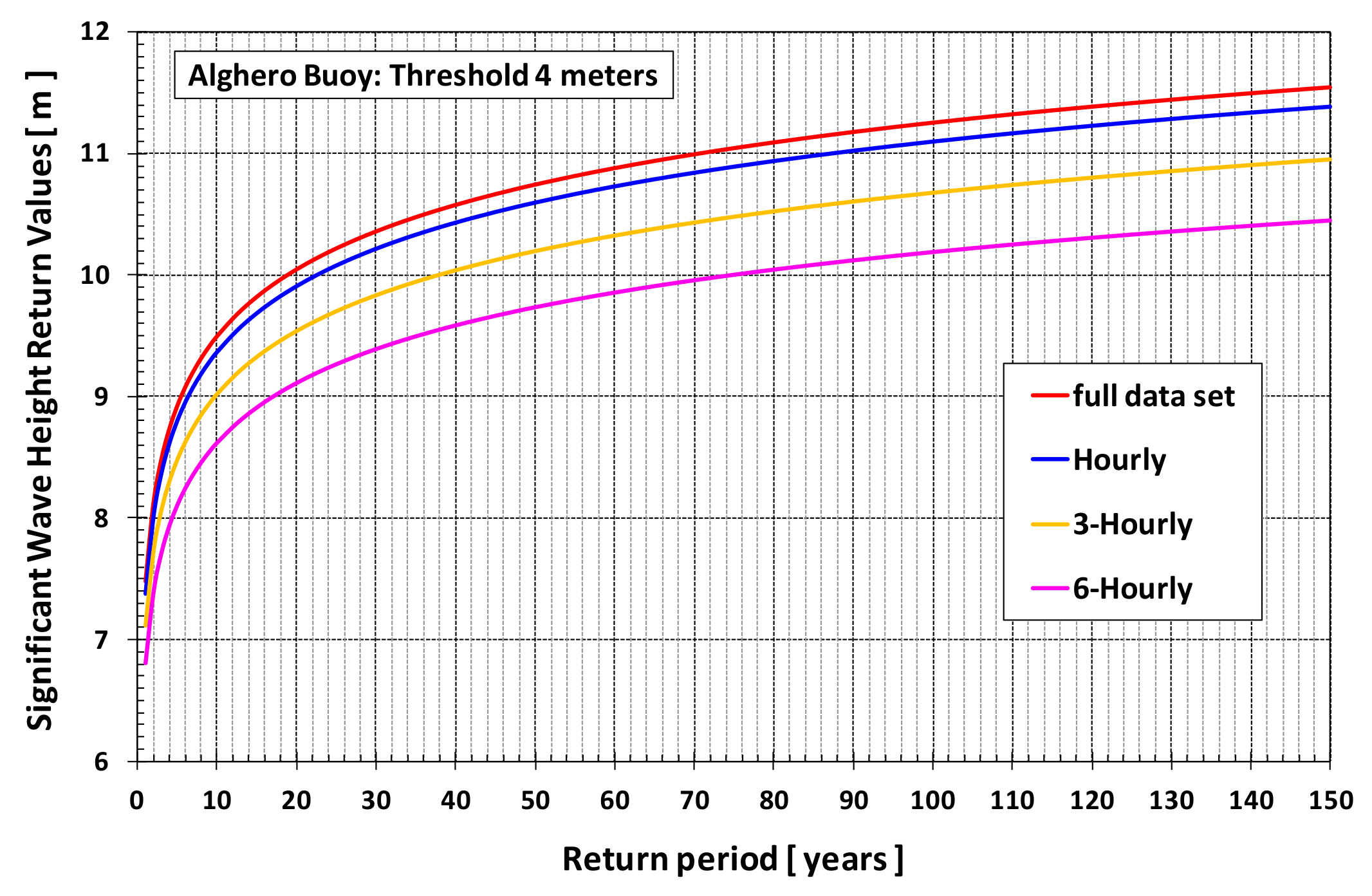 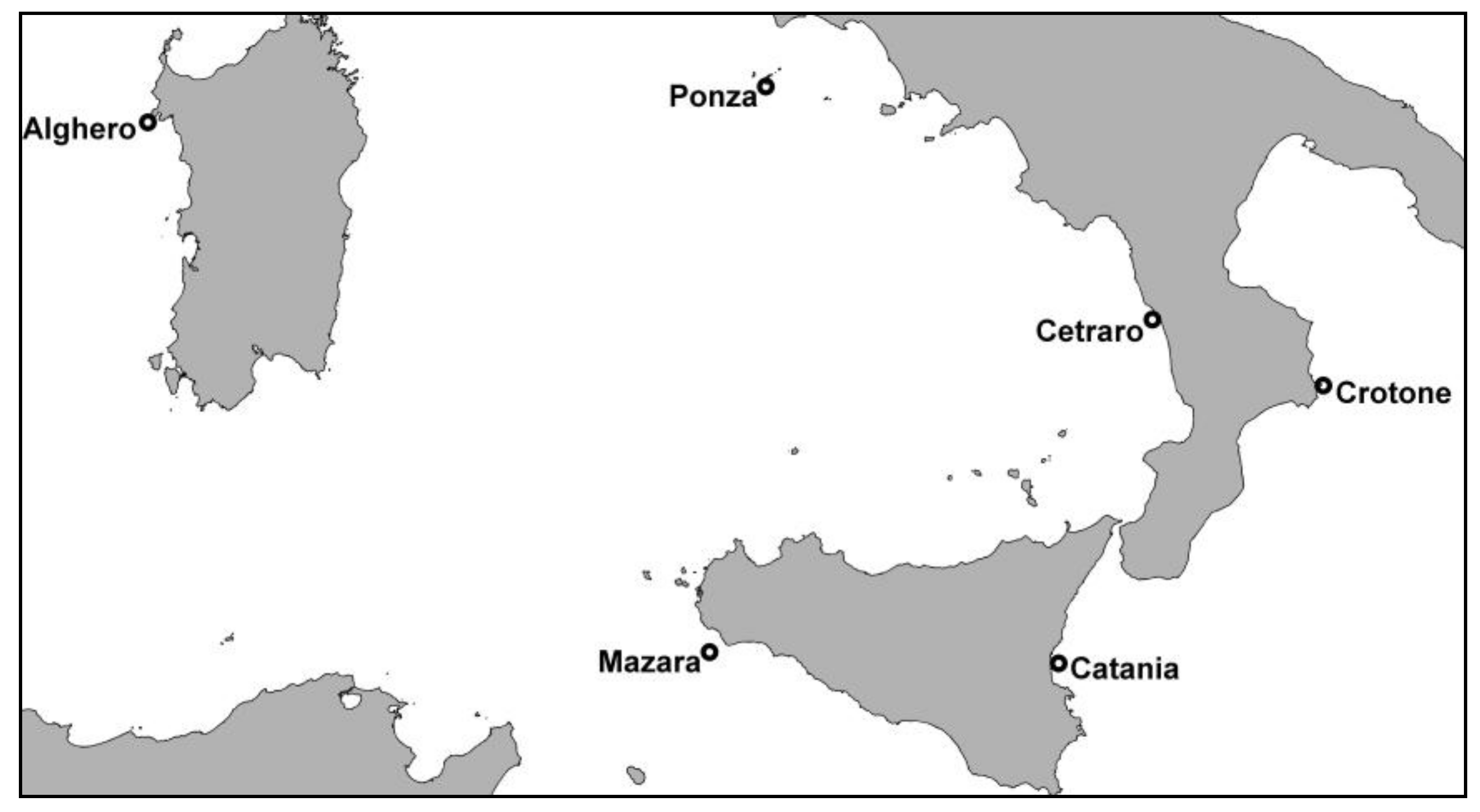 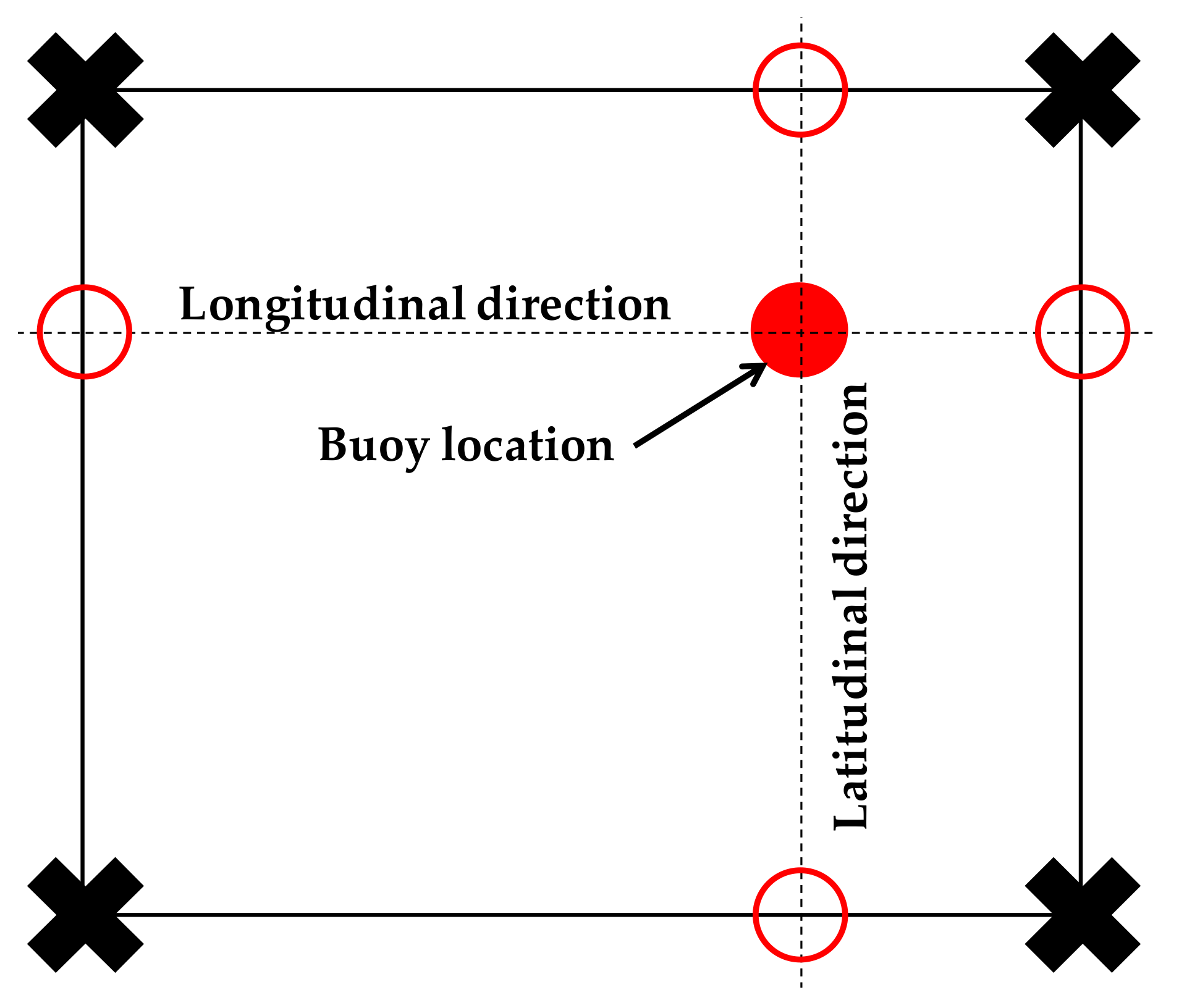 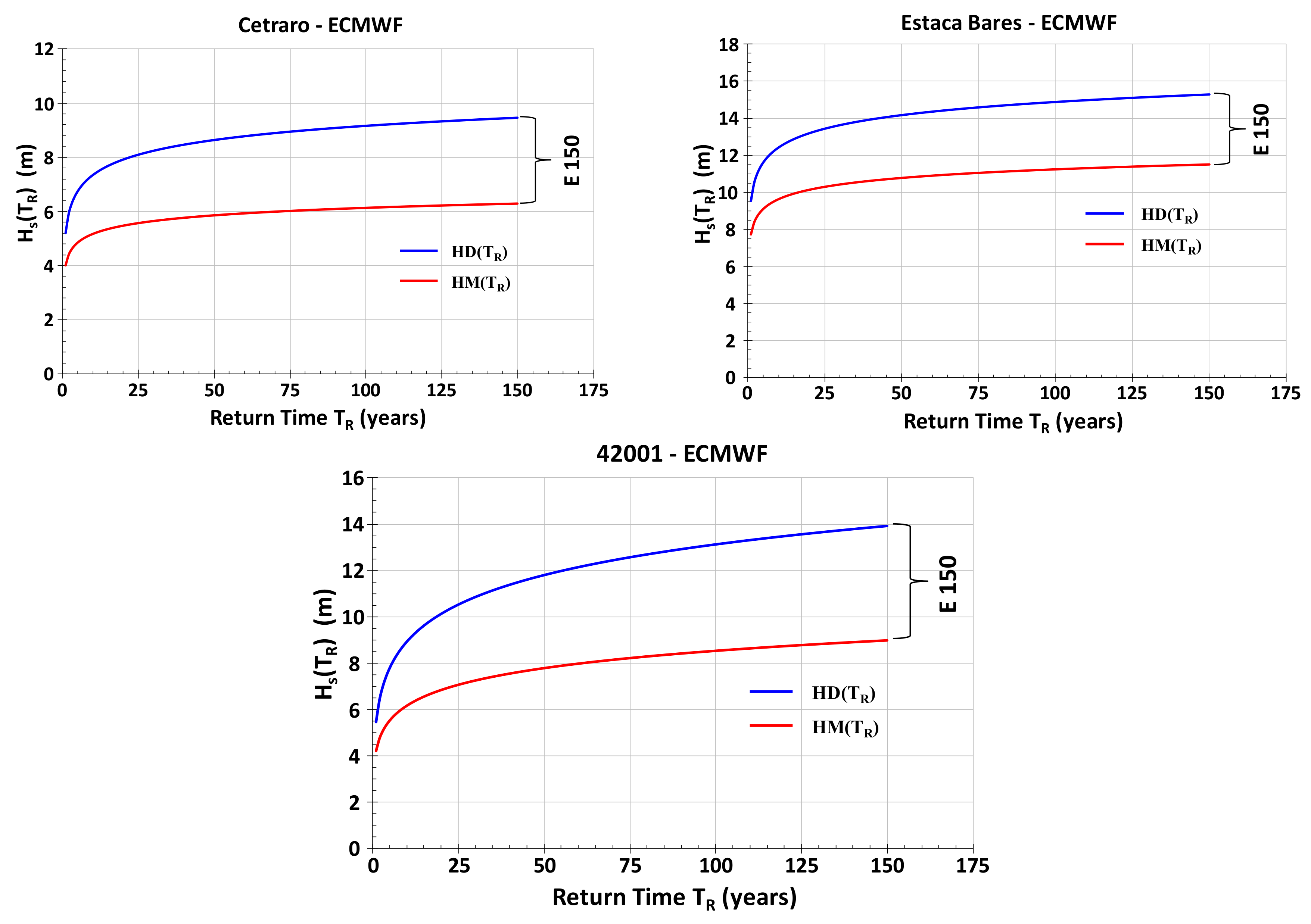