Public Participation in Science: The Future and Value of Citizen Science in the Drinking Water Research
Next Article in Special Issue

A Comparative Analysis of Exceptional Flood Events in the Context of Heavy Rains in the Summer of 2010: Siret Basin (NE Romania) Case Study

Diverse drought indices have been developed and used across the globe to assess and monitor droughts. Among them, the Standardized Precipitation Index (SPI) and Reconnaissance Drought Index (RDI) are drought indices that have been recently developed and are being used in the world’s leading countries. This study took place in Korea’s major observatories for drought prediction until 2100, using the Representative Concentration Pathway (RCP) 8.5 scenario. On the basis of the drought index measured by SPI, future climates were forecast to be humid, as the index would rise over time. In contrast, the RDI, which takes evapotranspiration into account, anticipated dry climates, with the drought index gradually falling over time. From the analysis of the drought index through the RCP 8.5 scenario, extreme drought intensity will be more likely to occur due to rising temperatures. To obtain the diversity of drought prediction, the evapotranspiration was deemed necessary for calculating meteorological droughts.
Keywords: drought index; RDI; SPI; RCP 8.5 scenario; climate change drought index; RDI; SPI; RCP 8.5 scenario; climate change

The SPI is calculated through the following steps: preparation of times series of precipitation accumulations; estimation of parameters using Pearson Type-III (PT-III) distribution, as suggested by Guttman [14]; calculation of cumulative probability; and calculation of drought index applied to standard normal distribution. The drought severity obtained from the calculation of SPI and RDI can be categorized as shown in the Table 1 [11].
The definition of drought thus far has included a beginning date, ending date, and current drought intensity. Duration of drought can be either a current duration measured from the beginning, or the duration of a historic drought event from beginning to end. Peak intensity can easily be determined from the SPI. A measure of the accumulated magnitude of the drought can be included. Drought Magnitude (DM) is defined by Equation (1) [11]. where j starts with the first month of a drought and continues to increase until the end of the drought (x) for any of the i times scales.
The DM has units of months and would be numerically equivalent to drought if each month of the drought has SPI = 1.0. In fact, many droughts will have a DM very similar to the duration in months, since most of the SPI values are between 0 and −2.0 [11].

The Reconnaissance Drought Index (RDI) can be characterized as a general meteorological index for drought assessment. The RDI can be expressed in three forms: the initial value , the normalized RDI ( and the standardized RDI () [28,29].
The initial value () is presented in an aggregated form using a monthly time step and may be calculated on monthly, seasonal (3-months, 6-months, etc.) or annual basis. The , for the year and a time basis (months) is calculated as Equation (2). where and are the precipitation and the potential evapotranspiration of month of year and is the total number of years of the available data.
The initial formulation of RDIst used the assumption that values follow a lognormal distribution and RDIst is calculated as Equation (3) [28,29]. in which is the , is its arithmetic mean and is its standard deviation [28,29].
In order to facilitate the calculation process of RDI, the software DrinC–Drought Indices Calculator was used in the study. This model was developed at the Laboratory of Reclamation Works & Water Resources Management of the National Technical University of Athens [1,29].

3.1. Time Series Data of Precipitation and Temperation in Major Observatories

3.2. Previous Research of Precipitation and Temperature Using GCM during 1976–2010

GHG (Greenhouse Gas) emission scenarios should be selected to forecast changes in hydrological conditions caused by climate change. Climate data such as temperature and precipitation will be used to forecast climate models based on selected scenarios. However, there are various uncertainties in this forecasting process [36].
Verification of hydrological data produced through GCM is therefore required. In order to verify the reliability of precipitation data, Park et al. compared the observation data with the GCM simulated monthly data during the baseline period (1976–2010) in some major observatories in Korea [37].
Comparisons of precipitation between observations and GCM simulations over the baseline period demonstrated significant differences from June to August. It is thought that such differences occur because factors that cause anomalies, such as summer, have not been adequately factored into climate change scenarios. However, observations and simulated values are relatively well matched in winter and spring, when droughts principally occur, compared to summer. Therefore, the meteorological data produced by GCM is more advantageous for use in drought than flood analysis [37].

4. Calculation and Analysis of SPI and RDI

The study conducted a future drought analysis based on the RCP 8.5 scenario by using SPI and RDI for periods of three, six, and twelve months. In order to figure out the SPI and RDI, the DrinC model was used, with the place values of the 73 observatories consisting of precipitation, temperature and latitude inputted.

4.1. Change in Time Series of SPI and RDI

Figure 4 indicates the result of average SPI from the 73 observatories that used average monthly precipitation value and latitude coordinates. Analyzing the linear regression curves showed that SPI value increases gradually at all simulated durations. This means that the climate of the future is more likely to be wet than are the current conditions. Droughts can occur regionally; regional analysis is required, as discussed in Section 4.2.
The analysis of drought through the SPI does not take evapotranspiration into account, while the analysis via the RDI does. The result of analyzing the drought index by the RDI can be seen in Figure 5.
According to analysis of the average drought index from the 73 observatories during the periods of three, six and twelve months by the RDI, it was forecast that the drought index of the twelve-month unit would gradually decrease over time. The drought index dropped when the period of analysis increased and the year became closer to 2100, which showed a contradictory result compared to the SPI, which considers only the precipitation and regional location. This also implies that the evapotranspiration caused by the rise of temperature has a great influence on the drought possibility. The results from Figure 4 and Figure 5 were the average result of the whole country, showing the inconsistent tendency of Korea’s droughts. In Section 4.2, the study conducted a drought analysis at each observatory, looking into the details of vulnerable regions.

4.2. Analysis of Drought by SPI and RDI at Each Observatory

In this section, the study shows the result of drought analysis based on the SPI and RDI in 73 observatories in Korea. By calculating the number of extreme dry occurrences between 2011 and 2100, each observatory’s drought impact was evaluated. The period from 2011 to 2100 was divided by 30-year units and changes of index value were used to predict the number of droughts possible. The distribution map of the drought index by period and region is also presented for regional drought analysis.

4.2.1. Occurrence of Extreme Drought at Each Observatory

4.2.2. Analysis of Extreme Drought for Each Season

Based on the results of the SPI and RDI at each observatory in Section 4.2.2, a distribution of domestic drought index was made. Figure 10 shows the 30-year drought index distribution, which has the advantage of being able to identify the drought index according to geographical location.
Figure 10a–c shows the SPI index divided into 2011–2040, 2041–2070 and 2071–2100, and Figure 10d–f shows the distributions of the RDI indices divided by the same period.
Between Figure 10a,d, Figure 10b,e, Figure 10c,f, the same tendency of distribution is shown, although the indices are different. In the case of 2011–2040, the SPI was found to be dry in Seoul, Gyeonggi-do and Gangwon province, which are all located in the northern part of South Korea, whereas the RDI is mostly wet in most areas.
Except for certain observations, the trends of SPI and RDI for 2041–2070 were similar, and the range of the drought index was also similar. A dry tendency was observed in northeast and southwest coastal areas. In the case of 2071–2100, the SPI showed a tendency to being wet in all regions with an index value of 0 or more. On the other hand, the RDI tended to be dry in all areas except the south coastal.
In a previous study of drought index estimation taking into account precipitation and evapotranspiration that used previous observation data collated during the past 35 years in Korea, Kim and Lee suggested a drought distribution map for Korea [38].
According to their research, drought frequency in the southern region was high in 1970, while the frequency of drought in Gangwon province in the north-east increased in 2000. They suggested that the frequency of droughts indicates a shift from southwest to northeast. Figure 10a,d shows the similarity of the drought distribution maps of Kim and Lee [38]. However, it is difficult to compare the actual number of drought events in their study, such that further studies are needed to make comparisons between past observation data and future climate change scenario.

This study drew the following conclusion from the analysis of meteorological drought based on the RCP 8.5 scenario conducted at nationwide observatories by applying the SPI and RDI.
According to the drought indices estimated at the observatories of Korea from 2011 to 2100, the SPI predicted the trend graph of drought index would be maintained over time. However, the RDI, with evapotranspiration taken into account, predicted the trend graph drought index would gradually decrease over time, meaning it was closer to dry conditions than the wet of the drought index.
The RDI showed the biggest drop at the twelve-month period. The result of comparing the drought indices from 73 observatories revealed that Daegu would be exposed to the risk of drought, as the region would have the highest drought intensity with the most number of extreme dry occurrences.
As a result of comparing the drought index distribution maps, SPI and RDI showed a similar tendency according to area location, but the difference in drought index values due to evapotranspiration increased with the time to 2100. In particular, the average RDI showed less than 0 in 2071–2100, and the probability of extreme drought after 2070 increased. It is predicted that the probability of drought will increase after 2070.
It is considered that the drought intensity will be extreme due to the rise of temperature and the probability that extreme intensity will occur is high according to the analysis of RDI based on the RCP 8.5 scenario. Furthermore, the amount of evapotranspiration is deemed essential for studying the meteorological drought to obtain the diversity of drought prediction.
The RCP 8.5 scenario is an extreme condition in which greenhouse gas mitigation policies are not implemented and greenhouse gases are emitted according to current trends. There is a limitation in that the evapotranspiration can be overestimated under conditions of high temperature increase effect compared to other RCP scenarios. Therefore, a drought index using RDI needs to be analyzed in consideration of this uncertainty. 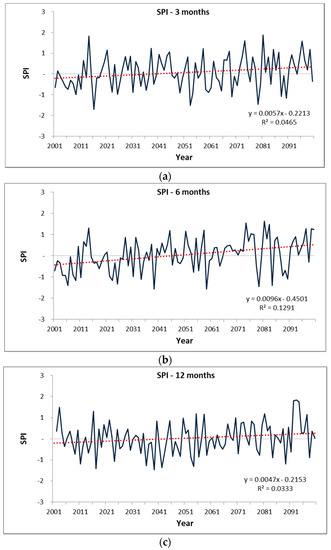 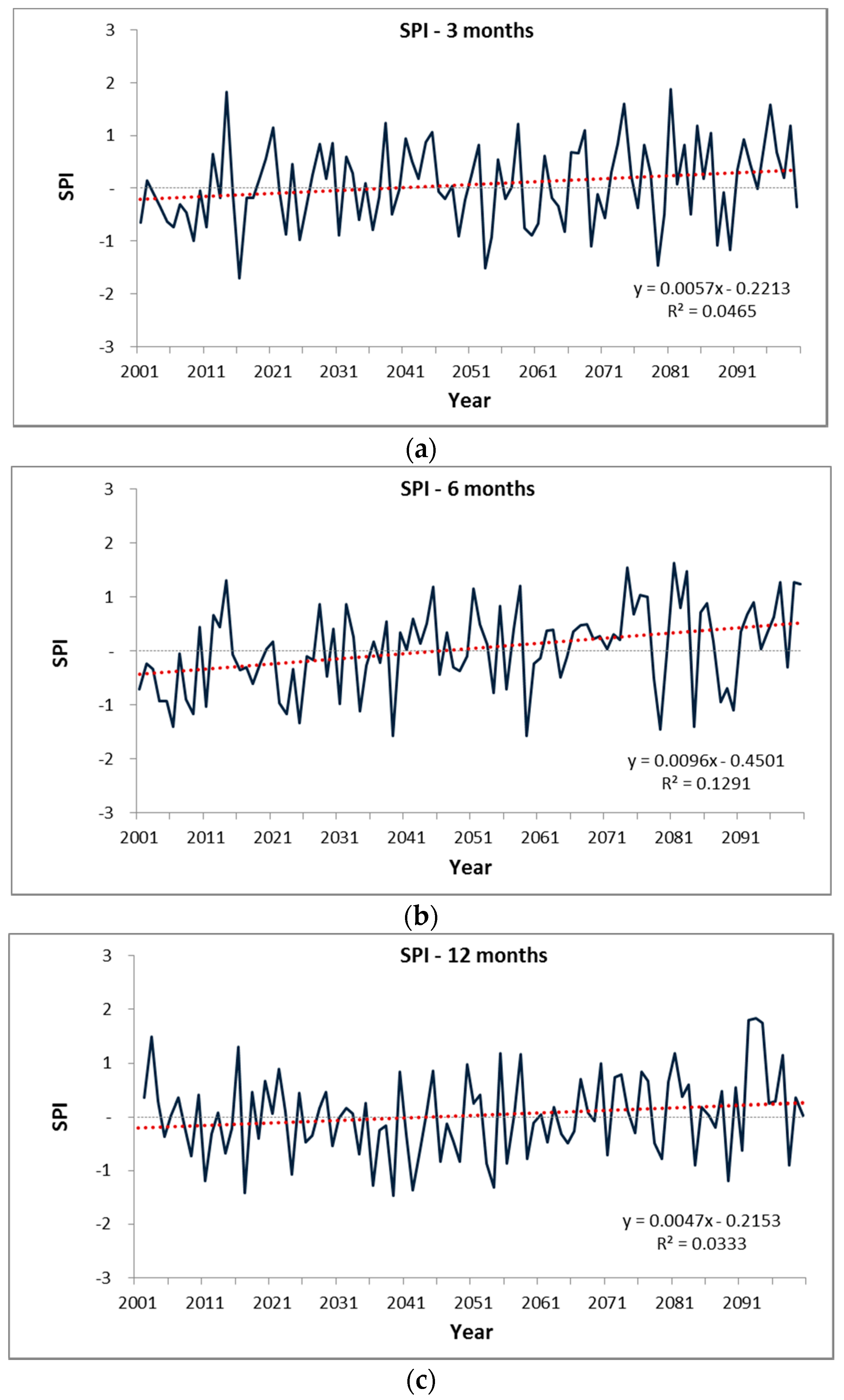 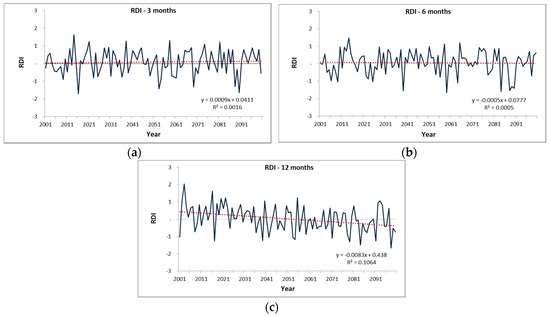