Carbamazepine as a Possible Anthropogenic Marker in Water: Occurrences, Toxicological Effects, Regulations and Removal by Wastewater Treatment Technologies
Next Article in Special Issue

Cross-Analysis of Land and Runoff Variations in Response to Urbanization on Basin, Watershed, and City Scales with/without Green Infrastructures

Evaluating land and runoff variations caused by urbanization is crucial to ensure the safety of people living in highly developed areas. Based on spatial scales, runoff analysis involves different methods associated with the interpretation of land cover and land use, the application of hydrological models, and the consideration of flood mitigation measures. Most studies have focused on analyzing the phenomenon on a certain scale by using a single data source and a specific model without discussing mutual influences. In this study, the runoff changes caused by urbanization are assessed and cross-analyzed on three sizes of study areas in the Zhuoshui River Basin in Taiwan, including basin (large), watershed (medium), and city (small) scales. The results demonstrate that, on the basin scale, land-cover changes interpreted from satellite images are very helpful for identifying the watersheds with urbanization hotspots that might have larger runoff outputs. However, on the watershed scale, the resolution of the land-cover data is too low, and land-cover data should be replaced by investigated land-use data for sophisticated hydrological modeling. The mixed usage of land-cover and land-use data is not recommended because large discrepancies occur when determining hydrological parameters for runoff simulation. According to present and future land-use scenarios, the influence of urbanization on runoff is simulated by HEC-1 and SWMM on watershed and city scales, respectively. The results of both models are in agreement and show that runoff peaks will obviously increase as a result of urbanization from 2008 to 2030. For low return periods, the increase in runoff as a result of urbanization is more significant and the city’s contribution to runoff is much larger than its area. Through statistical regression, the watershed runoff simulated by HEC-1 can be perfectly predicted by the city runoff simulated by SWMM in combination with other land/rainfall parameters. On the city scale, the installation of LID satisfactorily reduces the runoff peaks to pre-urbanization levels for low return periods, but the effects of LID are not as positive and are debatable for higher return periods. These findings can be used to realize the applicability and limitations of different approaches for analyzing and mitigating urbanization-induced runoff in the process of constructing a sponge city. View Full-Text
Keywords: urbanization; land-cover; land-use; surface runoff; low impact development; sponge city urbanization; land-cover; land-use; surface runoff; low impact development; sponge city
►▼ Show Figures 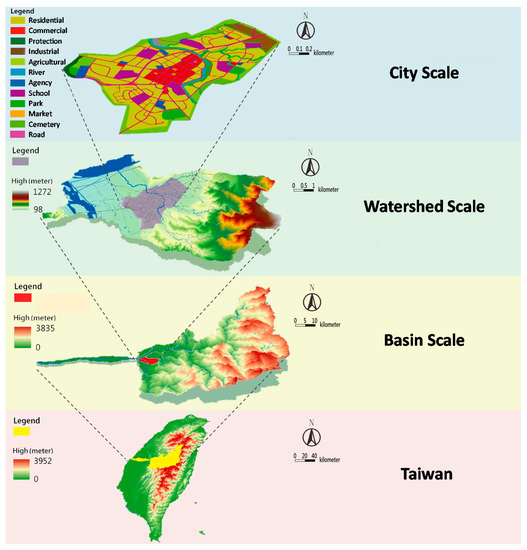