Flow Regime and Nutrient-Loading Trends from the Largest South European Watersheds: Implications for the Productivity of Mediterranean and Black Sea’s Coastal Areas
Next Article in Special Issue

Flood prevention in mixed urban–rural environments has become a greater concern due to climate change. It is a complex task requiring both efficient management of resources and the involvement of multiple stakeholders from diverse backgrounds. As Serious Games (games used for purposes other than mere entertainment) have emerged as an effective means of engaging stakeholders, this work proposes a new Serious Game applied to flood mitigation in the village of Millbrook in the UK. Results show that the game has both an informative and a transformative effect (statistical significance levels from 0.01 to 0.05), improving participants’ understanding of the problem, and helping them to find a new and improved approach to flood risk management in Millbrook, with the potential to improve resilience significantly. Furthermore, the game successfully transformed participants into “citizen scientists” in the purest sense of the term—it led them to use inductive reasoning from data produced by the game to correctly confirm or reject hypotheses and resulted in more than 70% of the participants revising their initial assumptions. Interestingly, the game instigated the formation of new local partnerships and helped to prioritize the discussion of natural flood management measures in Millbrook Parish Council meetings. View Full-Text
Keywords: serious gaming; flood; urban; rural; infrastructure; decision making serious gaming; flood; urban; rural; infrastructure; decision making
►▼ Show Figures 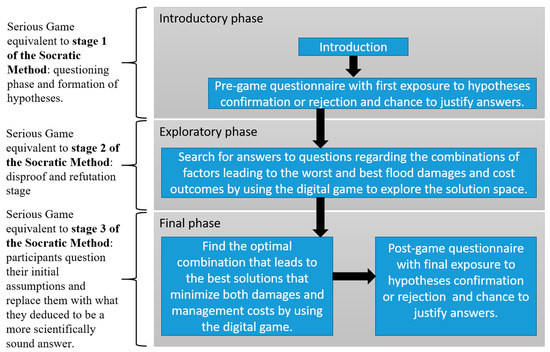