Extreme Drought Events over the Amazon Basin: The Perspective from the Reconstruction of South American Hydroclimate

The Amazon basin has experienced severe drought events for centuries, mainly associated with climate variability connected to tropical North Atlantic and Pacific sea surface temperature anomalous warming. Recently, these events are becoming more frequent, more intense and widespread. Because of the Amazon droughts environmental and socioeconomic impacts, there is an increased demand for understanding the characteristics of such extreme events in the region. In that regard, regional models instead of the general circulation models provide a promising strategy to generate more detailed climate information of extreme events, seeking better representation of physical processes. Due to uneven spatial distribution and gaps found in station data in tropical South America, and the need of more refined climate assessment in those regions, satellite-enhanced regional downscaling for applied studies (SRDAS) is used in the reconstruction of South American hydroclimate, with hourly to monthly outputs from January 1998. Accordingly, this research focuses on the analyses of recent extreme drought events in the years of 2005 and 2010 in the Amazon Basin, using the SRDAS monthly means of near-surface temperature and relative humidity, precipitation and vertically integrated soil moisture fields. Results from this analysis corroborate spatial and temporal patterns found in previous studies on extreme drought events in the region, displaying the distinctive features of the 2005 and 2010 drought events. View Full-Text
Keywords: extreme droughts; Amazon; downscaling; precipitation assimilation; hydroclimatology extreme droughts; Amazon; downscaling; precipitation assimilation; hydroclimatology
►▼ Show Figures 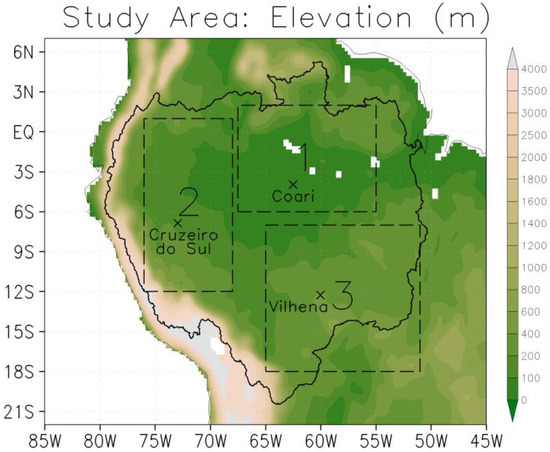