The variability of rainfall and climate, combined with land use and land cover changes, and variation in geology and soils makes it a difficult task to accurately describe the key hydrological processes in a catchment. With the aim to better understand the key hydrological processes and runoff generation mechanisms in the semi-arid meso-scale Kaap catchment in South Africa, a hydrological model was developed using the open source STREAM model. Dominant runoff processes were mapped using a simplified Height Above the Nearest Drainage approach combined with geology. The Prediction in Ungauged Basins (PUB) framework of runoff signatures was used to analyse the model results. Results show that in the headwater sub-catchments of Noordkaap and Suidkaap, plateaus dominate, associated with slow flow processes. Therefore, these catchments have high baseflow components and are likely the main recharge zone for regional groundwater in the Kaap. In the Queens sub-catchment, hillslopes associated with intermediate and fast flow processes dominate. However, this catchment still has a strong baseflow component, but it seems to be more impacted by evaporation depletion, due to different soils and geology, especially in drier years. At the Kaap outlet, the model indicates that hillslopes are important, with intermediate and fast flow processes dominating and most runoff being generated through direct runoff and shallow groundwater components, particularly in wetter months and years. There is a high impact of water abstractions and evaporation during the dry season, affecting low flows in the catchment. Results also indicate that the root zone storage and the parameters of effective rainfall separation (between unsaturated and saturated zone), quickflow coefficient and capillary rise, were very sensitive in the model. The inclusion of capillary rise (feedback from the saturated to unsaturated zone) greatly improved the simulation results. View Full-Text
Keywords: hydrological modelling; runoff processes; STREAM model; Kaap River; semi-arid catchment; Southern Africa hydrological modelling; runoff processes; STREAM model; Kaap River; semi-arid catchment; Southern Africa
►▼ Show Figures 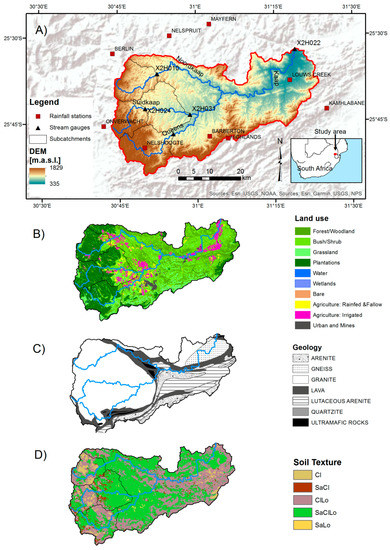