Parametric studies on the optimization of baffles on vibration suppression of partially filled tanks coupled by structure have been widely conducted in literature. However, few studies focus on the effect of the position of the baffles on fluid flow stratification and dampening the motion. In the present study, a numerical investigation, an engineering analysis, and optimal design study were performed to determine the effect of external flow on circular obstacle baffles performance on suppressing the vibrations of coupled structure in a closed basin. The single degree of freedom model (mass–spring–damper) is used to model the structure that holds the tank. The coupled system is released from an initial displacement without a velocity. The governing mass, turbulent Navier–Stokes momentum, volume of fluid, and one degree of freedom structure equations are solved by the Pressure-Implicit with Splitting of Operators algorithm in fluids and Newmark method in structure. Based on a detailed study of transient structure motion coupled with sloshing dynamics, the optimal baffle location was achieved. Optimal position of the baffle and its width are systematically obtained with reference to the quiescent free surface. View Full-Text
Keywords: baffles; fluid–solid interaction; sloshing dynamics; vibration; control baffles; fluid–solid interaction; sloshing dynamics; vibration; control
►▼ Show Figures 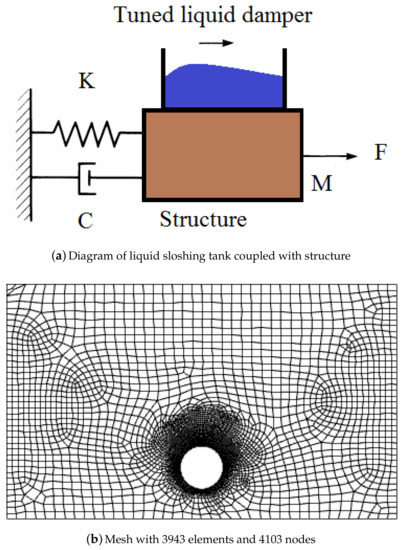