The ability of the WRF-ARW (Weather Research and Forecasting-Advanced Research WRF) model to forecast extreme rainfall in the Central Andes of Peru is evaluated in this study, using observations from stations located in the Mantaro basin and GOES (Geostationary Operational Environmental Satellite) images. The evaluation analyzes the synoptic conditions averaged over 40 extreme event cases, and considers model simulations organized in 4 nested domains. We first establish that atypical events in the region are those with more than 27 mm of rainfall per day when averaging over all the stations. More than 50% of the selected cases occurred during January, February, and April, with the most extreme occurring during February. The average synoptic conditions show negative geopotential anomalies and positive humidity anomalies in 700 and 500 hPa. At 200 hPa, the subtropical upper ridge or “Bolivian high” was present, with its northern divergent flank over the Mantaro basin. Simulation results show that the Weather Research and Forecasting (WRF) model underestimates rainfall totals in approximately 50–60% of cases, mainly in the south of the basin and in the extreme west along the mountain range. The analysis of two case studies shows that the underestimation by the model is probably due to three reasons: inability to generate convection in the upstream Amazon during early morning hours, apparently related to processes of larger scales; limitations on describing mesoscale processes that lead to vertical movements capable of producing extreme rainfall; and limitations on the microphysics scheme to generate heavy rainfall. View Full-Text
Keywords: central Andes; extreme precipitation events; synoptic conditions; model configuration; model verification; mesoscale processes; Mantaro basin; WRF central Andes; extreme precipitation events; synoptic conditions; model configuration; model verification; mesoscale processes; Mantaro basin; WRF
►▼ Show Figures 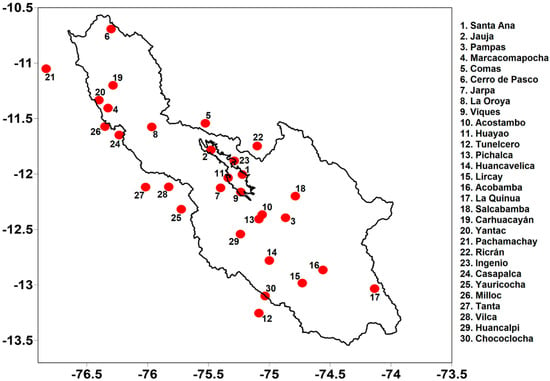