The Indian summer monsoon (ISM) is a prominent feature of the summer circulation in the Northern Hemisphere (NH) and has been found to modulate the weather and climate conditions in many remote regions. This study investigates the most recurrent patterns of summertime midlatitude circulation, over the eastern Mediterranean (EM) and also globally, that are most associated with the ISM. Monthly data of 44 summers from the ERA40 dataset are used and two multidimensional statistical methods, the Principal Component Analysis (PCA) and Canonical Correlation Analysis (CCA), are implemented. The ISM is found to be related to subsidence anomalies in the middle and more extendedly in the upper troposphere over the central and eastern Mediterranean and with an Etesian-like pattern regarding the field of the lower troposphere winds. An equatorial Rossby wave pattern, extending westward from an ISM heat source up to EM and N. Africa, was identified to be associated with the variability of ISM. The observed relationship between the ISM and the EM circulation features can be attributed to this equatorial Rossby wave response to the monsoon forcing. CCA implementation revealed the interconnection of the aforementioned PCA results with an ISM action center over the northern Arabian Sea and the monsoon trough region.
Keywords: Indian summer monsoon; eastern Mediterranean; Rossby waves; Etesians; subsidence; PCA; CCA Indian summer monsoon; eastern Mediterranean; Rossby waves; Etesians; subsidence; PCA; CCA

Monthly global reanalysis data were used from the ERA-40 dataset of the European Center for Medium-Range Weather Forecast (ECMWF; [25]). The variables used here include geopotential height at 200, 500, 700, 850 and 925 hPa, zonal and meridional winds at 200 and 850 hPa, and vertical velocity at 200 and 500 hPa. In order to describe the tropical convection activity of the ISM, the monthly top thermal radiation (TTR) data were derived from the ERA-40 dataset, which correspond to the net thermal (longwave) radiation at the top of the atmosphere.
All data have a 2.5× 2.5 horizontal resolution, covering boreal summers from 1958 to 2001. In this study, summer refers to the peak ISM season, namely June, July, August, September (JJAS).
The All India Rainfall Index (AIRI) by Parthasarathy et al. [26], Parthasarathy [27] was used to represent the convective activity over India and its variability. AIRI is defined as the area-weighted average of rainfall observed at well-distributed rain-gauge stations all over India and is the most widely used measure of the intensity of the planetary scale monsoon over India.
First, PCA was applied to the monthly time series of circulation data on global and regional domains. The monthly anomalies of the parameters studied were calculated, using the long-term period average at every grid point for the total period. The number of principal components (PCs) retained for each dataset was decided based on a 70% threshold of the total variance explained and on the physical interpretation of the results. The varimax method was used for the PCs’ rotation [28] which maximizes the variance of the squared correlation coefficients between each rotated principal component and each of the original time series (Rotated Principal Component Analysis), thus increasing the discrimination among the loadings and making them easier to interpret. Also, the rotated PCs are less dependent on the domain of the analysis and their spatial patterns more closely resemble observed anomaly fields [28]. Varimax rotation was applied in all cases of PCA performance.
To further assess and quantify the influence of the ISM on the midlatitude circulation, the CCA was applied to the gridded circulation data of EM and Northern Hemisphere (NH) domains on the one hand and to the corresponding TTR data for the ISM region on the other. CCA allows the investigation of the linear relationship between two different fields and determines optimal pairs of concurrently spatial patterns that account for the maximum amount of variance within the two time series separately, and, at the same time, their optimally correlated time components. Prior to the application of CCA, PCA was applied on the time series of each parameter in order to reduce the number of the initial variables. The procedure is followed by many researchers in order to filter the data from noise and to avoid the quasi-degeneracy of the autocovariance matrices of the datasets.

3.1. Descending Motions over the EM Region

In order to demonstrate the robustness of the connection found earlier between the ISM and specific circulation features, a cross-validation analysis was performed for the same period with the aid of CCA. CCA was applied on the main components that were derived from the application of PCA on the considered variables discussed earlier (Z200, U200, V200, Z850, V850, 500 and 200) as well as on the TTR field over the region of India. The domains of CCA application were respectively the whole NH for Z200 and V200, 0–80 N and 60 W–150 E for U200 and Z850 fields, the Mediterranean region (25–50 N and 20 W–50 E) for V850, 500 and 200 and 0–30 N and 50–100 E for the TTR data.
CCA results confirmed the previous findings of the PCA method, which detected the spatial patterns that were highly correlated with the ISM activity. Additionally, the CCA application associated the dominant spatial patterns of interest over EM and the NH with a specific monsoon action center over the ISM region. The products of a completed CCA include (i) canonical loading patterns for ‘predictor’ and ‘predictand’ variables separately; (ii) canonical variate time series (canonical scores) for each variate separately; and (iii) eigenvalues whose square roots are the canonical correlations.
The first canonical pair, that was derived for the case of Z200 and TTR PCs, is depicted in Figure 14. For Z200, the PC depicted at Figure 9 can be identified, where the anticyclonic center over the west-central Asia and N. Africa prevails, whereas for the TTR field, the correlation coefficients between the resulting canonical variate and the TTR time series (canonical loadings) are above r = 0.8 over northwestern India and the northern Arabian Sea, at a range of latitudes between 20 and 25 N. High canonical loadings can be also found over the monsoon trough region in north-central India and the northern Bay of Bengal. The location of the monsoon action center that was identified to be correlated with the Rossby wave response that extends to the west of the monsoon region is in agreement with the findings of previous researchers [4,15]. The canonical correlation between the canonical variates of Z200 and TTR fields is r = 0.92. The spatial pattern of the correlation loadings over India resembles the phase of full development of the monsoon (established monsoon phase) or else the active periods of the monsoon, during which, positive rainfall anomalies cover the central Asia and negative rainfall anomalies appear over the SE Asia.
The rest of the variables examined were also found to be highly correlated with the active phase of the monsoon, that was identified in Figure 14b, in one of the first canonical pairs that were derived in each case. The respective canonical variates are presented in Figure 15 for upper troposphere circulation and in Figure 16 for the lower circulation variables. For simplicity, the spatial pattern of the TTR canonical variate is not re-presented, as it is almost identical in each case to that presented in Figure 14b.

In this work, the interrelationship of the main circulation patterns during boreal summer (June to September), found with the aid of PCA and the ISM variability, was investigated. The following conclusions can be drawn.
There is a statistically significant relationship between the ISM variability and the subsidence over the central and eastern Mediterranean. The subsidence center is located over the central and west-eastern Mediterranean at the middle troposphere and it is extended over EM in the upper troposphere. The ISM is also found to be related to a pure Etesians pattern, found from the application of PCA on the wind speed field of the lower troposphere (850 hPa). The extended Asian thermal low, which expands over the EM with the form of the Persian trough, is correlated with the ISM as expected, and has been identified to be associated with the persistent northerly flow over central and eastern Mediterranean. An anomalous subtropical system located over central Europe and NW Africa, which reaches the east over EM, has been also found to be associated with the northerly flow over central and eastern Mediterranean. This finding is compatible with previous studies [15,42], that attributed the control of high-frequency variability of Etesians to middle latitude dynamics; the control of their intraseasonal and interannual variability was attributed to the ISM effect.
In the upper atmospheric circulation, a teleconnection pattern is identified, which depicts a structure of an anticyclonic gyre extending over the subtropics, westward from northern India region up to the American continent, and is closely related to the equatorially trapped Rossby wave response to the convective activity of the ISM. The latitudinal displacement of the subtropical westerly jet stream over the EM and central-west Asia regions and the relative positions of the westerly jet and the tropical easterly jet in the Asia region set up the necessary favorable conditions of basic zonal flow for the development of the equatorial Rossby wave.
Furthermore, the coupled patterns that resulted from the application of the CCA on the respective circulation fields over the NH and EM and the top thermal radiation over the broader region of the ISM, suggested the northern Arabian Sea and the NW India, a region at latitudes of around 15 N–25 N, as well as the monsoon trough region, as the centers of monsoon action that are associated with the patterns revealed by the PCA analysis. The position of the monsoon action center over the northern Arabian Sea is in agreement with the findings of previous studies, which elaborated either numerical experiments [32,33] or observational evidence [15,22,23] to conclude that the ISM variability over the specific area acts as a forcing mechanism and significantly influences the extratropical circulation by inducing teleconnection patterns.
Our results confirm and elaborate upon the studies to date that have attempted to shed light on the influence of the ISM on the main circulation features of EM and on the mechanisms explaining this connection. A similar analysis should be conducted on the intraseasonal time scale, regarding the high-frequency variabilities of the Etesians and of subsidence movements over the EM and their connection to ISM activity, in order to understand the interrelation in its full dimension. 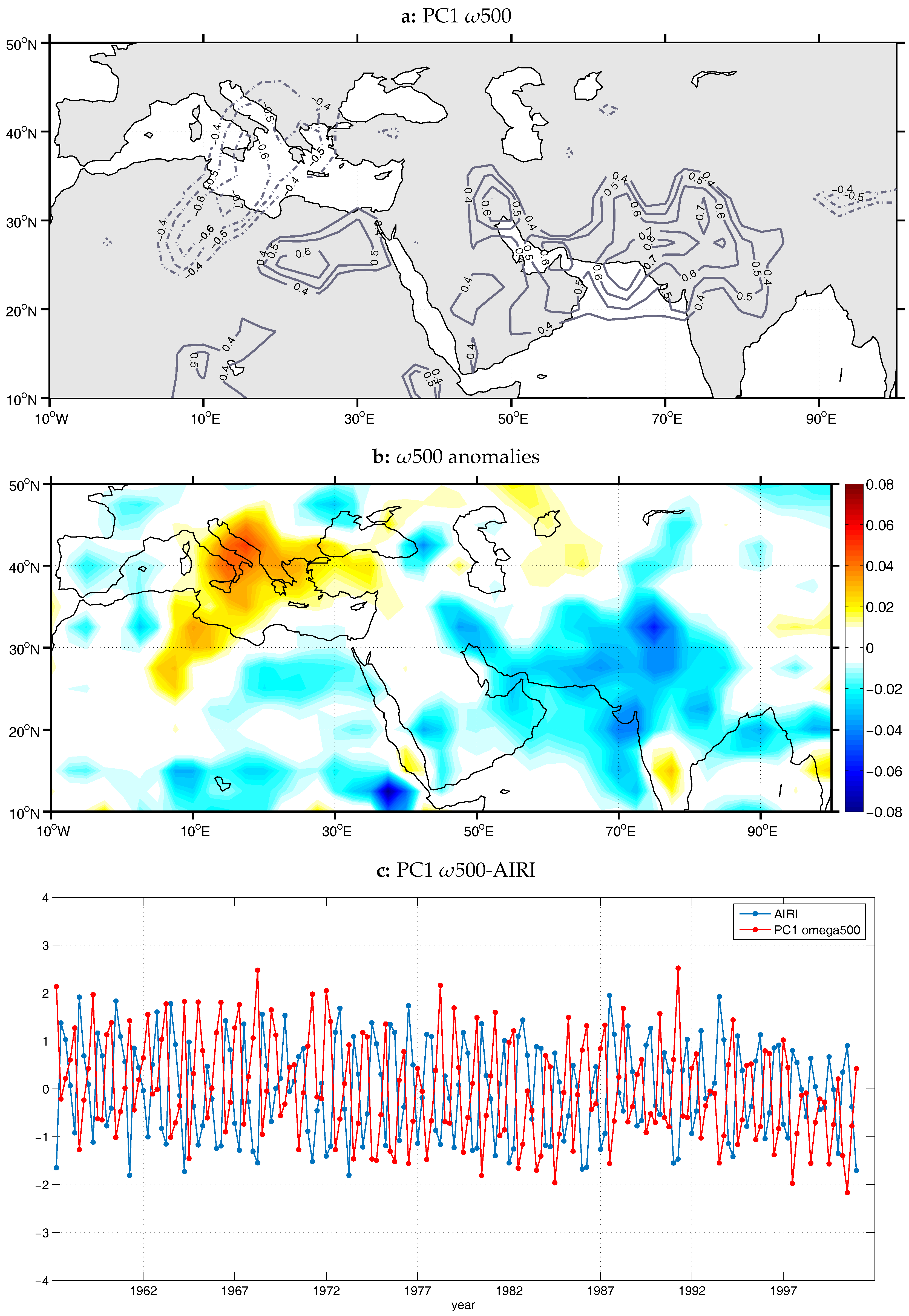 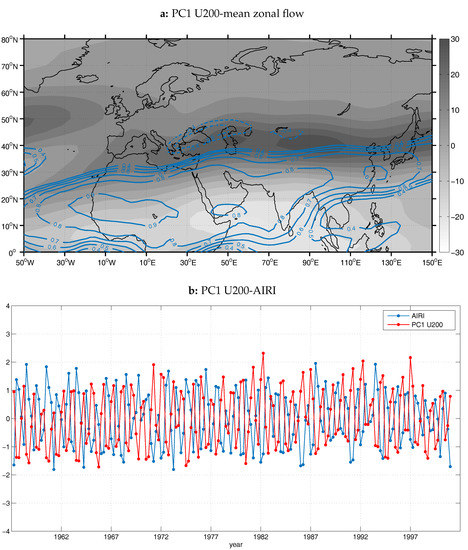 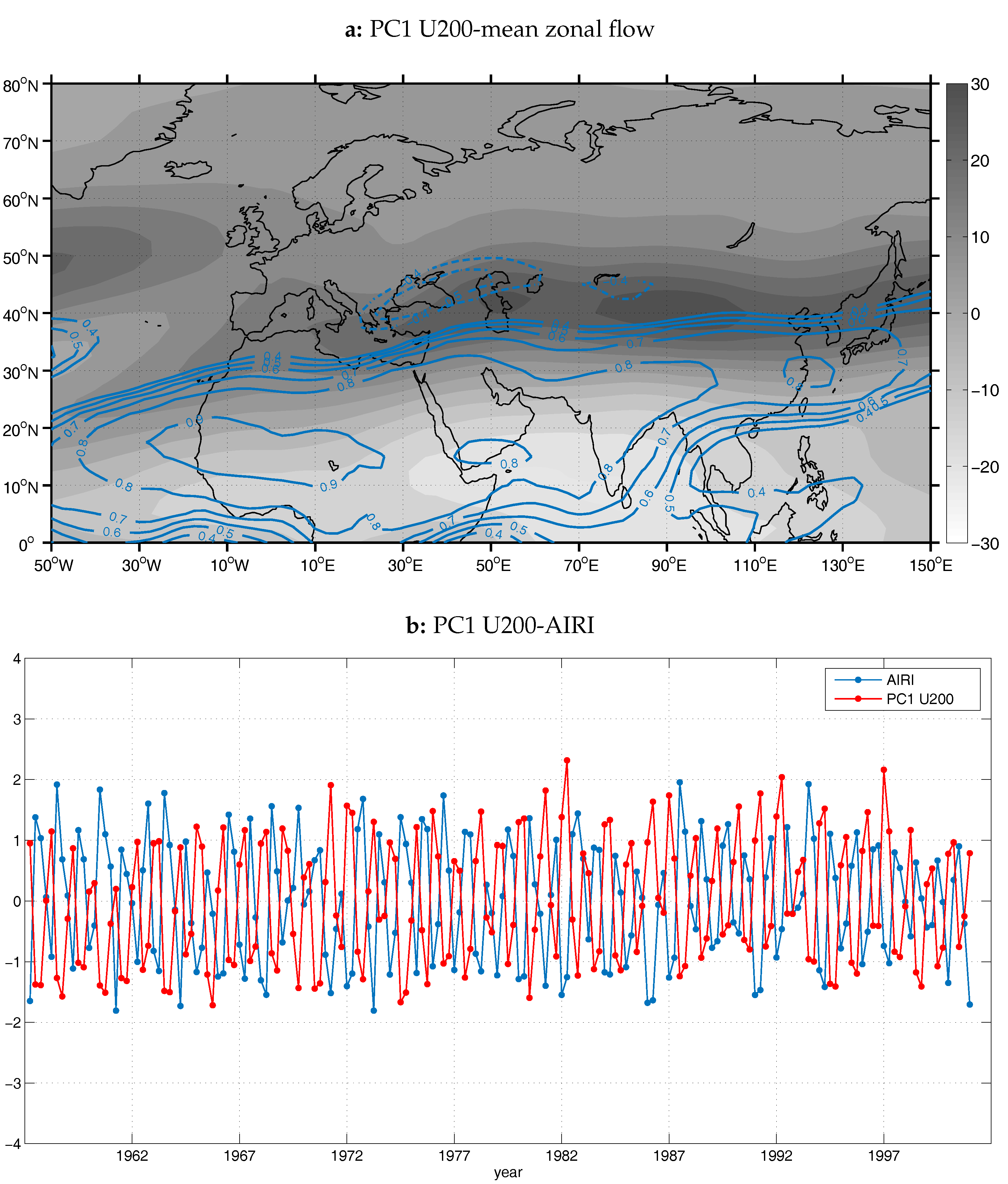 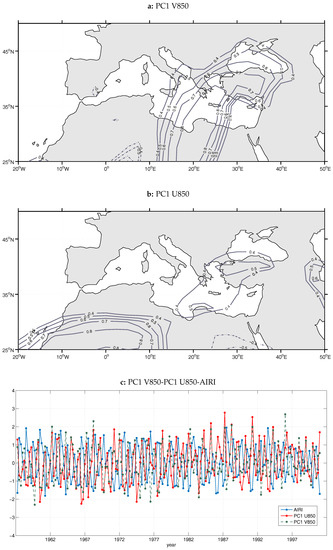 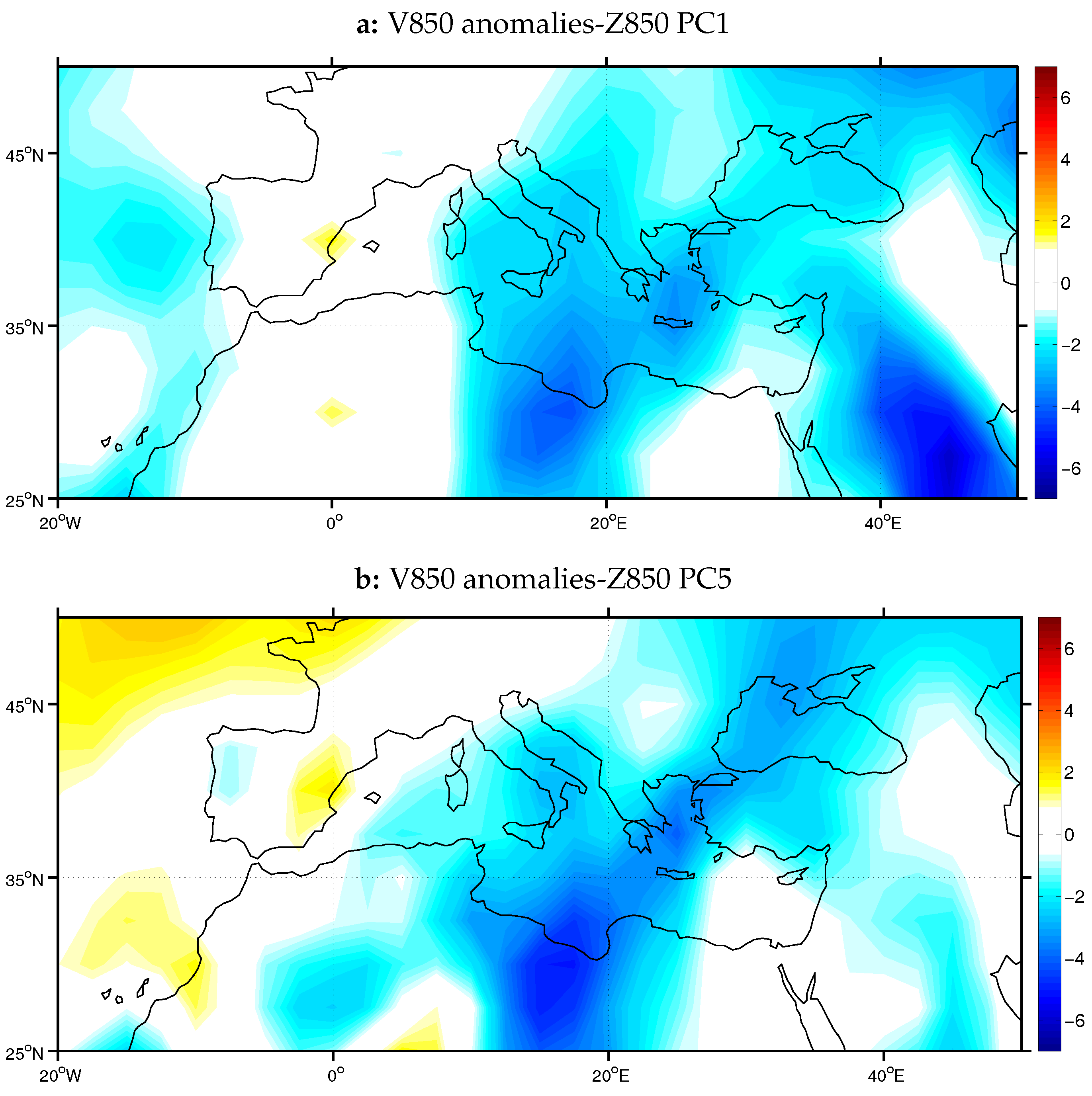 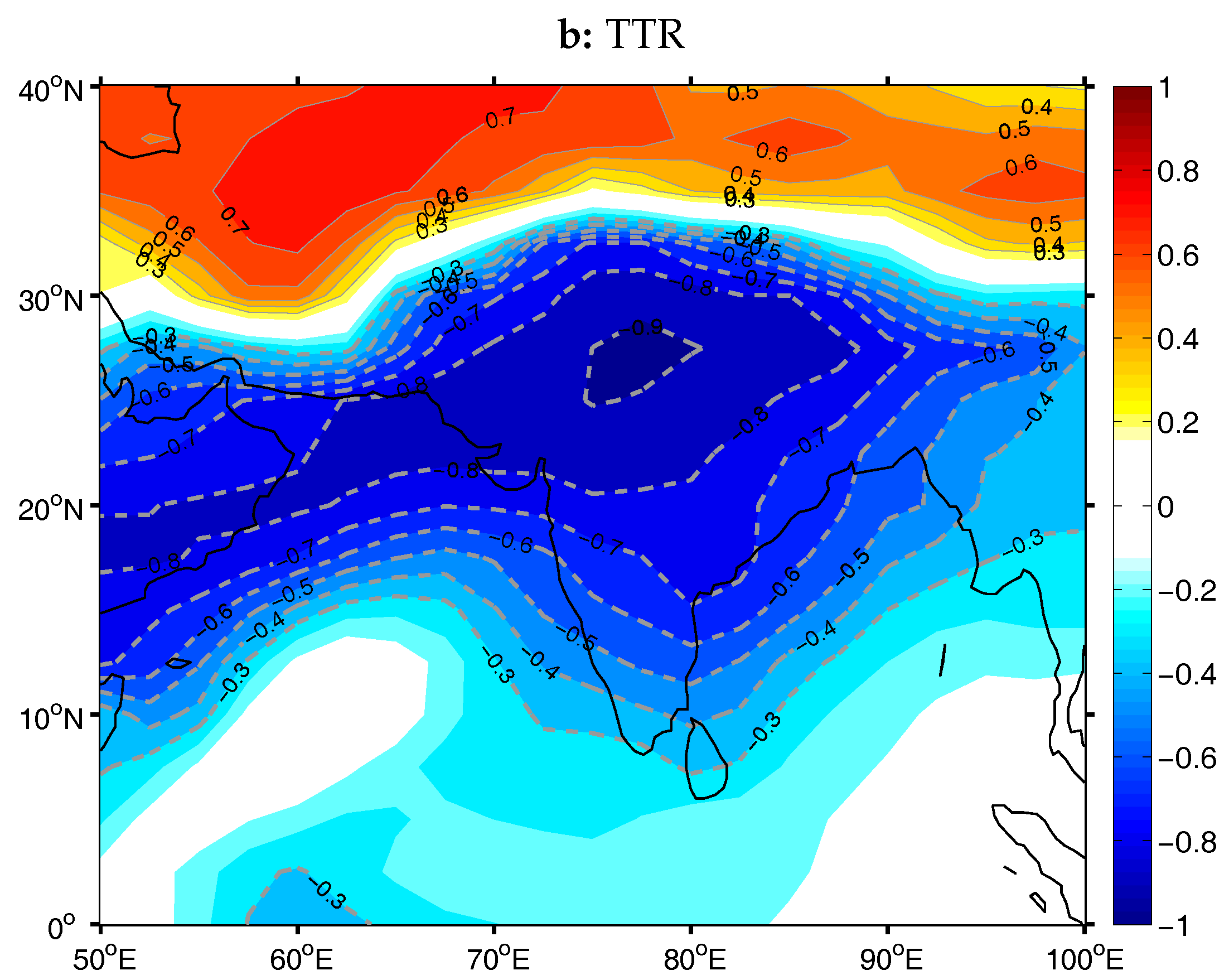 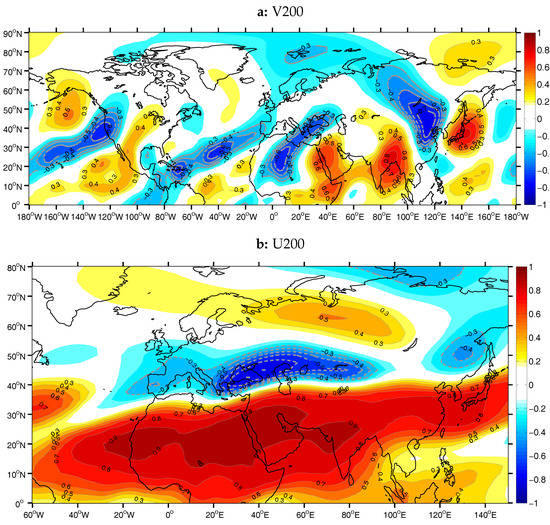 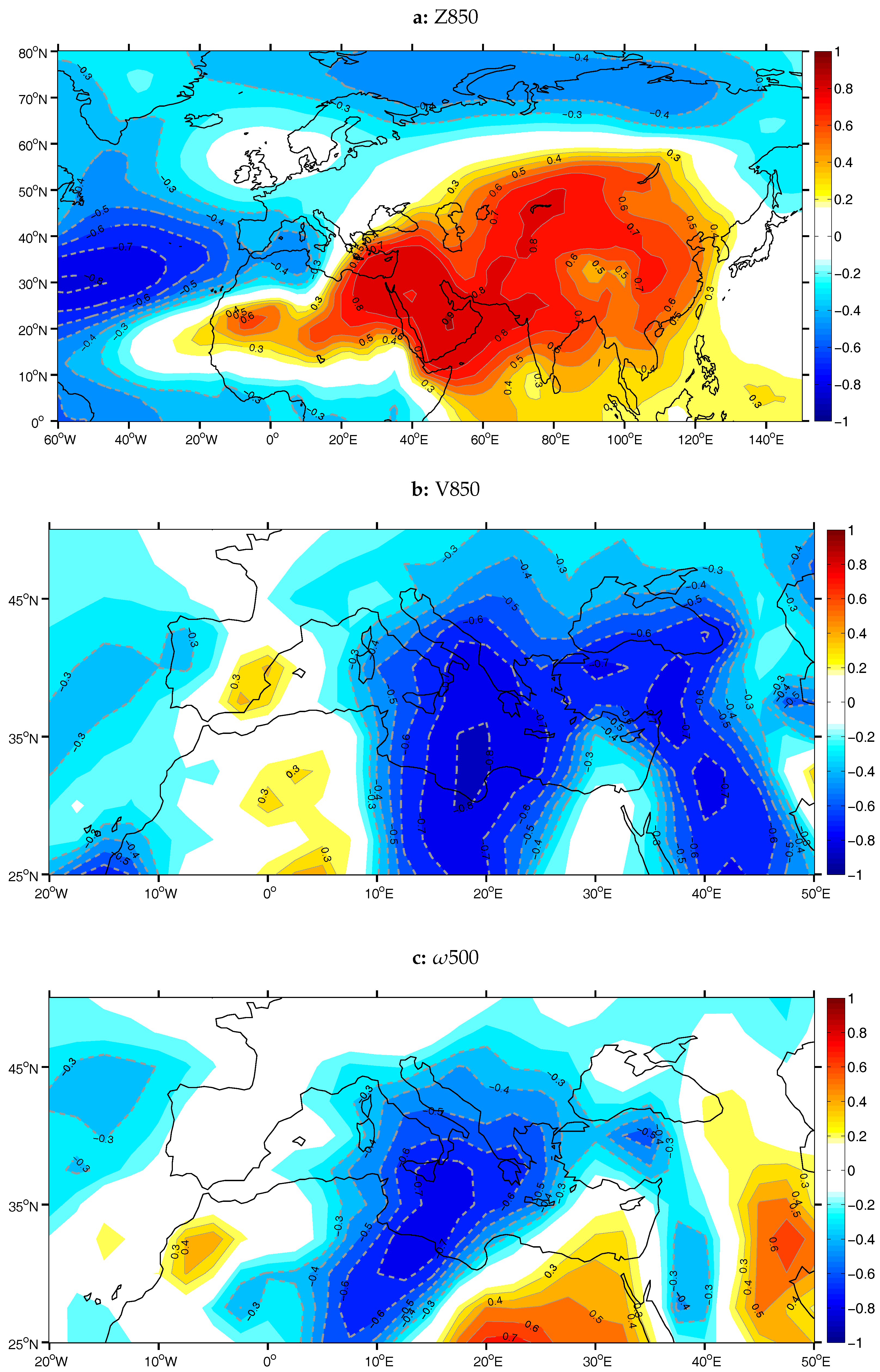