Atmospheric blocking is one of the most dramatic phenomena of large-scale circulation in the middle troposphere at mid and high latitudes [1,2]. One of the basic conditions when detecting a blocking is, according to D. F. Rex, the westerly jet separation into two branches enveloping the blocking region [3]. At present, it is also accepted that a necessary blocking component is the presence of a large-amplitude equivalent-barotropic anticyclone [4]. Depending on the pressure field configuration, there are two main types of blockings [4]: monopole and dipole. A monopole blocking (Omega-blocking, Ω) represents an intensified high pressure ridge, at whose basis, there are two atmospheric troughs on either side. A dipole blocking (Rex-blocking) resembles the numeral “8”, and comprises a blocking anticyclone and a cyclone, in the northern and in the southern parts of the blocking, respectively (in the Northern Hemisphere). During blocking events, the westerly flow and the eastward displacement of the weather systems are interrupted. The temperature and precipitation, as well as the air composition, change significantly [1,2,4,5,6]. Thereby, blockings essentially affect the weather conditions both in the blocking region and in the adjacent one. The blocking lifetime varies from several days to several weeks, and, therefore, blockings may be responsible for various extreme weather phenomena, such as long-term droughts and frosts. In the paper of Mokhov and Semenov [2], a close relation between extremely cold winters and atmospheric blocking events during the first decade of the 21st century was revealed.
Western Siberia is not a region with a high atmospheric blocking frequency. Nevertheless, even at low frequency, atmospheric blockings may affect weather and living conditions of people there. Therefore, there is an essential necessity for more detailed investigations into the variability of blocking events in the region. In this paper, we investigate wintertime blocking events identified over Western Siberia (60° E–90° E) and their relation with the surface temperature in this region over the period 2004 through 2016. We define wintertime as the time interval from 1 November to 1 March.

We wrote in Antokhina et al. [8] that detecting blockings purely over Western Siberia (or another sufficiently narrow longitudinal sector) is a formal procedure. Addressing those processes as independent processes is, strictly speaking, incorrect. Most of the cases that we addressed in this paper (see Figure 3, Figure 4 and Figure 5) also testify to this. Intensive dynamic processes over Western Siberia appear, as a rule, either to be a part of larger-scale events or the periphery of the latter. In all of the 14 cases investigated, there was, preferentially, a cold inflow from Arctic through Western Siberia into the southern regions. One can also see some signatures of the advective heat transport over Western Siberia (see, for example, Figure 5). But such transports (although they facilitate the blocking evolution within certain periods) are too weak to provide a steady dipole pattern in temperature anomalies. In all four “non-dipole” situations that we detected, Western Siberia was away from strong blocking evolving either over Europe or over the Far East.
Analyzing the PV2-θ distributions in Figure 4 and Figure 5, one should also note an obvious role of blockings in warm air transport into the polar region. This fact implies the possibility that blockings participate in Arctic warming [16]. On the PV2-θ distributions, one can also see the Arctic cold air advection (caused by blockings) into lower latitudes is preferably implemented over Western Siberia. This results in a strong cooling of southern Siberia. Which, in turn, may lead to a surface anticyclone formation. This fact testifies to the idea stated in Wang et al. [6] about the strong effect of winter Siberian blockings on the Asian high intensity.
In the future, it would be interesting to expand the study of winter blocking episodes over Western Siberia by examining their surface temperature impacts in terms of additional variables (e.g., precipitable water or cloud cover modulating outgoing longwave radiation). Similar work has been carried out in Trigo et al. [17], which presents comprehensive multivariable characterization of the climatic impacts of winter blocking and strong zonal-flow (non-blocking) episodes over the Euro-Atlantic sector.

We investigated 14 events of winter atmospheric blocking over Western Siberia within 2004–2016 (12 winter seasons) and studied their effect on the surface temperature in this region. Within three winters out of twelve, there were no blocking events over the region: 2009/2010, 2013/2014, and 2014/2015. Four winters featured a high blocking frequency: 2004/2005 (2 events), 2006/2007 (2), 2010/2011 (3), 2011/2012 (2). Five winters had one event each: 2005/2006, 2007/2008, 2008/2009, 2012/2013, 2015/2016.
For each of the 14 events, we calculated the surface temperature anomalies in the northern and in the southern parts of Western Siberia. Upon analyzing all the events, we separated the temperature anomaly distributions into two groups: dipole distributions (10 events) and “non-dipole” situations (4 events). A dipole pattern represents a positive anomaly (or values close to the norm) of the surface temperature in the region’s north and a negative anomaly (or values close to the norm) in the south.
The PV2-θ analysis (advection characteristics) showed that strong advection is characteristic of the events with a dipole pattern of the surface temperature anomalies. Warm air penetrates deeply northward (into the Arctic) in such processes through the blocking western periphery. Cold arctic air propagates through the blocking eastern periphery via Western Siberia far southwest. In each of the four “non-dipole” situations that we detected, Western Siberia appeared away from strong blocking events evolving either over Europe or over the Far East. Generally, the analysis of all the 14 events showed that the blockings calculated over Western Siberia may not, strictly speaking, be addressed as an independent phenomenon. They appear, as a rule, either a part of larger-scale events or at the periphery of the latter. In each of the 14 cases investigated, there was an inflow of cold air from Arctic into the southern regions through Western Siberia. There were also signatures for the heat advective transport over Western Siberia. However, such transports are too weak to provide a steady dipole pattern in the PV2-θ and in the surface temperature anomalies.

The study was supported by the Russian Scientific Foundation Project No. 17-17-01095. 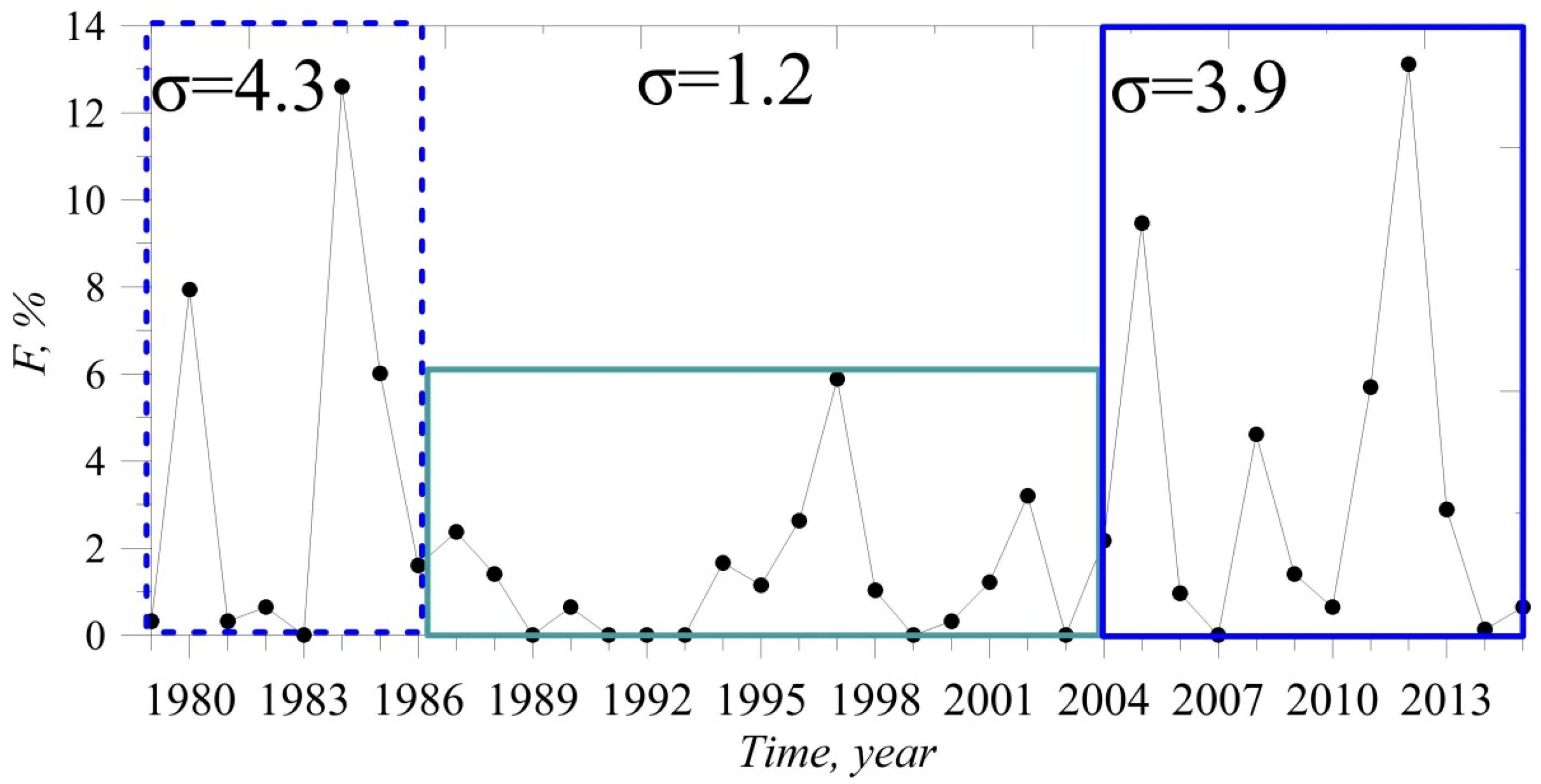