We use the aerosol SSA data provided by AERONET as the Version 2, Level-2 (cloud screened and quality assured) aerosol inversion product [40]. We also utilize AOD data available as the Version 2, Level-2 direct sun AERONET observations [39]. The data representing aerosol properties in the total atmospheric column were retrieved from diffuse sky radiance and direct sun radiance measurements performed by Cimel Electronique sun photometers and are publicly available for downloading from the AERONET website [54]. We use SSA observations at the 440-, 675- and 869-nm wavelengths and AOD values for the 440- and 500-nm wavelengths.
In our analysis, we consider the AERONET data available for the period of summer months (June–August) of 2012 from the Tomsk-22 (56°25′01″ N, 84°04′26″ E) and Yakutsk (61°39′43″ N, 129°22′01″ E) sites situated in Siberia. Unfortunately, the multi-day Level-2 SSA data for the fire season of 2012 were not available from any other Siberian stations. Furthermore, there were almost no data available from the Tomsk-22 and Yakutsk stations for spring and fall months of 2012.
To obtain estimates of the EC/OC ratio, we selected the SSA retrievals satisfying three criteria (see Table 1). First, it was required that AOD at 500 nm exceeds the value of 0.5. Taking into account the corresponding model results (see Section 3), this AOD value was chosen as an indicator of a predominant contribution of biomass burning to aerosol observed in almost pristine conditions of Siberian boreal forest. The second selection criterion was introduced to exclude situations where aerosol optical properties might be significantly affected by humidification of aerosol particles. Specifically, based on available studies of the effects of humidity on BB aerosol (e.g., [55,56]), we disregarded the observed cases where the average relative humidity (RH) in the aerosol column was greater than 60%. Values of RH were evaluated as described below in Section 2.1.2. Finally, the third selection criterion was introduced to minimize the possibility that observed aerosol optical properties are strongly affected by changes in particle morphology and composition that may occur [57,58] as a result of atmospheric aging of BB aerosol. The selection was based on our estimates of the photochemical age of BB aerosol (see Section 2.1.2): observations of aerosol aged more than 30 h were excluded from the analysis. While choosing the threshold age value (which, ideally, should be as small as possible), we tried to ensure that the amount of the remaining data would be sufficient for statistical inferences. With the current choice (30 h), our analysis involved 20 observations (including 14 and 6 observations at the Tomsk-22 and Yakutsk sites, respectively), while nearly the same amount of available observations (from the both stations considered) satisfying the two other criteria were disregarded.
Note that one of the major screening criteria originally applied by AERONET to inversion data comprising the Level-2 product is that AOD at 440 nm (AOD440) must not be less than 0.4. This criterion allows constraining the error of SSA retrievals [59], but at the expense of the invalidation of many SSA retrievals, which are otherwise available as the Level-1.5 inversion product [60]. The uncertainty in the SSA retrievals in situations with prevailing BB aerosol was estimated to be ±0.03 [59] when AOD440 is larger or equal to 0.5.
In this study, we also utilized the Fire Radiative Power (FRP) data derived from the MODIS satellite measurements [61]. The FRP data were obtained as the Collection 6 Level 2 active fire product through the Reverb metadata discovery tool [62] and were used to specify BB emissions for our simulations described below.

2.2. Method for Estimation of the EC/OC Ratio

In this paper, we examined feasibility of using observations of aerosol optical properties at AERONET sites to estimate the EC/OC mass ratio in BB aerosol in Siberia and to create a parameterization relating the EC/OC ratio with the ratio of AAOD and AOD retrievals from available satellite observations. Our method for estimation of the EC/OC ratio is based on the recent robust findings from the FLAME-4 study [52] of the chemical composition and optical properties of aerosol emitted from laboratory combustion of a range of wildland fuels. Specifically, consistent with the experimental findings, we presumed that SSA of BB aerosol particles at the submicrometer wavelengths depends linearly on the elemental to total carbon ratio, EC/(EC + OC), with the coefficient of proportionality of about minus unity. Using the retrievals at the 869-, 675- and 440-nm wavelengths from the measurements at the “Tomsk-22” and “Yakutsk” AERONET sites in summer 2012, we obtained estimates for the EC/OC ratio in BB aerosol in Siberia and examined the consistency of the parameterizations derived earlier [52] from the FLAME-4 data for SSA at the 660- and 405-nm wavelengths. Simulations performed with the CHIMERE chemistry transport model were employed to ensure that BB aerosol was a predominant aerosol type in the observed episodes selected for our analysis, as well as to estimate the photochemical age of BB aerosol in those episodes.
Our estimates of the EC/OC mass ratio range from 0.015–0.077, with the mean value of 0.036 (±0.009). The estimated mean value of the EC/OC ratio is found to be significantly smaller than the corresponding value (0.06) predicted by the BB aerosol simulations based on the emission factors specified in the GFED4 emission inventory, but in a very good agreement with the recently reported [74] value of the EC/OC enhancement ratio (0.038) evaluated in long-term in situ measurements of carbonaceous aerosol at the Zotino tall tower observatory. Our estimates indicate that the EC/OC mass ratio tends to increase with the photochemical age of BB aerosol, although the statistical significance of the tendency is rather low. No association is found between the EC/OC ratio and ambient relative humidity (RH) in the range of RH values less than 60%; observations corresponding to higher levels of RH were not considered in this study.
The EC/OC ratio estimates derived from the AERONET SSA observations with our method using the combination of observations at 869-nm and 675-nm wavelengths are found to be consistent with the corresponding estimates derived in the same way, but using the combination of observations at 869-nm and 440-nm wavelengths, although the estimates in the latter case proved to be much more uncertain. In contrast, there are significant discrepancies between the estimates obtained using the AERONET data with the original FLAME-4 parameterizations for SSA of fresh BB aerosol at the 660- and 405-nm wavelengths. Specifically, the parameterization for 405 nm is found to strongly underestimate the EC/OC ratio. We argue that the underestimation may be due to a decrease of BrC absorption by atmospheric aging of BB aerosol. Therefore, possible future applications of parameterizations for the EC/OC ratio, which are based on SSA measurements of fresh BB aerosol at wavelengths where the BrC absorption may be significant, to the actual aging BB aerosol require special precautions.
Finally, we proposed a parameterization relating the EC/OC ratio and the ratio of the absorption AOD to the extinction AOD at 388- and 550-nm wavelengths, respectively. Since the corresponding absorption and extinction AOD data are presently available as retrievals from the OMI and MODIS satellite measurements, this parameterization may be helpful for constraining EC (or BC) emissions from wildfires in Siberia. The applicability of our parameterization to other regions affected by intense biomass burning requires further research.

This study was supported by the Russian Science Foundation (Grant Agreement No. 15-17-10024). The authors acknowledge the free use of the AERONET data available from https://aeronet.gsfc.nasa.gov.

The authors declare no conflict of interest. The founding sponsors had no role in the design of the study; in the collection, analyses or interpretation of data; in the writing of the manuscript; nor in the decision to publish the results. 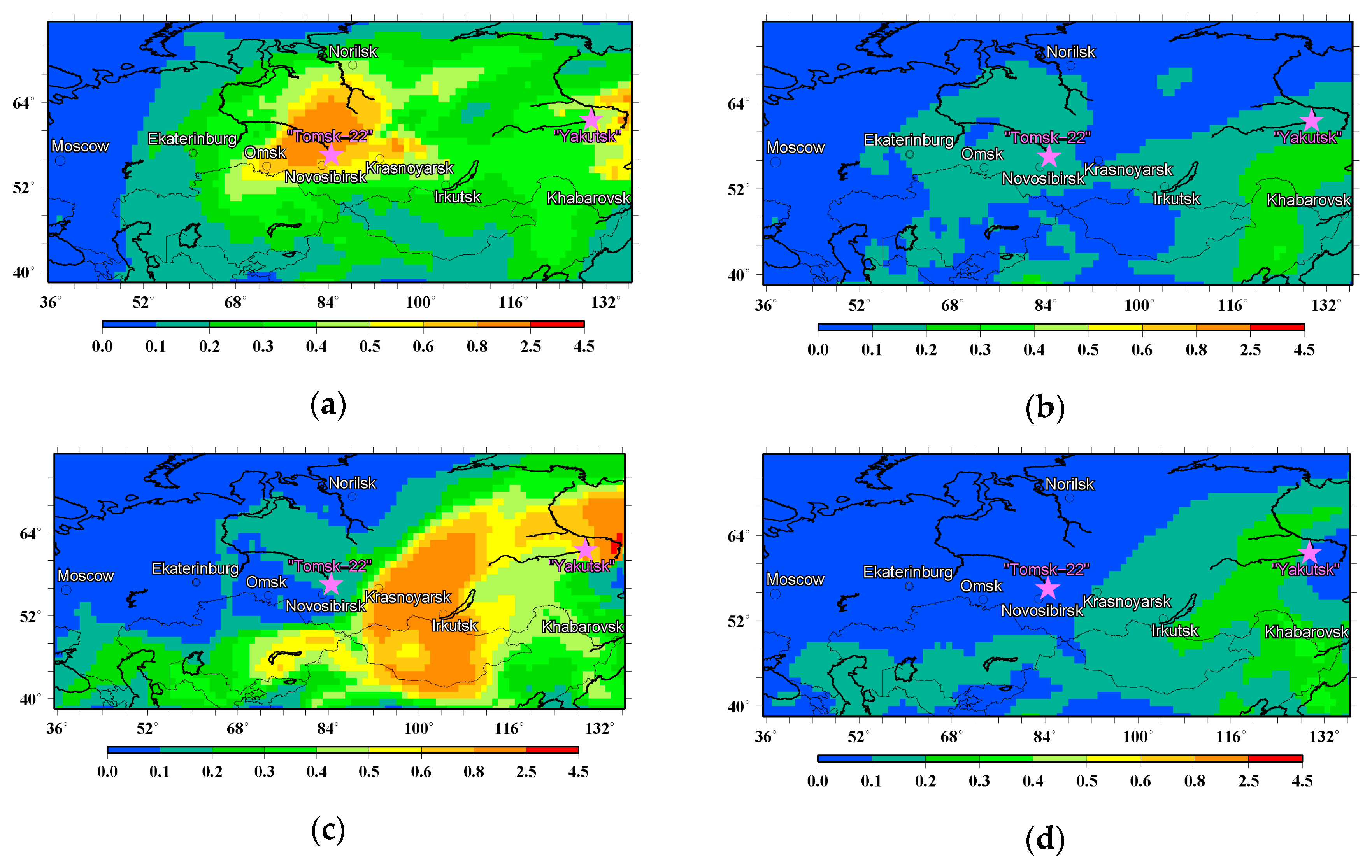 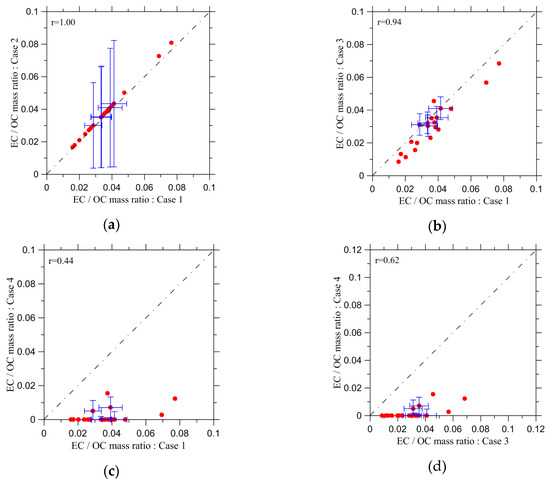 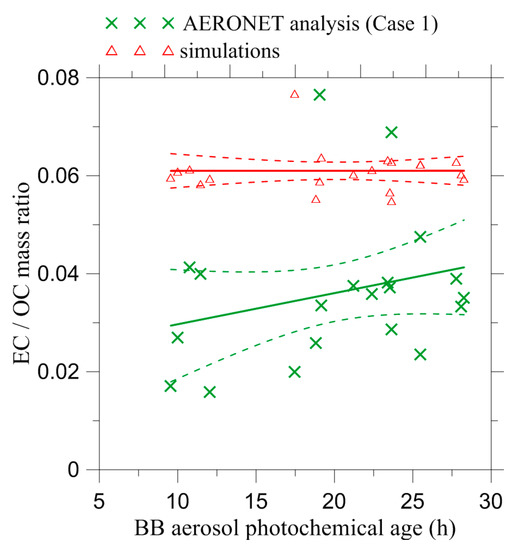 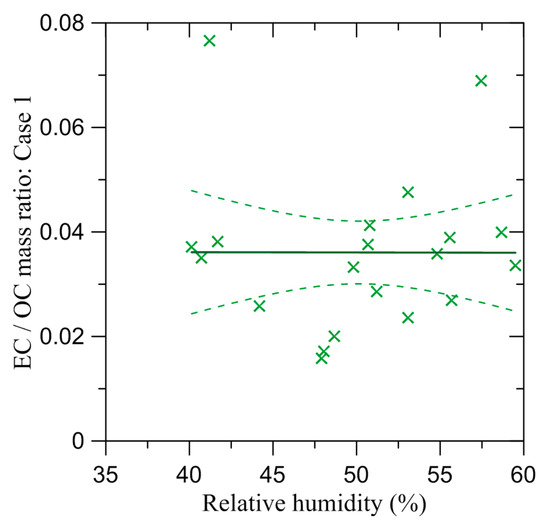 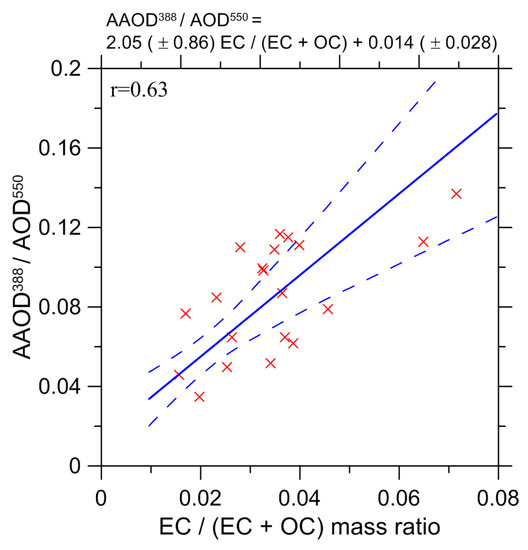