The 2015 release of the precipitation climatology from the Global Precipitation Climatology Centre (GPCC) for 1951–2000, based on climatological normals of about 75,100 rain gauges, allows for quantification of mean land surface precipitation as part of the global water cycle. In GPCC’s 2011-release, a bulk climatological correction was applied to compensate for gauge undercatch. In this paper we derive an improved correction approach based on the synoptic weather reports for the period 1982–2015. The compared results show that the climatological approach tends to overestimate the correction for Central and Eastern Europe, especially in the northern winter, and in other regions throughout the year. Applying the mean weather-dependent correction to the GPCC’s uncorrected precipitation climatology for 1951–2000 gives a value of 854.7 mm of precipitation per year (excluding Antarctica) or 790 mm for the global land surface. The warming of nearly 1 K relative to pre-industrial temperatures is expected to be accompanied by a 2%–3% increase in global (land and ocean) precipitation. However, a comparison of climatology for 30-year reference periods from 1931–1960 up to 1981–2010 reveals no significant trend for land surface precipitation. This may be caused by the large variability of precipitation, the varying data coverage over time and other issues related to the sampling of rain-gauge networks. The GPCC continues to enlarge and further improve the quality of its database, and will generate precipitation analyses with homogeneous data coverage over time. Another way to reduce the sampling issues is the combination of rain gauge-based analyses with remote sensing (i.e., satellite or radar) datasets. View Full-Text
Keywords: global precipitation; global water cycle; climate change; rain-gauge undercatch correction global precipitation; global water cycle; climate change; rain-gauge undercatch correction
►▼ Show Figures 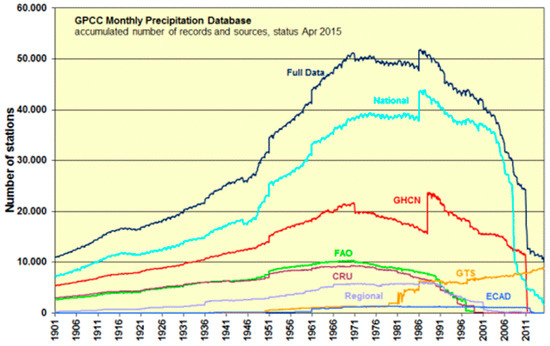