Fundamental properties of multiply charged molecular ions, such as energetics, structure, stability, lifetime and fragmentation dynamics, are relevant to understand and model the behavior of gaseous plasmas as well as ionosphere and astrophysical environments. Experimental determinations of the Kinetic Energy Released (KER) for ions originating from dissociations reactions, induced by Coulomb explosion of doubly charged molecular ions (molecular dications) produced by double photoionization of CO2, N2O and C2H2 molecules of interest in planetary atmospheres, are reported. The KER measurement as a function of the ultraviolet (UV) photon energy in the range of 28–65 eV was extracted from the electron-ion-ion coincidence spectra obtained by using tunable synchrotron radiation coupled with ion imaging techniques at the ELETTRA Synchrotron Light Laboratory Trieste, Italy. These experiments, coupled with a computational analysis based on a Monte Carlo trajectory simulation, allow assessing the probability of escape for simple ionic species in the upper atmosphere of Mars, Venus and Titan. The measured KER in the case of H+, C+, CH+, CH2+, N+, O+, CO+, N2+ and NO+ fragment ions range between 1.0 and 5.5 eV, being large enough to allow these ionic species to participate in the atmospheric escape from such planets into space. In the case of Mars, we suggest a possible explanation for the observed behavior of the O+ and CO22+ ion density profiles. View Full-Text
Keywords: molecular dications; astrochemistry; planetary atmospheres; ionospheres; synchrotron radiation; ions escape; mass spectrometry; coincidence technique; ion imaging molecular dications; astrochemistry; planetary atmospheres; ionospheres; synchrotron radiation; ions escape; mass spectrometry; coincidence technique; ion imaging
►▼ Show Figures 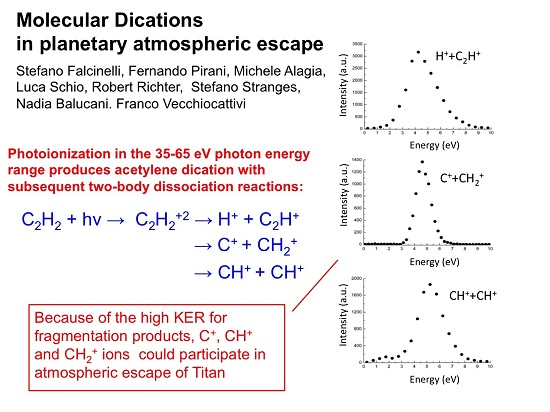