Ozone depletion events (ODEs) during the Arctic spring have been investigated since the 1980s. It was found that the depletion of ozone is highly associated with the release of halogens, especially bromine containing compounds. These compounds originate from various substrates such as the ice/snow-covered surfaces in Arctic. In the present study, the dependence of the mixing ratios of ozone and principal bromine species during ODEs on the initial composition of the Arctic atmospheric boundary layer was investigated by using a concentration sensitivity analysis. This analysis was performed by implementing a reaction mechanism representing the ozone depletion and halogen release in the box model KINAL (KInetic aNALysis of reaction mechanics). The ratios between the relative change of the mixing ratios of particular species such as ozone and the variation in the initial concentration of each atmospheric component were calculated, which indicate the relative importance of each initial species in the chemical kinetic system. The results of the computations show that the impact of various chemical species is different for ozone and bromine containing compounds during the depletion of ozone. It was found that CH3CHO critically controls the time scale of the complete removal of ozone. However, the rate of the ozone loss and the maximum values of bromine species are only slightly influenced by the initial value of CH3CHO. In addition, according to the concentration sensitivity analysis, the reduction of initial Br2 was found to cause a significant retardant of the ODE while the initial mixing ratio of HBr exerts minor influence on both ozone and bromine species. In addition, it is also interesting to note that the increase of C2H2 would significantly raise the amount of HOBr and Br in the atmosphere while the ozone depletion is hardly changed. View Full-Text
Keywords: concentration sensitivity analysis; ozone depletion event; bromine explosion mechanism concentration sensitivity analysis; ozone depletion event; bromine explosion mechanism
►▼ Show Figures 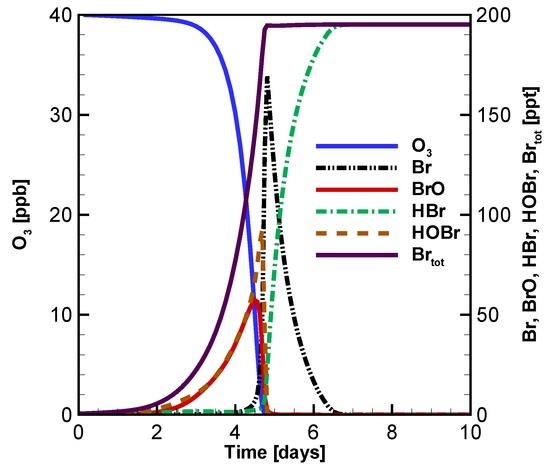 Cao, L.; He, M.; Jiang, H.; Grosshans, H.; Cao, N. Sensitivity of the Reaction Mechanism of the Ozone Depletion Events during the Arctic Spring on the Initial Atmospheric Composition of the Troposphere. Atmosphere 2016, 7, 124.


Cao L, He M, Jiang H, Grosshans H, Cao N. Sensitivity of the Reaction Mechanism of the Ozone Depletion Events during the Arctic Spring on the Initial Atmospheric Composition of the Troposphere. Atmosphere. 2016; 7(10):124.


Cao, Le; He, Min; Jiang, Haimei; Grosshans, Holger; Cao, Nianwen. 2016. "Sensitivity of the Reaction Mechanism of the Ozone Depletion Events during the Arctic Spring on the Initial Atmospheric Composition of the Troposphere." Atmosphere 7, no. 10: 124.