Designation of Environmental Impacts and Damages of Turbojet Engine: A Case Study with GE-J85
Previous Article in Special Issue

Multimedia fate and transport models are used to evaluate the long range transport potential (LRTP) of organic pollutants, often by calculating their characteristic travel distance (CTD). We calculated the CTD of several polycyclic aromatic hydrocarbons (PAHs) and metals using two models: the OECD POV& LRTP Screening Tool (The Tool), and ELPOS. The absolute CTDs of PAHs estimated with the two models agree reasonably well for predominantly particle-bound congeners, while discrepancies are observed for more volatile congeners. We test the performance of the models by comparing the relative ranking of CTDs with the one of experimentally determined travel distances (ETDs). ETDs were estimated from historical deposition rates of pollutants to peat bogs in Eastern Canada. CTDs and ETDs of PAHs indicate a low LRTP. To eliminate the high influence on specific model assumptions and to emphasize the difference between the travel distances of single PAHs, ETDs and CTDs were analyzed relative to the travel distances of particle-bound compounds. The ETDs determined for PAHs, Cu, and Zn ranged from 173 to 321 km with relative uncertainties between 26% and 46%. The ETDs of two metals were shorter than those of the PAHs. For particle-bound PAHs the relative ETDs and CTDs were similar, while they differed for Chrysene. View Full-Text
Keywords: long-range transport potential; PAHs; characteristic travel distance; transport modeling long-range transport potential; PAHs; characteristic travel distance; transport modeling
►▼ Show Figures 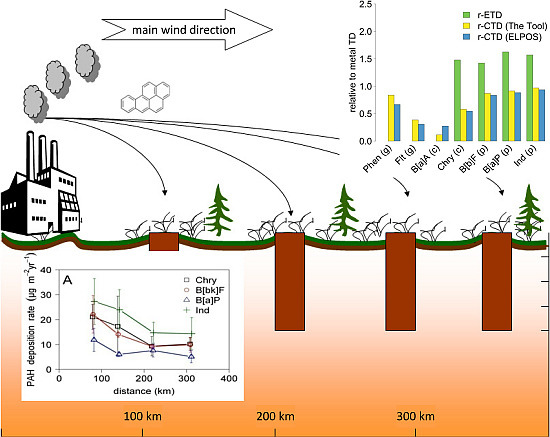