The regional climatic comfort index (CCI) deteriorated significantly due to climate change and anthropogenic interference. Knowledge, regarding the long-term temporal dynamics of the CCI in typical regions, should be strengthened. In this study, we analyze the temporal and spatial evolution of CCI from 1969 to 2018 in Guangdong Province, based on a number of meteorological indicators. Additionally, the population exposure to climate unconformity was examined since 1990 with the help of population data. Our study found that: (1) the warming and humidifying of the summer climate served as the main driving force for the continuous deterioration of the CCI, with comfortable days decreased by 1.06 day/10 year and the extremely muggy days increased by 2.83 day/10 year; (2) spatially, the lowest climate comfortability concentrated in southwestern Guangdong with more than 50 uncomfortable days each year, while the climate comfortability in northeastern Guangdong tends to deteriorate with a higher rate, which can reach as high as 6 day/10 year; (3) in summer, the population exposure to uncomfortable climate highly centralized in the Pearl River Delta, Shantou, Jieyang, and the surrounding areas, and both area and population exposure showed increasing trends. Particularly, Shenzhen held the highest growth rate of population exposure with an increased rate of 2.94 million/10 year; (4) although the discomfort distribution and deterioration rate vary across the province, the spatial heterogeneity of comfortability is diminishing in Guangdong Province. This study will provide a scientific reference in areas of regional urban planning, thermal environment improvement, local resident health risk analysis, and key strategy implementation. View Full-Text
Keywords: climate comfort index; temperature–humidity index; wind effect index; clothing index; population exposure climate comfort index; temperature–humidity index; wind effect index; clothing index; population exposure
►▼ Show Figures 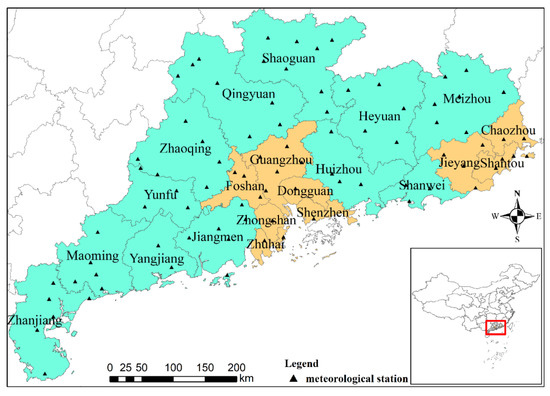