Climate models participated in the High Resolution Model Intercomparison Project (HighResMIP) of Coupled Model Intercomparison Project 6 (CMIP6) are evaluated to reveal the impact of enhanced resolution in simulating the climatological distribution of precipitation over China. The multi-model mean (MME) of five models with 30–50 km horizontal resolution in the atmosphere (MME-50) had a better performance in reproducing the observed spatial patterns of precipitation over Northwest China and Southwest China than the MME of their lower-resolution (70–140 km) models (MME-100). Such an improvement is mainly attributed to the topographical rainfall reproduced by the higher-resolution models, which have the superiority of reproducing the local vertical circulation over the complex terrain. The MME-50 also improves the skill score of the 850-hPa southwesterly of the Indian-Burma trough relative to the MME-100, which may contribute to better simulation skill of precipitation over Southwest China. The MME-50 (0.92) has a close skill score to the MME-100 (0.91) in the simulation of East Asian summer monsoon, which explains why the MME-50 cannot improve the simulation skill of the precipitation over Southeast China and Northern China. The skill score of the precipitation over the Tibetan Plateau (TP) simulated by the MME-50 is even lower than the MME-100, revealing that simulating the climate over the high plateau is still a challenge for the high-resolution models.
Keywords: high-resolution; climate model; CMIP6; HighResMIP; precipitation; East Asian summer monsoon high-resolution; climate model; CMIP6; HighResMIP; precipitation; East Asian summer monsoon

Several modeling groups completed HighResMIP hist-1950 simulations with at least two horizontal resolutions. The data are archived at the Earth System Grid Federation (ESGF) website under CMIP6 HighResMIP (https://esgf-node.llnl.gov/search/cmip6/, accessed on 30 April 2021). We choose the models of five modeling groups with two horizontal resolutions at about 100 km and 50 km in the atmosphere (Table 1). The high-resolution models including BCC-CSM2-HR, CNRM-CM6-1-HR, EC-Earth3P-HR, HadGEM3-GC3-HH, and MPI-ESM1-2-XR have horizontal resolutions from 35 km to 50 km in the atmosphere. Their corresponding lower-resolution models are BCC-CSM2-MR, CNRM-CM6-1, EC-Earth3P, HadGEM3-GC31-MM, and MPI-ESM1-1-HR, respectively. Their horizontal resolutions vary from 70 km to 140 km. Most of the high-resolution models in HighResMIP have the same physics package as their lower resolution (standard) model versions, aiming to highlight the role of increased horizontal resolution [9]. BCC-CSM2-MR does not perform the hist-1950 simulations, and we use the historical simulation of CMIP6, which is the standard resolution model of BCC-CSM2-HR.
The multi-model mean (MME) of the five high-resolution models is named MME-50, while the MME of the five lower-resolution models is named MME-100. The comparison between MME-100 and MME-50 reveals the benefits of the improved horizontal resolution from 100 km to 50 km in the atmosphere. Except for the MPI models, the oceanic component of the high-resolution model also has a finer mesh than that in its lower-resolution model.
The output of hist-1950 simulations following the protocol of HighResMIP is used in this study. The monthly output of the first ensemble member of each model is used in this study, although some models provided several ensemble members. In the simulation of hist-1950, models are driven by the varying external forcings covering greenhouse gases, aerosols, ozone, solar activity, volcanoes, and land use. The external forcing data are provided by CMIP6 [8]. The climatology is adopted for the mean during 1979–2014.
The ERA5 Reanalysis dataset [19], with a horizontal resolution of 31 km in longitude and latitude, is used to verify the simulation including zonal wind, meridional wind and vertical wind, and is considered as the observation in this study. The observed precipitation data are from the 0.25° × 0.25° gridded monthly dataset of CN05.1 [20], based on 2416 station observations in China. This dataset has been widely used in the evaluations of model performances in China [21,22,23]. The observation and the output of all climate models are interpolated to a 0.5° x 0.5° common grid by bilinear interpolation.
The domain over China is divided into five sub-regions including Northwest (70°–110° E, 36°–50° N), TP (75°–100° E, 20°–36° N), Southwest China (100°–110° E, 20°–36° N), Southeast (110°–122° E, 18°–36° N), and Northern China (110°–130° E, 36°–53° N), as shown in Figure 1. Hereinto, Northwest China and Southwest China are the two regions with the topography ranging from the 400 m to 4000 m. In most areas of the TP, the altitude is above 4000 m.
To quantitatively estimate model performances, we calculated the spatial correlation, standard deviation and skill score of the precipitation in the different domains of China. The method used to calculate the skill score was from Chen et al. [24], and was used to verify model performance of the precipitation and EASM by previous studies [9,10,25]. The formula is:
In which R denotes the spatial pattern correlation between the model and observation. SDR is the ratio of spatial standard deviation of the model against the observation. In calculating the skill of wind field, the zonal wind and meridional wind are converted into a one-dimensional array.

3.2. Time-Evolution of Precipitation in Southwest China

In Southwest China, there are the Hengduan Mountain, the Sichuan Basin, and the Wushan Mountain from the west to the east. The observed monthly precipitation averaged along 29°–30° N presents maximum centers related to the terrain, which are at about 102° E (eastern slope of the Hengduan Mountain) in July–August, at 110° E (the eastern slope of the Wushan Mountain) in July, and at 115°–120° E (the Yangtze River valley) in June (Figure 5a). BCC-CSM2-MR cannot produce the rainfall center at 110° E and have dry biases in the Yangtze River valley, while BCC-CSM2-HR has a much better performance (Figure 5b,c). CNRM-CM6-1-HR also performs better in capturing the timing and strength of the rainfall centers at the latitudes of 110° E and 115°–120° E. The other three higher-resolution models all show some improvement in the simulation of the time and strength of the rainfall at the latitude of 110° E, but not in the Yangtze River valley (Figure 5h–k).
The time evolution of the precipitation and the location of the rainfall centers are much better simulated by the MME-50 than the MME-100, especially the rainfall at 110° E in summer (Figure 5l,m). This indicates the benefits of the increased horizontal resolution in capturing the precipitation over Southwest China. But the MME-50 still overestimates the spring rainfall at the latitude of 102° E and underestimates the summer rainfall in the Sichuan Basin.

The generation of the EASM is related to the high plateau [26]. We further investigate whether the high-resolution models of HighResMIP can improve the simulation of the climatological mean EASM. As shown in Figure 7, the models can all reproduce the monsoon systems in East Asia, including the westerly in the front of the Indian-Burma trough, the southwesterly from the South China Sea, and the southwesterly to the west of the Western Pacific Subtropical High (WPSH). The WPSH in the lower-resolution models, including EC-Earth3P, HadGEM3-GC31-MM, and MPI-ESM1-2-HR, is located to the north of the observation, leading to a weakened southwesterly in Southeast China. Their corresponding higher-resolution models show similar results, indicating no benefits from the increased horizontal resolution. The two CNRM models both well reproduce the location of the WPSH and the strength of the southwesterly in Southeast China. BCC-CSM2-HR can well simulate the southwesterly over Southeast China, but overestimate the southwesterly in Northern China. That is why BCC-CSM2-HR simulates a stronger rainfall in Northern China than the observation. The MME-100 and MME-50 simulate similar distributions of the WPSH and southwesterly in East Asia.
Skill scores of the horizontal winds at 850 hPa are calculated over the Northern Bay of Bengal (80°–110° E, 5°–25° N) where the India-Burma trough dominates, and over East Asia (0–50° N, 110°–160° E) where the EASM dominates (Figure 8). It is shown that the skill score of the winds over the Northern Bay of Bengal is better simulated in all higher-resolution models than their lower-resolution models except for BCC-CSM2-HR. The MME-50 achieves a higher skill score (0.97) than the MME-100 (0.93). This may contribute to the improved skill of the precipitation over Southwest China, since southwesterly in the front of the India-Burma trough transports water vapor to Southwest China.
Among the five higher-resolution models, only CNRM-CM6-1-HR has a higher score than its lower-resolution model (CNRM-CM6-1) in the simulation of the EASM. The MME-50 has a close skill score (0.92) to the MME-100 (0.91). Therefore, the increased resolution from 100 km to 50 m may not be efficient in improving the simulation skill of the EASM. This is consistent with the similar performances of MME-50 and MME-100 in reproducing precipitation over Southeast China and Northern China, where the monsoon precipitation dominates.

We acknowledge the World Climate Research Program for coordinating and promoting CMIP6. We thank the climate modeling groups for producing and making available their model output, and the Earth System Grid Federation (ESGF) for archiving the dataset and providing access. We thank ECMWF for providing the ERA5 dataset in Copernicus Climate Change Service (C3S) Climate Data Store. 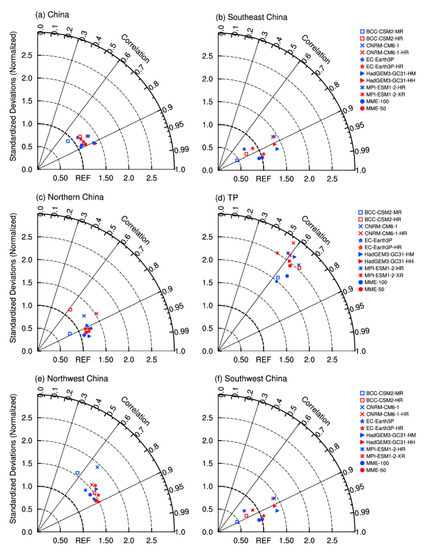 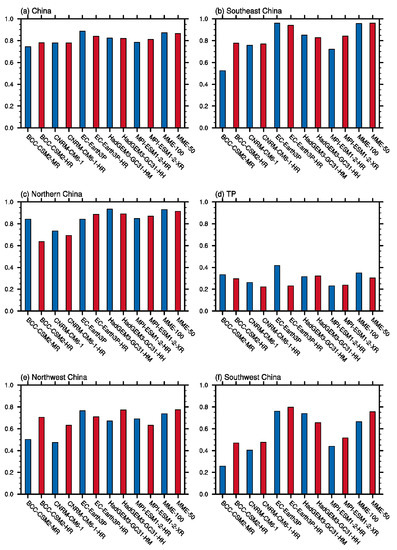 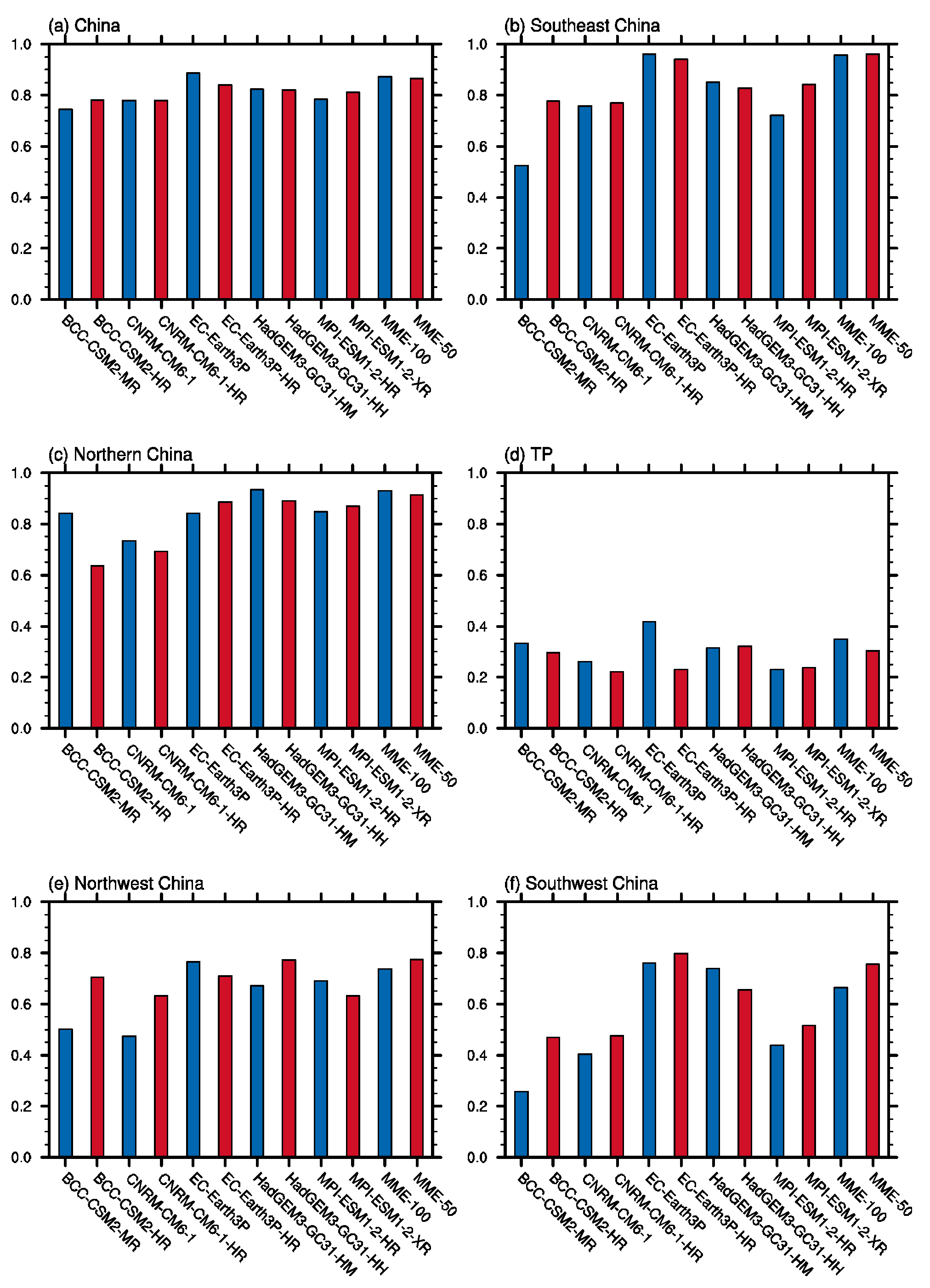 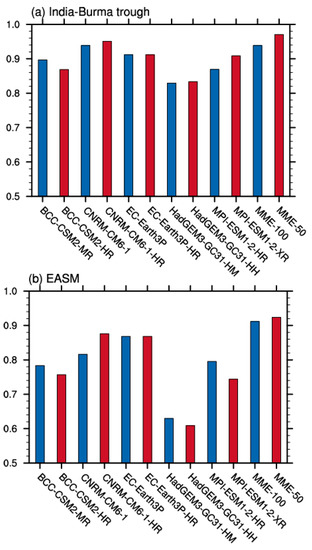