An Assessment of ERA5 Reanalysis for Antarctic Near-Surface Air Temperature

Antarctica, the southernmost continent on earth, plays a central role in the global climate system [1,2,3]. Many studies have explored climate change in Antarctica [4,5,6,7,8] and its influence, including melting of the Antarctic ice sheet and subsequent sea level rise [9]. The temperature increase is an important reason for the melting of the ice sheet [10]. However, the temperature variability in Antarctica is still not obvious compared with the warming trend of global average temperature [11]. For instance, the Antarctic Peninsula is well known to be one of the most rapidly warming regions across the Antarctic continent [12], but this trend has been absent since 1998 [13]. West Antarctica is the key region for heat and moisture in Antarctica, and it shows a significant warming trend, while there is no significant temperature change in East Antarctica [14,15]. In Antarctica, long-term observational datasets are scarce, and most weather stations are located at coastal areas [16] (Figure 1), which limits climate research in Antarctica.
Reanalysis datasets can provide a numerical description of the recent climate and describe complete and multivariate atmospheric conditions by combining a fixed data assimilation system with global observations and satellite data [2,17,18]. Over the past decades, reanalysis products have been widely used in many research fields, especially in areas with sparse observations [19,20,21]. At present, a number of available global reanalyses have been released by China [22], Europe [18], the United States [23], and Japan [24]. Many studies have assessed the performance of these datasets in different regions [25,26,27,28]. Although the estimation for ERA-Interim shows that the largest differences are found in the polar regions, particularly in Antarctica, where this reanalysis dataset differs to the greatest extent in terms of both absolute temperatures and anomalies from measured near-surface air temperatures [29,30], some studies have generally found that ERA-Interim performs well in representing Antarctic temperature [31,32,33]. ERA5 is the latest atmospheric reanalysis produced by the European Center for Medium-Range Weather Forecasts (ECMWF). As the fifth generation of ECMWF reanalysis, ERA5 contains most of the parameters available in ERA-Interim, and it has many innovative features. The ERA-Interim dataset is at a 0.7 degree resolution and ERA5 provides a much higher resolution of 0.25 degree [34]. An assessment of ERA5 in the southern Antarctic Peninsula-Ellsworth Land Region, with a specific focus on its application for ice core data, has been performed [34], while no research paper has assessed the applicability of ERA5 for Antarctic near-surface temperature. Therefore, our objective is to assess the performance of ERA5 in terms of Antarctic near-surface air temperature and to investigate whether ERA5 is a useful reanalysis for future research and model development in Antarctica.

More than 100 automatic weather stations (AWSs) have been installed in Antarctica to measure basic meteorological parameters [16,35]. For the AWS data, there are three important issues: (1) most AWSs fail to produce complete and accurate data for the harsh environment in Antarctica; (2) many AWSs have moved short distances from their original location, even several times, during their operation period; and (3) because snow accumulates on the surface, the height of some AWSs above the ground slightly changes, which normally results in slightly lower temperature readings [31,35,36]. For these reasons, the project called the Reference Antarctic Data for Environmental Research (READER) was undertaken by the Scientific Committee on Antarctic Research (SCAR). The observational data we used were collected by 9 AWSs and 32 manual stations. The data we used in the present study were all from the READER project and cover at least 20 years. Locations of the manned stations and the AWSs are shown in Figure 1, and we provide detailed information on the compared observations in Table 1. Observational data can be downloaded at https://legacy.bas.ac.uk/met/READER/surface [37]. The ice sheet mask in Figure 1 is derived from the Antarctic Digital Database (ADD), available at http://www.add.scar.org/index.jsp [38].
ERA5 reanalysis, as a part of the implementation of the EU-funded Copernicus Climate Change Service, uses the Cycle 41r2 Integrated Forecasting System (IFS) and provides data on the global weather and climate. Both ERA5 and ERA-Interim are produced by the ECMWF and use a four-dimensional variational assimilation system. Compared with ERA-Interim, ERA5 benefits from many improvements in the observation operators as well as a decade of developments in model physics, core dynamics, and data assimilation. Thus, ERA5 replaces the highly successful ERA-Interim reanalysis, which provides data from 1 January 1979 to 31 August 2019. Similarly, ERA5 reanalysis extends to 1 January 1950, and it provides hourly data on many atmospheric, land surface, and sea state parameters together with estimates of uncertainty for the first time. Compared with ERA-Interim, ERA5 has a number of new features: (1) the significantly enhanced horizontal resolution is a 31 km grid spacing in ERA5 but 79 km in ERA-Interim; (2) for radiance data, ERA5 uses version 11 of the Radiative Transfer for the TIROS Operational Vertical Sounder (RTTOV-11) as the observation operator and an all-sky approach instead of the RTTOV-7 and clear-sky approach in ERA-Interim; (3) the number of observations assimilated in ERA5 has increased remarkable relative to ERA-Interim; (4) ERA5 contains hourly output throughout and an uncertainty estimate of 63 km grid spacing; (5) ERA5 includes forcings for total solar irradiance, ozone, greenhouse gases, and some aerosols; and (6) ERA5 parameters are accumulated from previous post-processing, whereas those in ERA-Interim are accumulated from the beginning of the forecast [39,40].
ERA5 data are available free on the following web interface: https://cds.climate.copernicus.eu/#!/search?text=ERA5&type=dataset [41]. ERA-Interim data can be downloaded at https://apps.ecmwf.int/datasets/data/interim-full-daily/levtype=sfc/ [42].
Because the deviation between the grid and actual elevation can introduce temperature biases in the reanalyses, we adjust the temperature of the reanalysis grid box over the stations using the temperature environmental vertical lapse rate of 6.5 °C km−1 that is the average vertical decline rate of air temperature in the troposphere [16].
To compare the measured temperature with ERA reanalyses, it is necessary to extract the monthly temperature from reanalyses, and we take the nearest grid data as the comparative data instead of interpolating the data to where the stations located for different interpolation methods may introduce errors caused by assumptions. We selected the correlation coefficient (R), mean bias (MB), and the ratio of the standard deviations (RSD) as indicators to examine the performance of ERA5 and ERA-Interim for Antarctic near-surface temperature. Parameter calculations are executed only for the overlapping time spans. The significance of the correlations is determined by the standard t test, and F test is used to estimate the significance of trends, and the significant is at the 95% confidence interval.

3.1. The Performance of ERA5 over Antarctica

The correlation coefficients between ERA5 and observations are significant for all months, and they are higher than 0.82, and those of ERA-Interim are more than 0.84, indicating a stronger linear relationship of monthly temperature. Figure 2 displays the MB between the monthly mean air temperature measured at the 41 weather stations and the ECMWF reanalysis output data, and we also plot the RSD in this figure. For ERA5, warm bias prevails between May and September. ERA5 has a monthly bias between −0.44 and 1.19 °C, and the extreme values appear in August and December, respectively. ERA-Interim has a cold bias in all months, and this characteristic is different from that of ERA5. In particular, a large contrast in ERA5 and ERA-Interim bias occurs in winter (June–August (JJA)).
As shown in Table 2, for the whole Antarctic ice sheet, there are significant correlations between ERA5 and observations for all annual and seasonal temperature. Compared to ERA-Interim, ERA5 exhibits lower performance only in summer (December–February (DJF)). In this season, the significant correlation coefficient of ERA5 is 0.84, and the corresponding value of ERA-Interim is 0.86. Table 3 shows the bias between ERA reanalyses and observations. In general, ERA5 performs worst in summer, with the largest bias of 1.06 °C and the lowest correlation coefficient. Over the whole of Antarctica, ERA5 has good performance in autumn (March–May (MAM)) and spring (September–November (SON)), with low bias of 0.16 and 0.38 °C, and the highest significant correlation coefficients are 0.90 and 0.93, respectively. Different from the lowest bias for ERA5, which occurs in MAM, ERA-Interim has the lowest bias of 0.52 °C in JJA. The greatest bias between ERA reanalyses and observations is shown in DJF, with the cold bias of 1.06 and 0.76 °C for ERA5 and ERA-Interim, respectively. In Antarctica, a cold bias prevails for annual and seasonal mean temperatures in ERA-Interim, whereas ERA5 shows a warm bias in JJA, when the largest difference between ERA reanalyses is captured. Figure 3 shows the time series of the annual and seasonal mean temperature anomalies with respect to the 1979–2018 mean from 41 observation locations and the corresponding value of ERA reanalyses. Generally, there are no clear anomaly differences between ERA5 and ERA-Interim in Antarctica. ERA reanalyses can reflect common interannual variability, and they can capture the abrupt changes occurring in Antarctica.
The correlations, mean bias, and ratio of SDs between observations and the corresponding data from ERA reanalyses at Antarctic coastal and inland stations are shown in Figure 4, and the correlations pass the test of significance (p < 0.05). ERA5 presents the highest correlations in spring for both coastal and inland stations, with significant correlation coefficients of 0.93 and 0.94, respectively. Compare to ERA-Interim, ERA5 has higher correlations in MAM and JJA at coastal stations, and lower correlations at inland stations in these seasons. ERA-Interim always shows cold bias at coastal stations and warm bias at inland stations; somewhat differently, ERA5 has cold bias in DJF at inland stations, indicating that the cold biases seen previously for the whole continent are caused by the coastal stations. The mean bias at coastal stations is always smaller than that of inland stations in all annual and seasonal mean temperature, and both of the ERA reanalyses show this feature. For coastal stations, biases in ERA5 are smaller than in ERA-Interim for all seasons with the exception of austral summer. In MAM, ERA-Interim has the greatest bias of 0.99 and −3.25 °C for coastal and inland stations, respectively. For ERA5, only inland stations have an SD value higher than the observations in MAM, and the RSD of ERA-Interim is greater than 1 in autumn, winter, and annually at coastal stations.

3.2. The Performance of ERA5 over the Three Subregions in Antarctica

We thank the European Center for Medium-Range Weather Forecasts and Scientific Committee on Antarctic Research for providing data to improve the paper.

The authors declared that they have no conflict of interest to this work. We declare that we have no financial and personal relationships with other people or organizations that can inappropriately influence our work. 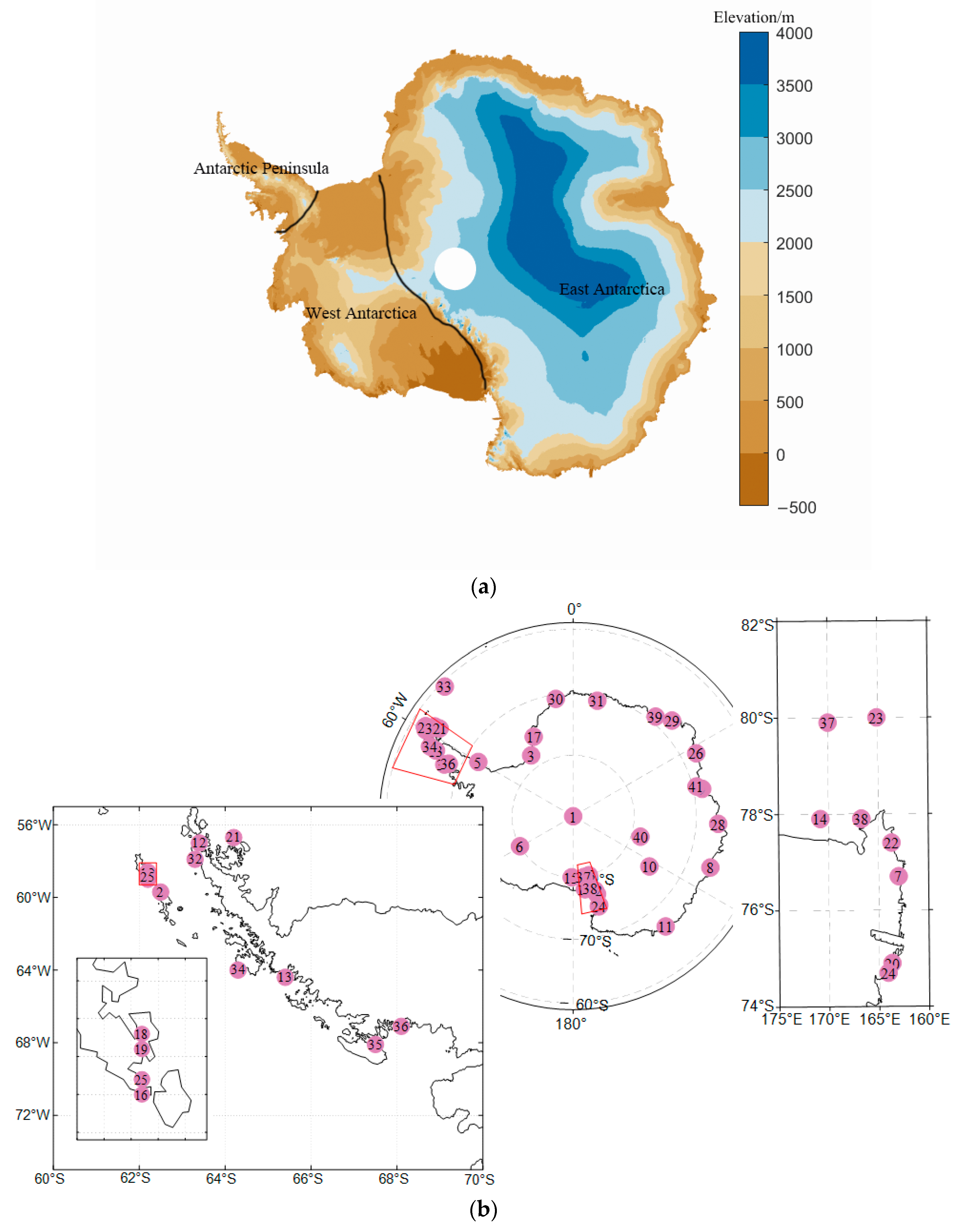 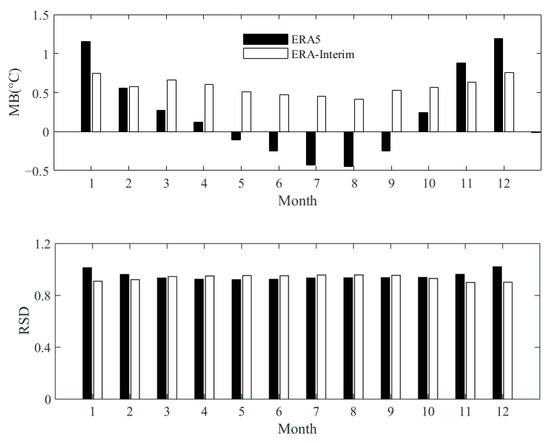 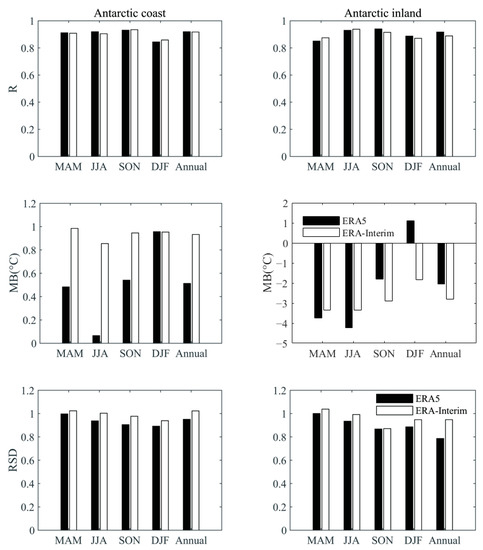 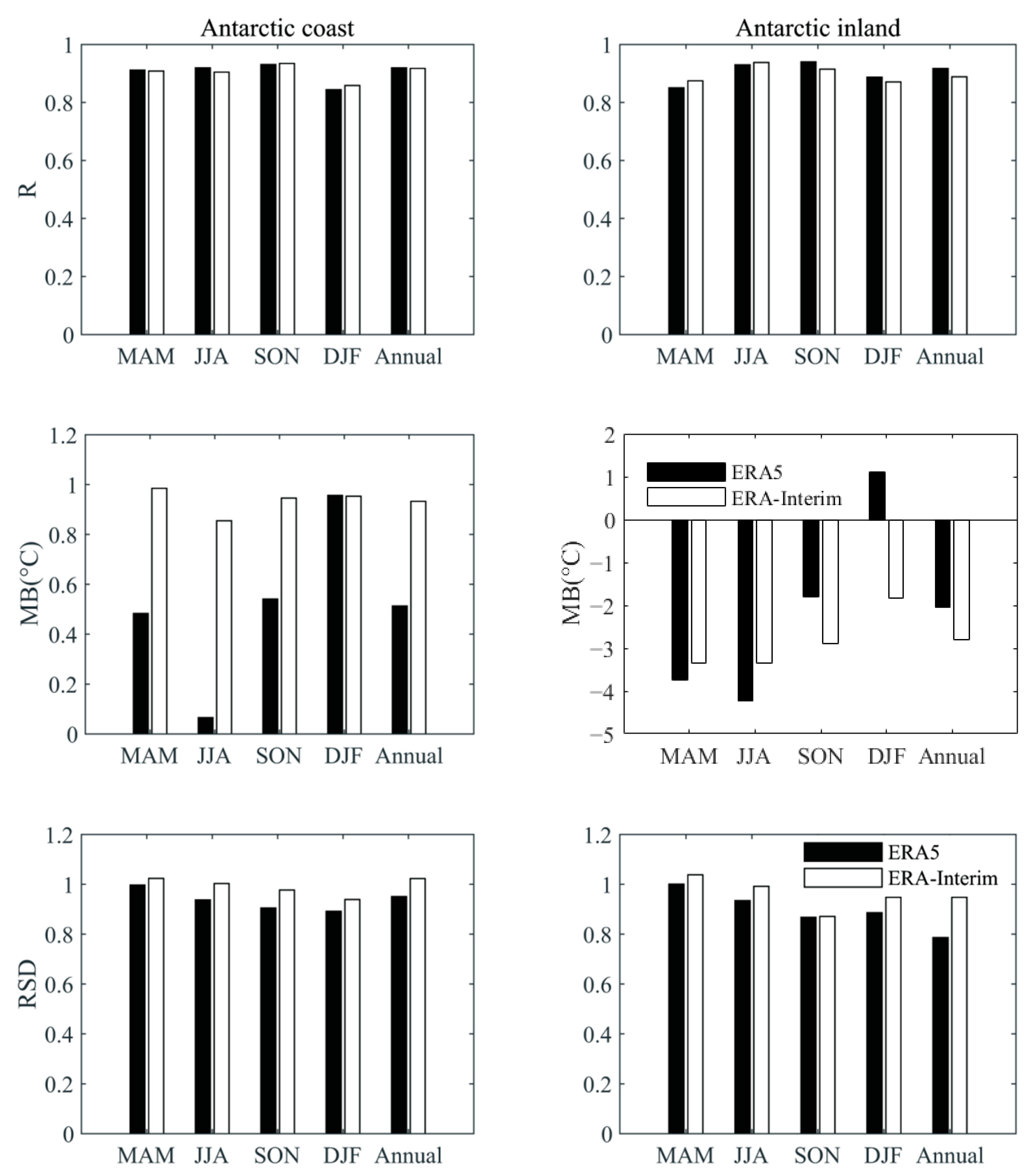 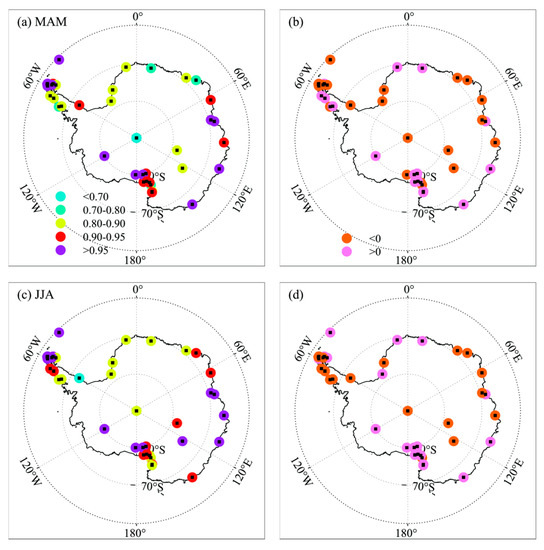 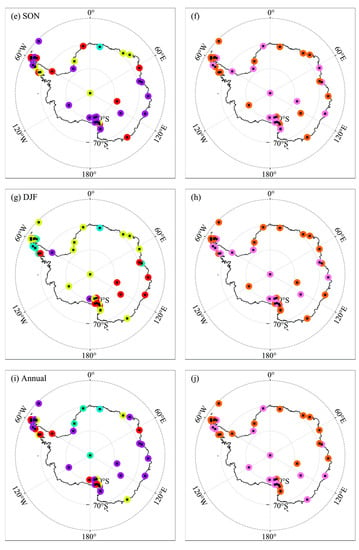 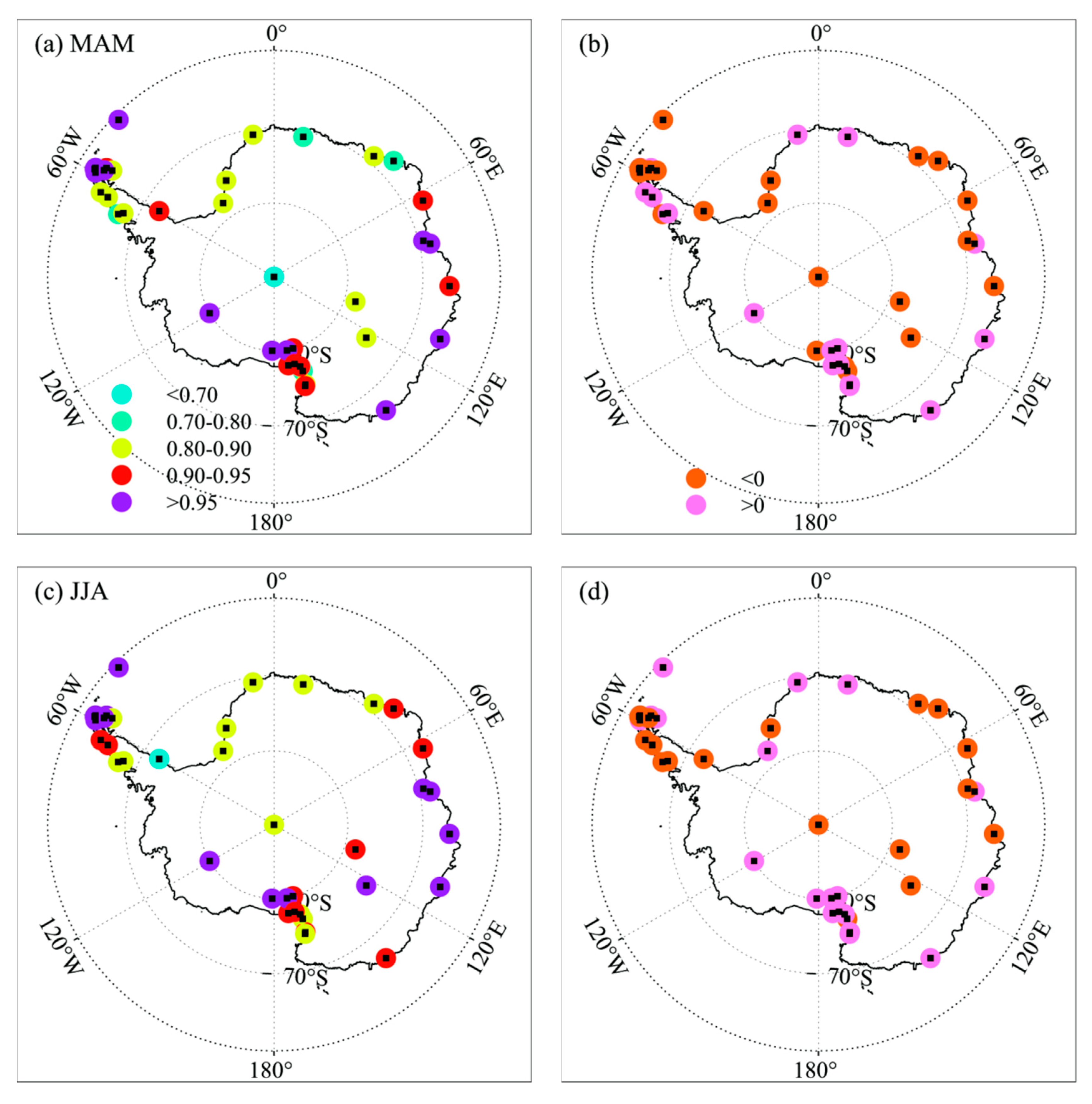 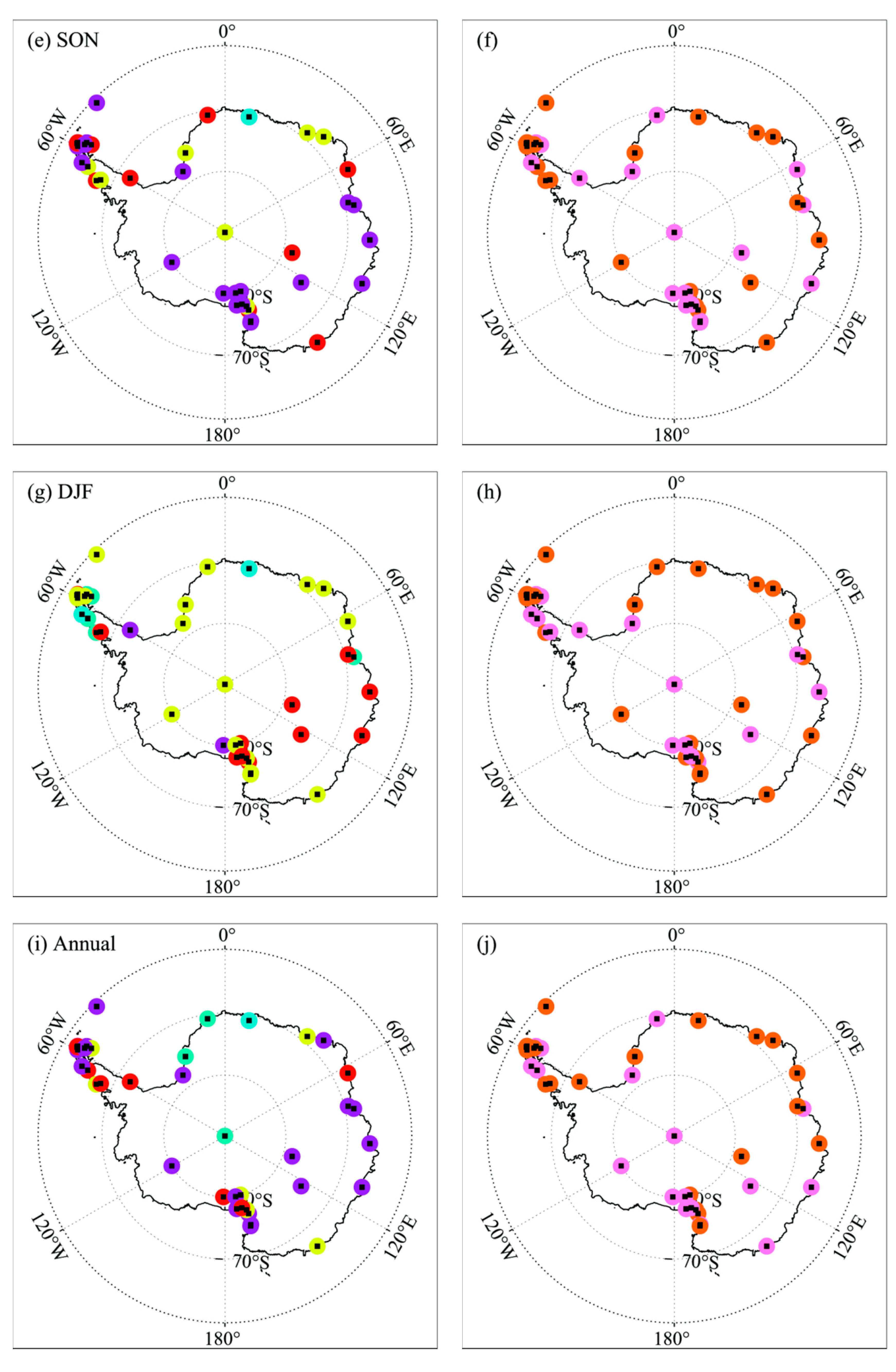 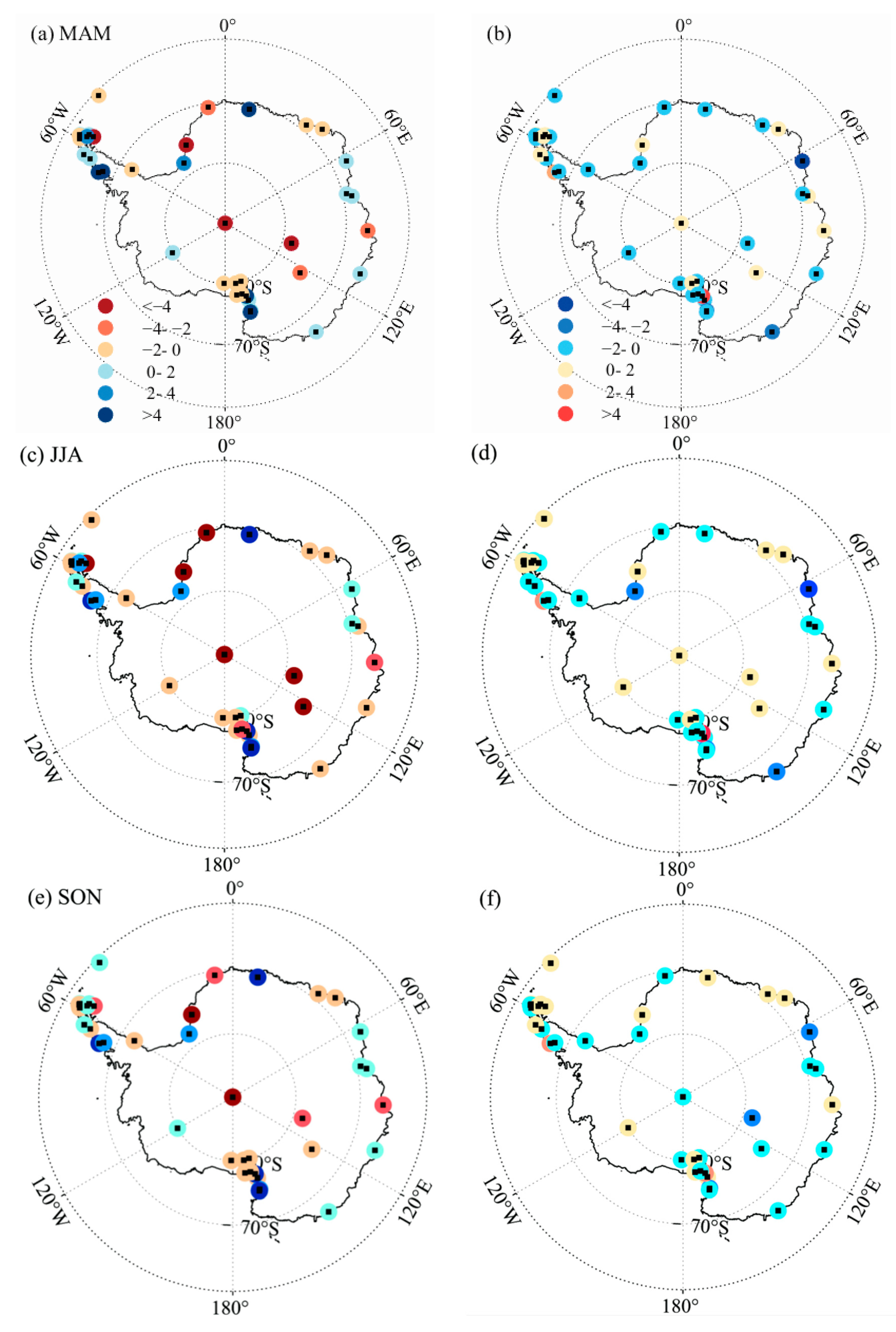 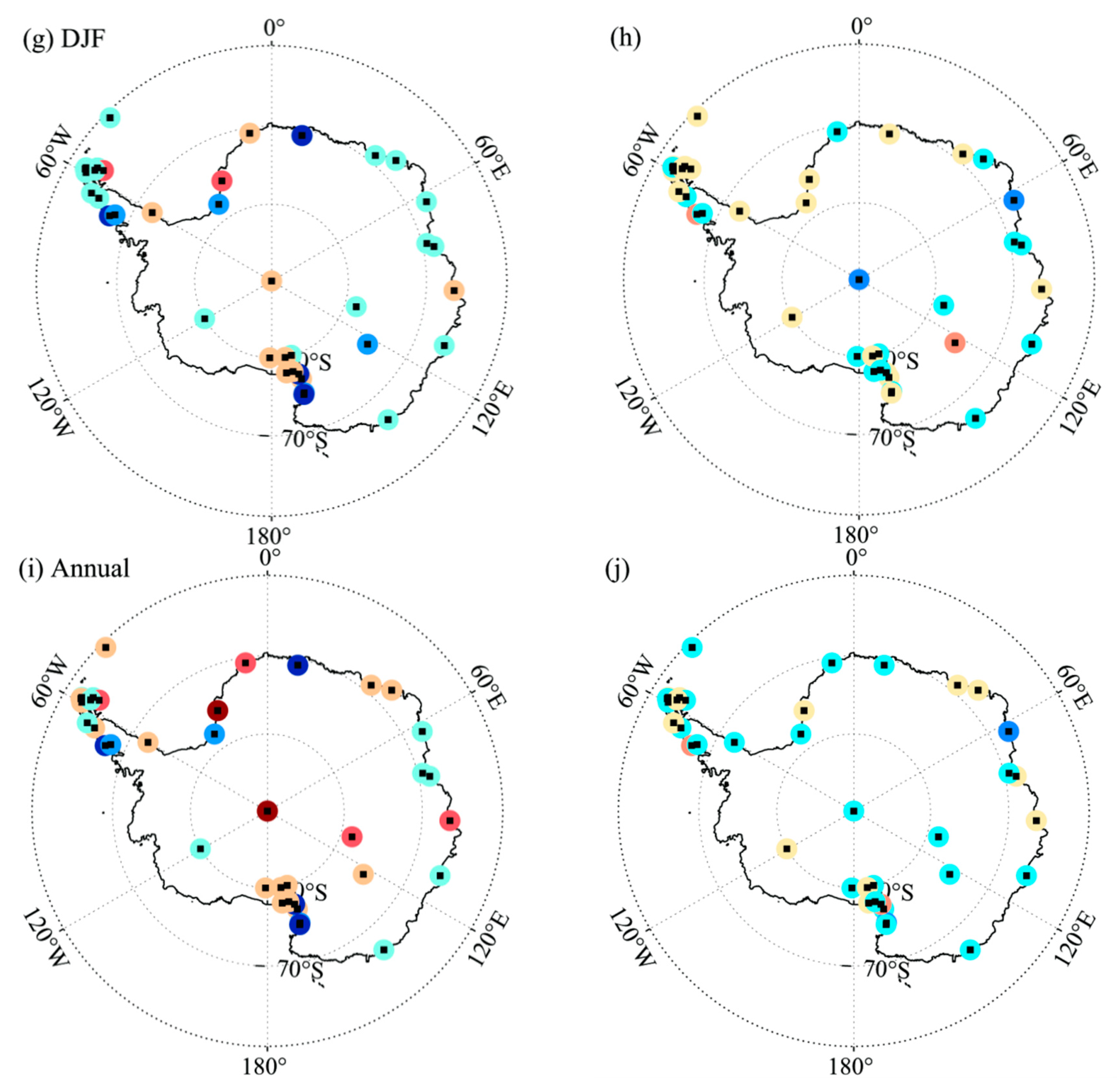 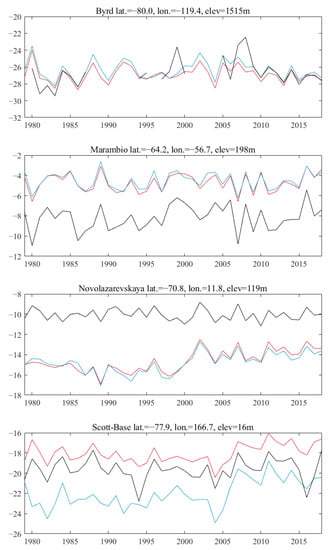 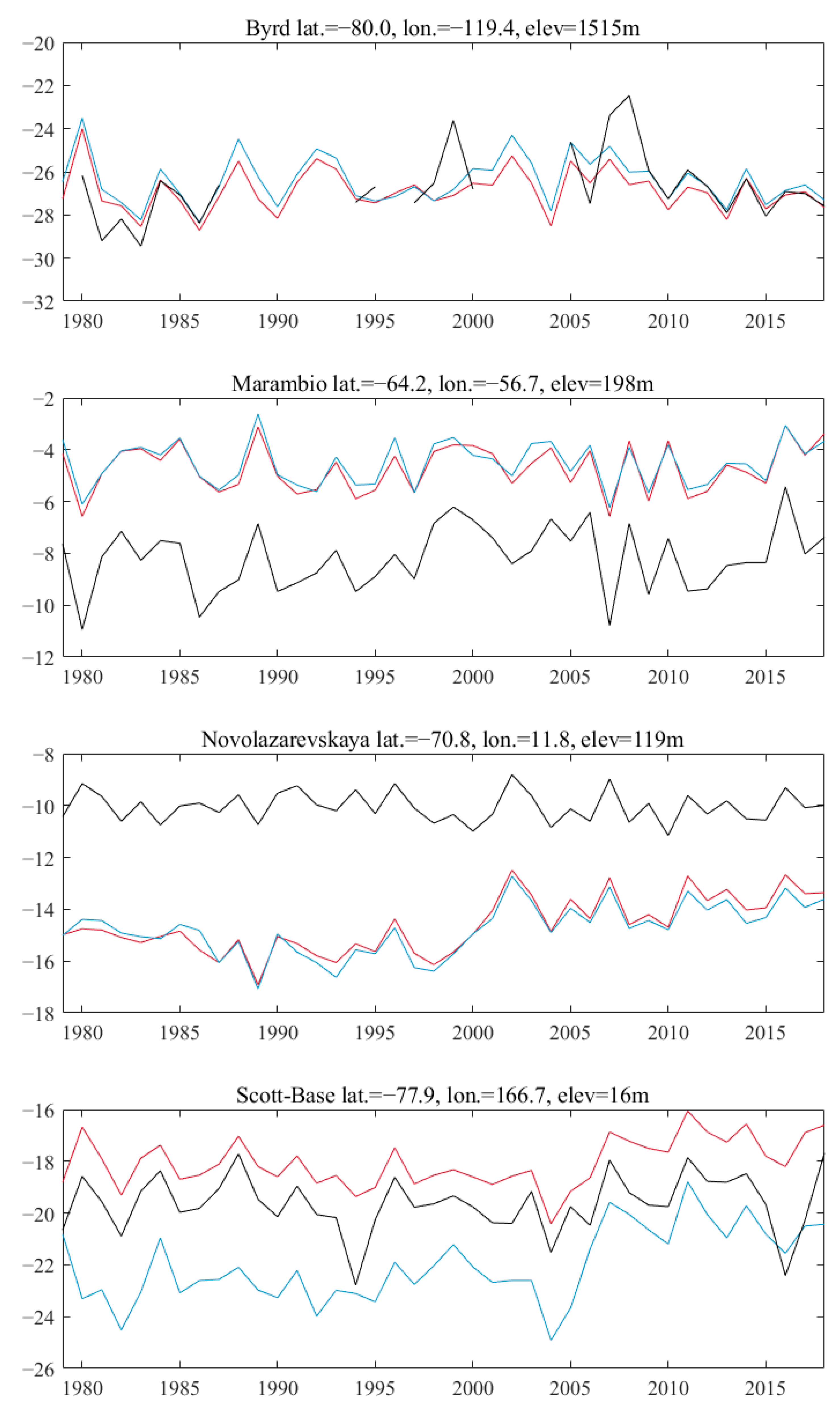 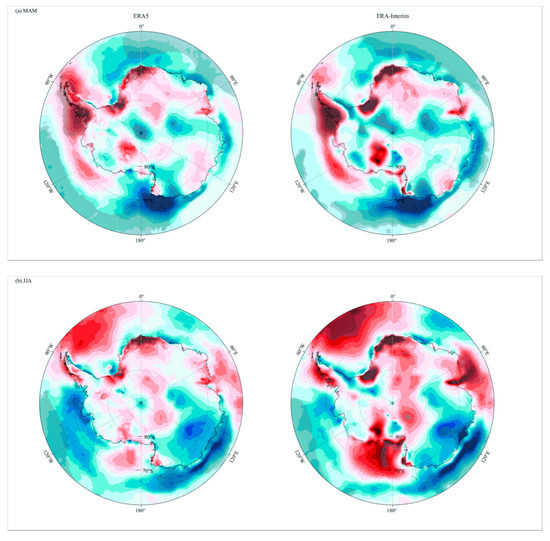 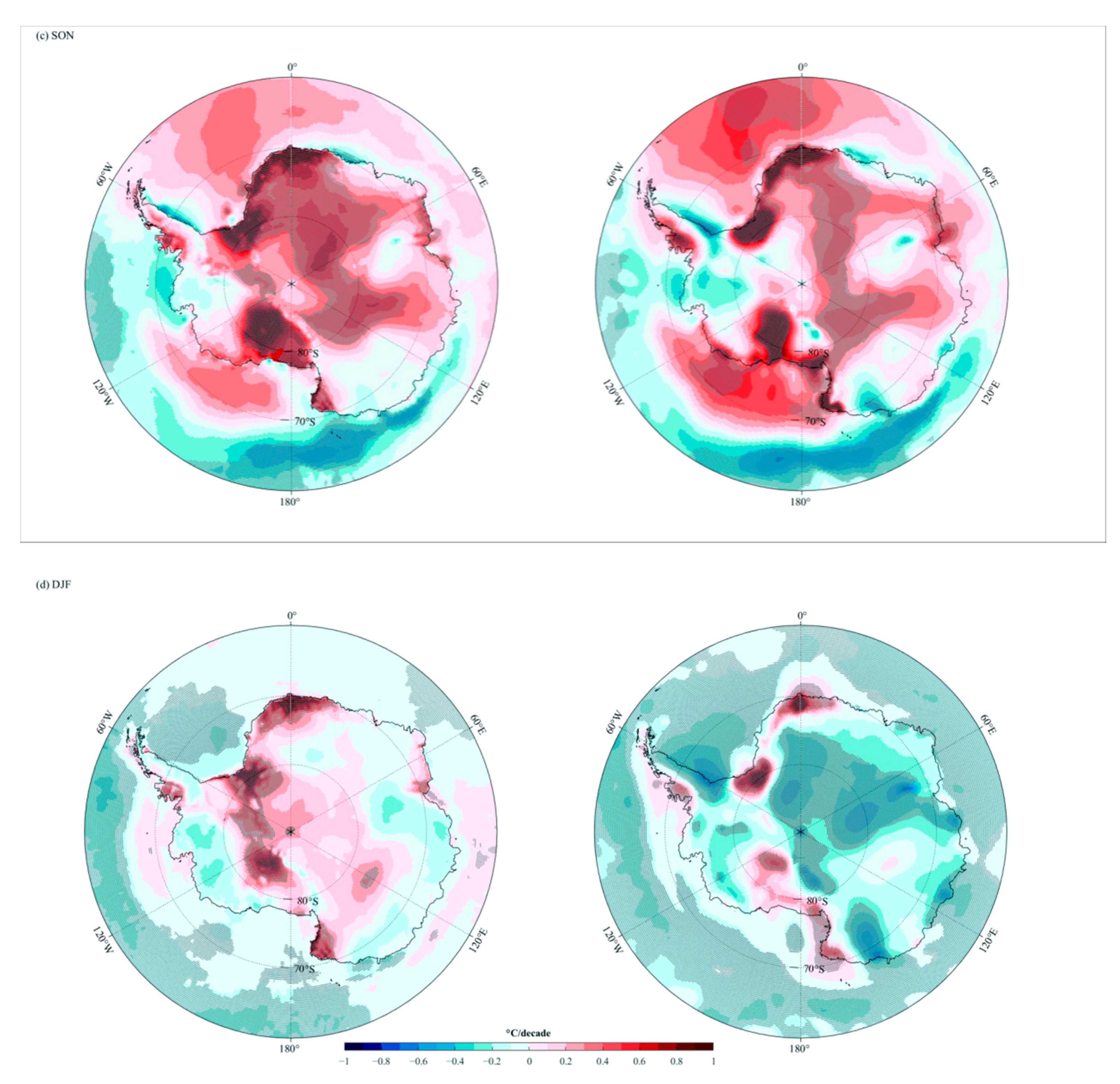 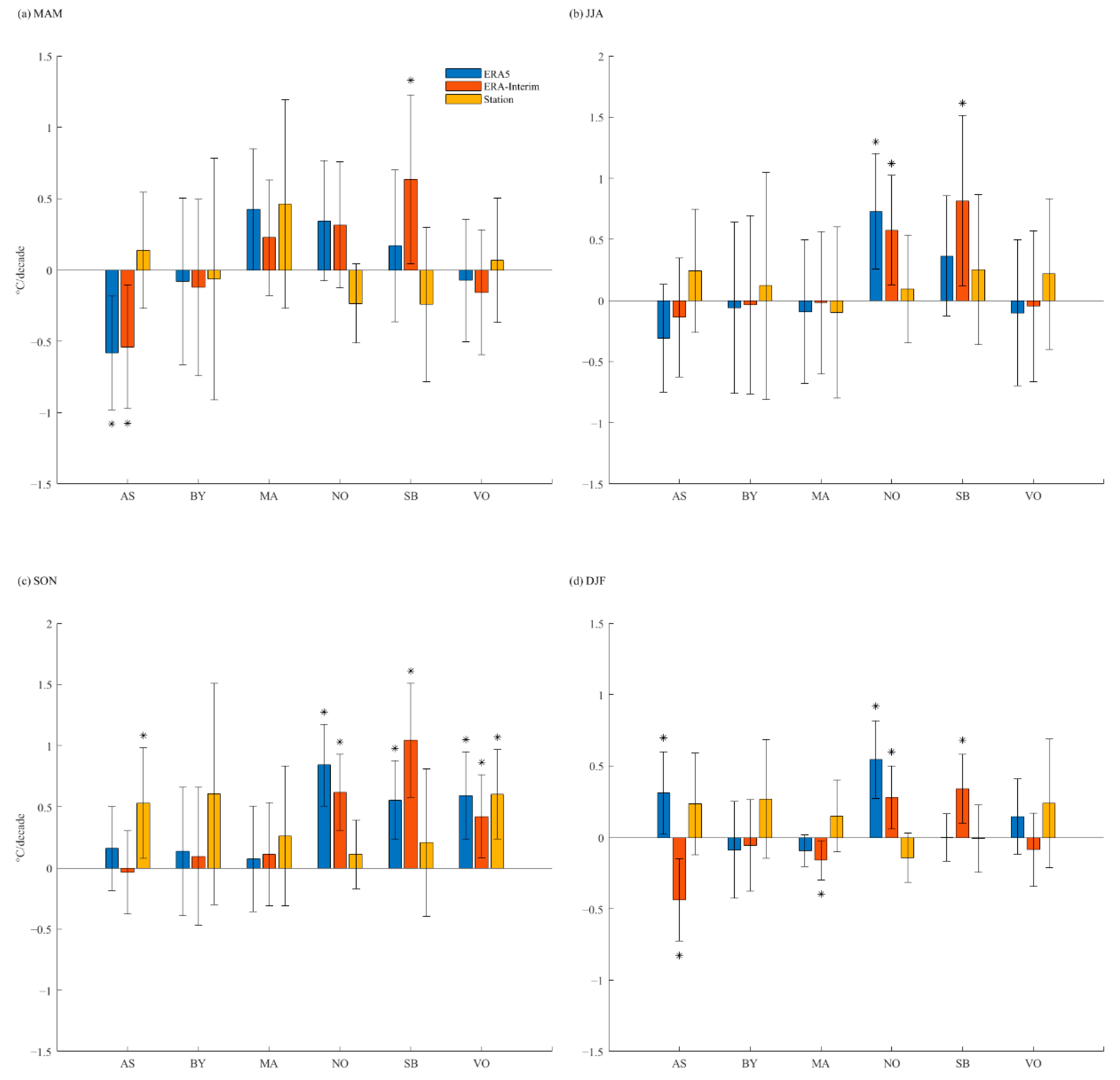 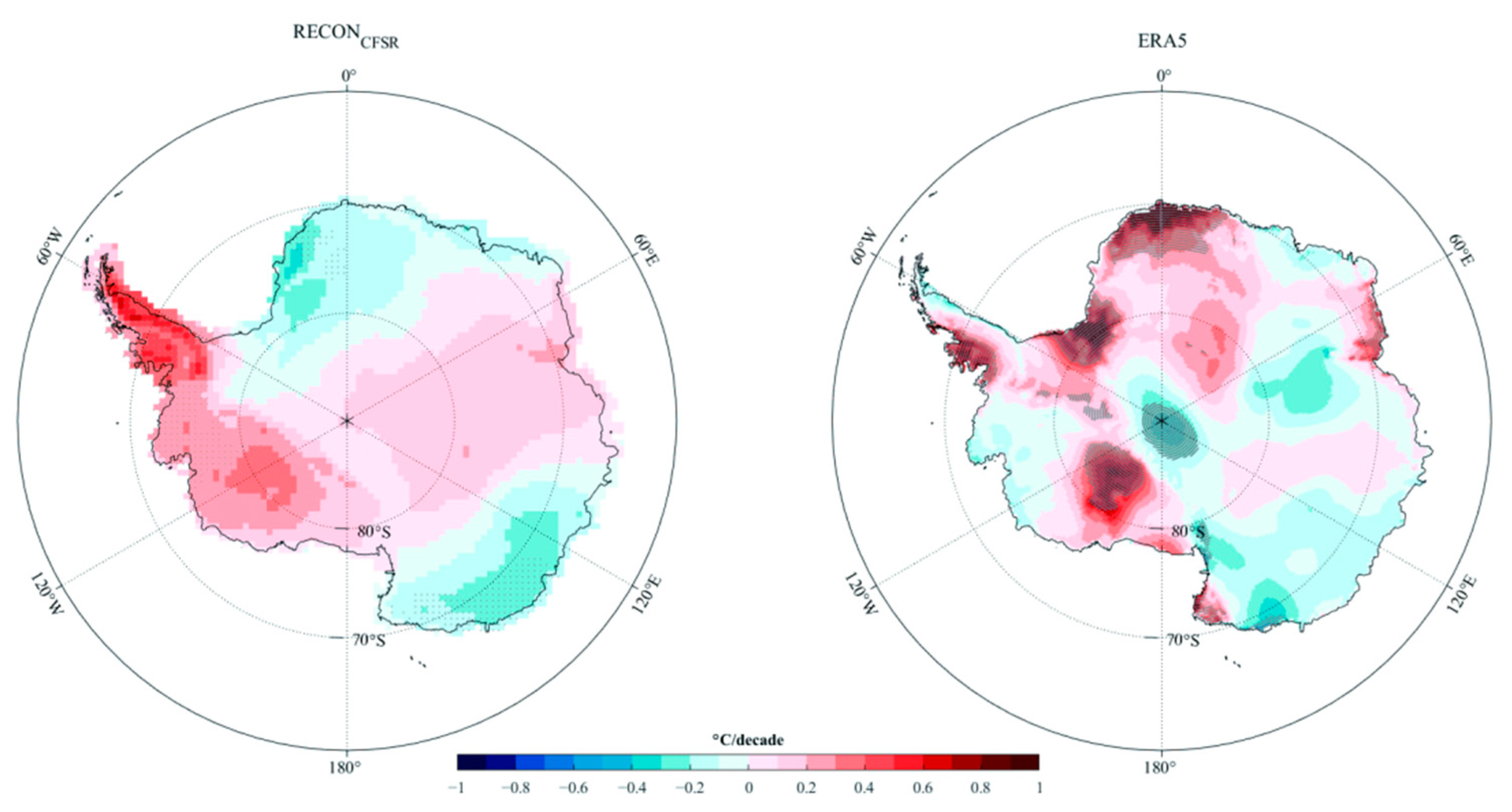