During 10–12 June 2012, heavy rainfall occurred three days in a row in southern and central Taiwan, with daily rainfall maxima exceeding 500 mm on each day. In the Mei-yu season (May–June) during 1993–2000, only two other rainfall events had a comparable amount and duration, but this case was the only one that occurred well before the arrival of the Mei-yu front. The synoptic conditions and their evolution leading to this unique event are thus important and are the foci of this study. Our analysis indicates that the 10–12 June 2012 event in Taiwan was caused by the strong and persistent west-southwesterly low-level jet (LLJ) that transported warm, moist, and unstable air from upstream and then impinged on the island. The LLJ developed due to the enhanced horizontal pressure (or height) gradient when the pressure at low-levels fell significantly (by ~8 hPa) in South China (north of the jet) during 8–10 June, but the subtropical high to the southeast maintained its strength. Further, through a diagnosis using the pressure tendency equation, it is found that both warm air advection and the dynamic effects (column divergence and transport of mass by vertical motion) contributed to the pressure fall in South China. The warm air advection occurred in the southern part of a large-scale confluent pattern in China, and the persistent west-southwesterly flow through deep layer (mainly above 800 hPa) in South China transported warmer and less dense air into the region from lower latitudes. On the other hand, South China was also located under the diffluent zone in the northeastern quadrant of the South Asian upper-level anticyclone, which strengthened during 5–10 June and provided divergence aloft, which exceeded the low-level convergence and upward transport of mass (at a fixed height) into the column by vertical motion on 9 June. As a result, the dynamic effects also contributed to the pressure fall, although secondary to the warm air advection. The destabilization process in South China during 8–10 June was also helpful to increase convective activity and upper-level divergence. View Full-Text
Keywords: heavy rainfall; Mei-yu; low-level jet; pressure tendency equation heavy rainfall; Mei-yu; low-level jet; pressure tendency equation
►▼ Show Figures 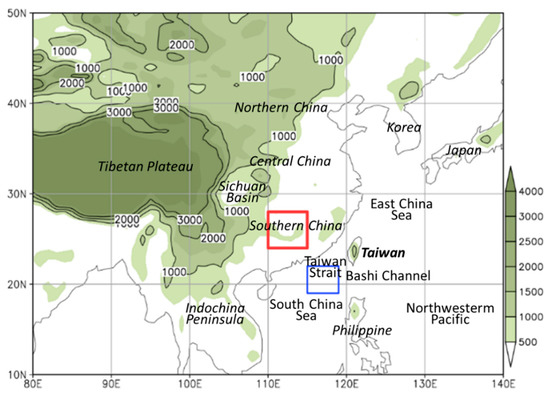