Connection between Antarctic Ozone and Climate: Interannual Precipitation Changes in the Southern Hemisphere

In this study, we explored the connection between anomalies in springtime Antarctic ozone and all-year precipitation in the Southern Hemisphere by using observations from 1960–2018 and coupled simulations for 1960–2050. The observations showed that this correlation was enhanced during the last several decades, when a simultaneously increased coupling between ozone and Southern Annular Mode (SAM) anomalies became broader, covering most of the following summer and part of the previous winter. For eastern Australia, the ozone–precipitation connection shows a greater persistence toward the following summer than for other regions. On the other hand, for South America, the ozone–precipitation correlation seems more robust, especially in the early summer. There, the correlation also covers part of the previous winter, suggesting that winter planetary waves could affect both parameters. Further, we estimated the sensitivity of precipitation to changes in Antarctic ozone. In both observations and simulations, we found comparable sensitivity values during the spring–summer period. Overall, our results indicate that ozone anomalies can be understood as a tracer of stratospheric circulation. However, simulations indicate that stratospheric ozone chemistry still contributes to strengthening the interannual relationship between ozone and surface climate. Because simulations reproduced most of the observed connections, we suggest that including ozone variability in seasonal forecasting systems can potentially improve predictions. View Full-Text
Keywords: ozone hole; precipitation; climate ozone hole; precipitation; climate
►▼ Show Figures 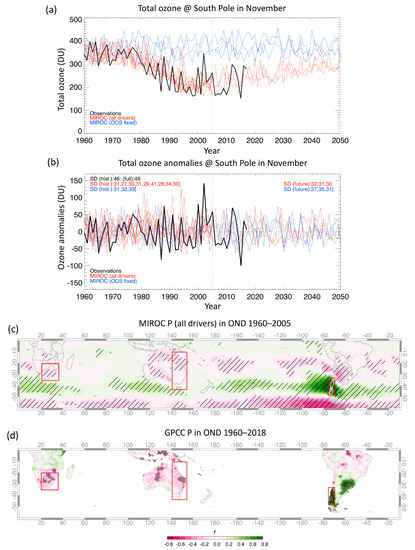