Turbulence in a Coronal Loop Excited by Photospheric Motions

Mobility Infrastructures in Cities and Climate Change: An Analysis Through the Superblocks in Barcelona

Cities are key actors in the fight against climate change since they are major sources of greenhouse gas (GHG) emissions while at the same time they experience the negative impact of this phenomenon. Mitigating and adapting to climate change requires fundamental changes in urbanism and city automobile traffic. Superblocks, a grid of blocks and basic roads forming a polygon, approximately 400 by 400 m, are one of the instruments for such changes. These type of city Superblocks represent a new model of mobility that restructures the typical urban road network, thereby substantially reducing automobile traffic, and accordingly GHG emissions, while increasing green space in the city and improving the health and quality of life of its inhabitants. Furthermore, the Superblocks do not require investment in hard infrastructures, nor do they involve demolishing buildings or undertaking massive development; they are in fact very low-tech urbanism. The city of Barcelona has been implementing Superblocks as one of the measures to combat climate change with very positive results. The paper analyzes the concept of the Superblock and its relation with climate change in cities. Along these lines, it analyzes the pioneer experience of Barcelona in the development and implementation of the Superblocks, as a radical plan aimed at taking back the streets from cars. The role of political power and institutional leadership has been key in societal acceptance and the achievement of tangible results. But there are also obstacles and drawbacks in the development of these types of Superblocks, such as the necessity to redesign the collective transport network so that car traffic can truly be reduced in cities, the possible negative influence on traffic going in and out of the city, the lack of visible advantages if they are not implemented in the entire city, the risk of gentrification in the areas with Superblocks, public opposition, and opposition from certain sectors of the business community. View Full-Text
Keywords: superblocks; climate change; cities; urban mobility; Barcelona superblocks; climate change; cities; urban mobility; Barcelona
►▼ Show Figures 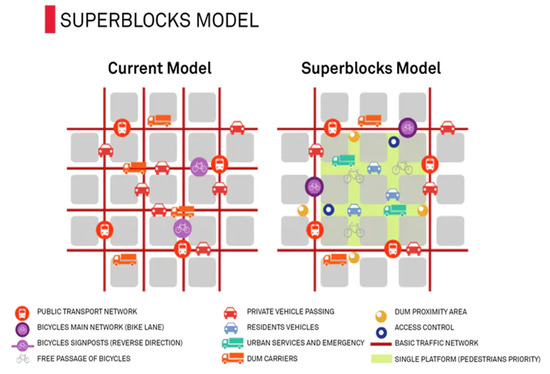