Monitoring of Air Pollution by Moss Bags around an Oil Refinery: A Critical Evaluation over 16 Years
Previous Article in Journal

Evaluation of the Efficiency of Arundo donax L. Leaves as Biomonitors for Atmospheric Element Concentrations in an Urban and Industrial Area of Central Italy

(1) Background: Hong Kong is one of the most densely populated cities in the world, with millions of people exposed to severe air pollution. Surface ozone, mostly produced photochemically from anthropogenic precursor gases, is harmful to both humans and vegetation. The phytotoxicity of ozone has been shown to damage plant photosynthesis, induce early leaf death, and retard growth. (2) Methods: We use genotypes of bush bean Phaseolus vulgaris with various degrees of sensitivity to ozone to investigate the impacts of ambient ozone on the morphology and development of the beans. We use ozone-induced foliar injury index and measure the flowering and fruit production to quantify the ozone stress on the plants. (3) Results: We expected that the ozone-sensitive genotype would suffer from a reduction of yield. Results, however, show that the ozone-sensitive genotype suffers higher ozone-induced foliar damage as expected but produces more pods and beans and heavier beans than the ozone-resistant genotype. (4) Conclusions: It is postulated that the high ozone sensitivity of the sensitive genotype causes stress-induced flowering, and therefore results in higher bean yield. A higher than ambient concentration of ozone is needed to negatively impact the yield production of the ozone-sensitive genotype. Meanwhile, ozone-induced foliar damage shows a graduated scale of damage pattern that can be useful for indicating ozone levels. This study demonstrates the usefulness of bioindicators to monitor the phytotoxic effects of ozone pollution in a subtropical city such as Hong Kong. View Full-Text
Keywords: bush bean; sensitive and resistant genotype; ambient ozone bush bean; sensitive and resistant genotype; ambient ozone
►▼ Show Figures 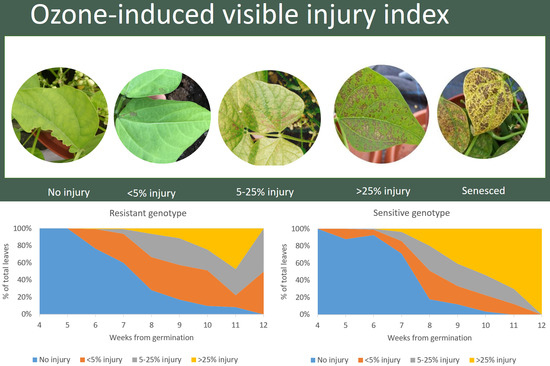