During the last decades, global and regional climate models have been widely used for the estimation of future climate conditions. Unfortunately, the models’ estimated values present important biases relative to the observed values, especially when the estimations refer to extremes. Consequently, several researchers have studied several statistical methods that are able to minimize the biases between climate models and observed values. The present study evaluates a new statistical method for bias correction: The triangular irregular network (TIN)-copula method. This method is a combination of the triangular irregular networks and the copula theory. In the present research, the new method is applied to ten Mediterranean stations and its results are compared with the bias-corrected values of three other widely used methods: The delta, the scaling, and the empirical quantile mapping methods. The analysis was made for maximum mean temperature (TMX) and minimum mean temperature (TMN) as well as for extreme precipitation (R99). According to the results, the TIN-copula method is able to correct extreme temperature and precipitation values, estimated by regional climate models, with high accuracy. Additionally, it is proven that the TIN-copula method is a useful tool for bias correction as it presents several advantages compared with the other methods, and it is recommended for future works. View Full-Text
Keywords: TIN-copula; triangular irregular networks; copula; bias correction; Mediterranean; extremes TIN-copula; triangular irregular networks; copula; bias correction; Mediterranean; extremes
►▼ Show Figures 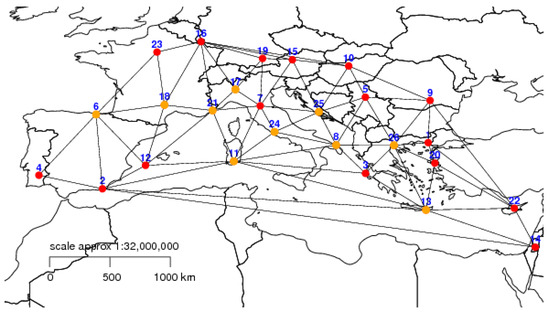