The increasing frequency, intensity and duration of heat waves seem to follow the observed global warming in recent decades. Vulnerability to heat waves is expected to increase in urban environments mainly due to population density and the effect of the urban heat island that make cities hotter than surrounding non-urban areas. The present study focuses on a vulnerable area of the eastern Mediterranean, already characterized as a ‘hot spot’ with respect to heat-related risk and investigates the change in heat stress levels during heat wave compared to non-heat wave conditions as well as the way that heat stress levels respond to heat waves in urban, compared to non-urban, environments. The adoption of a metric accounting for both the intensity and duration of the hot event yielded a total of 46 heat wave episodes over a nearly 60-year period, but with very rare occurrence until the late 1990s and a profound increased frequency thereafter. The results reveal a difference of at least one thermal stress category between heat wave and non-heat wave periods, which is apparent across the entire range of the thermal stress distribution. The analysis demonstrates a robust intensification of nighttime heat stress conditions in urban, compared to non-urban, sites during severe heat waves. Nevertheless, severe heat waves almost equalize heat stress conditions between urban and non-urban sites during midday. View Full-Text
Keywords: heat waves; heat stress; urban thermal environment; bioclimatic indices; UTCI; Humidex; urban thermal risk; Athens heat waves; heat stress; urban thermal environment; bioclimatic indices; UTCI; Humidex; urban thermal risk; Athens
►▼ Show Figures 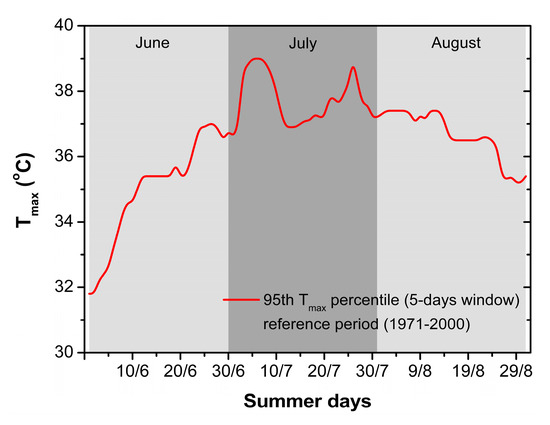