East Asian Summer Atmospheric Moisture Transport and Its Response to Interannual Variability of the West Pacific Subtropical High: An Evaluation of the Met Office Unified Model
Next Article in Special Issue

The same prescribed anthropogenic aerosol forcing was implemented into three climate models. The atmosphere components of these participating climate models were the GAMIL, ECHAM, and CAM models. Ensemble simulations were carried out to obtain a reliable estimate of anthropogenic aerosol effective radiative forcing (ERF). The ensemble mean ERFs from these three participating models with this aerosol forcing were −0.27, −0.63, and −0.54 W∙m−2. The model diversity in ERF is clearly reduced as compared with those based on the models’ own default approaches (−1.98, −0.21, and −2.22 W∙m−2). This is consistent with the design of this aerosol forcing. The modeled ERF can be decomposed into two basic components, i.e., the instantaneous radiative forcing (RF) from aerosol–radiation interactions (RFari) and the aerosol-induced changes in cloud forcing (△Fcloud*). For the three participating models, the model diversity in RFari (−0.21, −0.33, and −0.29 W∙m−2) could be constrained by reducing the differences in natural aerosol radiative forcings. However, it was difficult to figure out the reason for the model diversity in △Fcloud* (−0.05, −0.28, and −0.24 W∙m−2), which was the dominant source of the model diversity in ERF. The variability of modeled ERF was also studied. Ensemble simulations showed that the modeled RFs were very stable. The rapid adjustments (ERF − RF) had an important role to play in the quantification of the perturbation of ERF. Fortunately, the contribution from the rapid adjustments to the mean ERF was very small. This study also showed that we should pay attention to the difference between the aerosol climate effects we want and the aerosol climate effects we calculate. View Full-Text
Keywords: aerosol climate effects; reduced complexity; model diversity; calculation methods aerosol climate effects; reduced complexity; model diversity; calculation methods
►▼ Show Figures 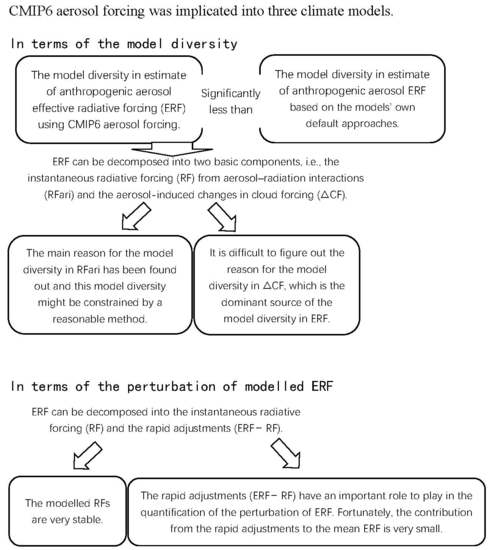