Spatiotemporal Variability of Actual Evapotranspiration and the Dominant Climatic Factors in the Pearl River Basin, China
Next Article in Special Issue

Analysis of a Haze Event over Nanjing, China Based on Multi-Source Data
Previous Article in Special Issue

Dropsondes are typically deployed from research or reconnaissance aircraft at a height of ~3 km (i.e., 700 hPa), with a descending rate of ~ 10 m s−1 and a vertical sampling resolution of ~7 m. During the process of descent, atmospheric profiles of pressure, temperature, relative humidity, and horizontal winds are collected by the dropsonde. The accuracy of pressure, temperature, relative humidity and horizontal wind speed are ±1.0 hPa, ±0.2 °C, ±5%, and ±0.5 ms−1, respectively [43]. The dropsonde data used in this study are from the Hurricane Research Division (HRD) archives and have been quality controlled using the Editsonde and/or ASPEN programs.
In this study, a total of 7326 GPS dropsonde profiles collected by research aircraft in 37 TCs from 1998 to 2015 are analyzed. The storm intensity is obtained from the hurricane best track database produced by the National Hurricane Center (NHC). The storm tracks processed by HRD, which combine the best track storm locations with aircraft center fixes, are used in the analysis. We linearly interpolate the storm intensity, center and motion from the track data to the dropsonde time. For the composite analysis of the inner-core structure, the dropsonde profiles must meet the following requirements: (i) They have measurements of wind speed, temperature, and humidity from flight-level all the way to the surface with no data gaps, (ii) the maximum sustained wind speed (i.e., storm intensity) from NHC’s best track is larger than 64 kt (Cat 1 strength), and (iii) the sondes are deployed within four times the radius of maximum wind speed (RMW). A total of 1916 dropsonde profiles are used in the final composite analysis after this screening. Note that the RMW data used in this study are calculated based on the flight-level data following [44]. Table 1 summarizes the storm information and numbers of dropsondes used in this work.
The dropsonde distribution relative to the storm center is shown in Figure 1, with observation locations rotated with respect to the storm motion direction to the top of the figure. Figure 1 shows nearly evenly distributed data at motion-relative azimuths at all radii, although more dropsonde data are located close to the RMW (i.e., r/RMW = 1). The dropsonde data are composited in four motion-relative quadrants defined clockwise from the storm motion direction, as right-front, right-rear, left-rear and left-front (Figure 2). The storm characteristics in terms of frequency distribution, including the storm intensity , RMW, storm translational direction, and storm speed are presented in Figure 3. Storm intensities range from 65–150 kt, sizes in terms of RMW range from 10–65 km, and translational speed ranges from 2–20 ms−1. The mean storm intensity for the whole sample is 105.5 kt, the mean RMW is 28.5 km, and the mean storm translational speed is 5.27 ms−1.
In this study, we use the same composite methodology as Zhang et al. [31] to construct the radial-vertical profiles of virtual temperature (), tangential wind, radial wind, and Richardson number in four quadrants relative to the storm motion. When compositing the data, the radial bin width is 0.2 (r* = r/RMW) for the inner core (), and it is 0.4 for the outer part. The data are also bin averaged vertically at 10 m resolution. The final averaged data are also smoothed with three passes of a 1-2-1 filter, instead of five passes as in Zhang et al. [31]. The data sampling sizes for different quadrants are displayed in Figure 2 as a function of normalized radius and height. The largest sample size is located in the vicinity of the eyewall as expected. Figure 2 also indicates that the data samples for the four motion-relative quadrants are similar.

The authors would like to thank all the scientists and crew members who have been involved in the hurricane field program and operational reconnaissance hurricane missions to help collect the dropsonde data used in this study. This paper is a follow-up work of the first author’s Master thesis and she would like to acknowledge Prof. Xiaolei Zou and Prof. Ming Cai for their helpful discussions. We also wish to thank the reviewers for their comments that led to improvement of the paper. 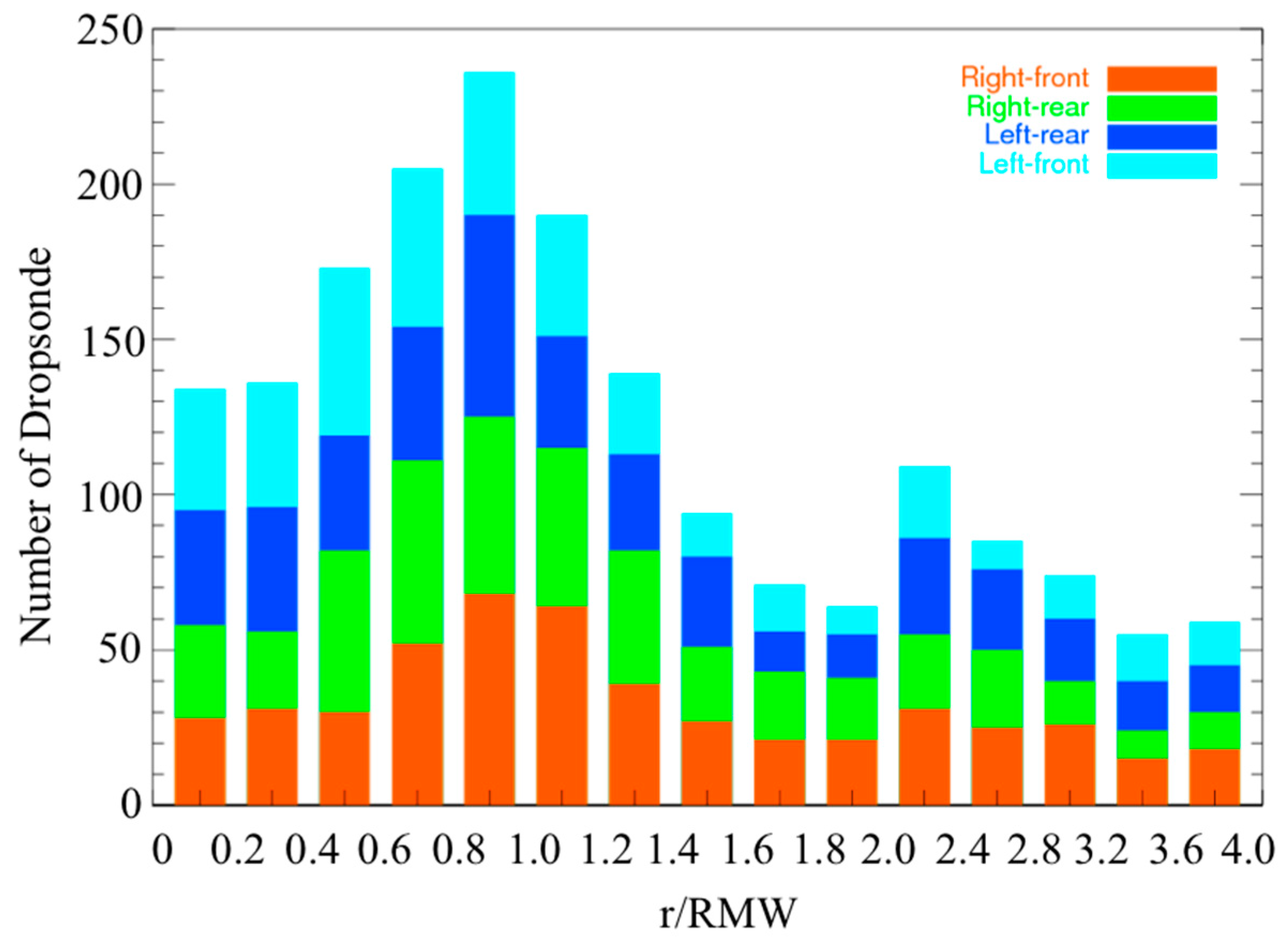 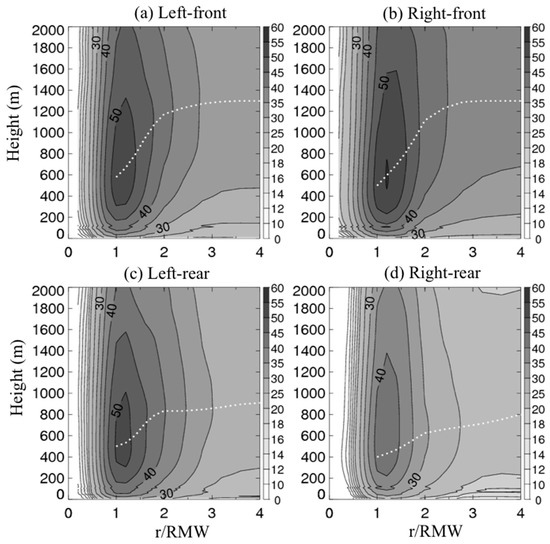 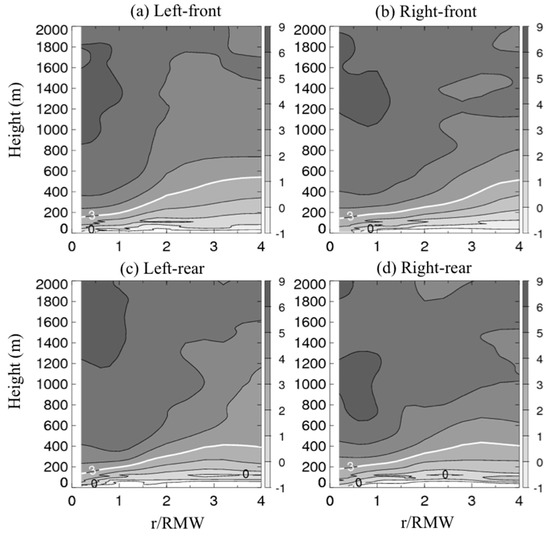 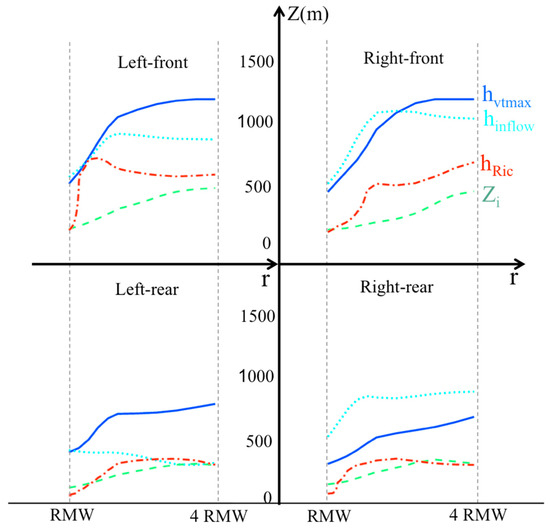 Table 1. Storm information and number of dropsondes (1916).
Table 1. Storm information and number of dropsondes (1916).
© 2019 by the authors. Licensee MDPI, Basel, Switzerland. This article is an open access article distributed under the terms and conditions of the Creative Commons Attribution (CC BY) license (http://creativecommons.org/licenses/by/4.0/).
We use cookies on our website to ensure you get the best experience. Read more about our cookies here.
Accept
We have just recently launched a new version of our website. Help us to further improve by taking part in this short 5 minute survey here. here.
Never show this again