Haze pollution has frequently occurred in winter over Eastern China in recent years. Over Eastern China, Moderate Resolution Imaging Spectroradiometer (MODIS) cloud detection data were compared with the Cloud–Aerosol Lidar with Orthogonal Polarization (CALIOP) for three years (2013–2016) for three kinds of underlying surface types (dark, bright, and water). We found that MODIS and CALIOP agree most of the time (82% on average), but discrepancies occurred at low CALIOP cloud optical thickness (COT < 0.4) and low MODIS cloud top height (CTH < 1.5 km). In spring and summer, the CALIOP cloud fraction was higher by more than 0.1 than MODIS due to MODIS’s incapability of observing clouds with a lower COT. The discrepancy increased significantly with a decrease in MODIS CTH and an increase in aerosol optical depth (AOD, about 2–4 times), and MODIS observed more clouds that were undetected by CALIOP over PM2.5 > 75 μg m−3 regions in autumn and particularly in winter, suggesting that polluted weather over Eastern China may contaminate MODIS cloud detections because MODIS will misclassify a heavy aerosol layer as cloudy under intense haze conditions. Besides aerosols, the high solar zenith angle (SZA) in winter also affects MODIS cloud detection, and the ratio of MODIS cloud pixel numbers to CALIOP cloud-free pixel numbers at a high SZA increased a great deal (about 4–21 times) relative to that at low SZA for the three surfaces. As a result of the effects of aerosol and SZA, MODIS cloud fraction was 0.08 higher than CALIOP, and MODIS CTH was more than 2 km lower than CALIOP CTH in winter. As for the cloud phases and types, the results showed that most of the discrepancies could be attributed to water clouds and low clouds (cumulus and stratocumulus), which is consistent with most of the discrepancies at low MODIS CTH. View Full-Text
Keywords: cloud detection; aerosol; solar zenith angle; MODIS; CALIPSO; Eastern China cloud detection; aerosol; solar zenith angle; MODIS; CALIPSO; Eastern China
►▼ Show Figures 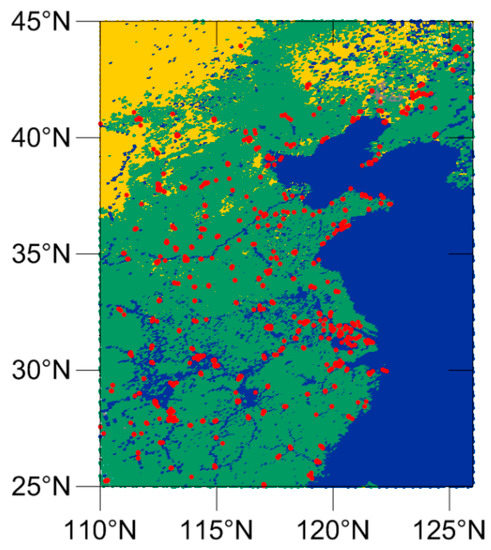