Supercell thunderstorms can produce a wide spectrum of vortical structures, ranging from midlevel mesocyclones to small-scale suction vortices within tornadoes. A less documented class of vortices are horizontally-oriented vortex tubes near and/or wrapping about tornadoes, that are observed either visually or in high-resolution Doppler radar data. In this study, an idealized numerical simulation of a tornadic supercell at 100 m grid spacing is used to analyze the three-dimensional (3D) structure and kinematics of horizontal vortices (HVs) that interact with a simulated tornado. Visualizations based on direct volume rendering aided by visual observations of HVs in a real tornado reveal the existence of a complex distribution of 3D vortex tubes surrounding the tornadic flow throughout the simulation. A distinct class of HVs originates in two key regions at the surface: around the base of the tornado and in the rear-flank downdraft (RFD) outflow and are believed to have been generated via surface friction in regions of strong horizontal near-surface wind. HVs around the tornado are produced in the tornado outer circulation and rise abruptly in its periphery, assuming a variety of complex shapes, while HVs to the south-southeast of the tornado, within the RFD outflow, ascend gradually in the updraft. View Full-Text
Keywords: horizontal vortices; tornadoes; supercell; numerical simulation; visualization horizontal vortices; tornadoes; supercell; numerical simulation; visualization
►▼ Show Figures 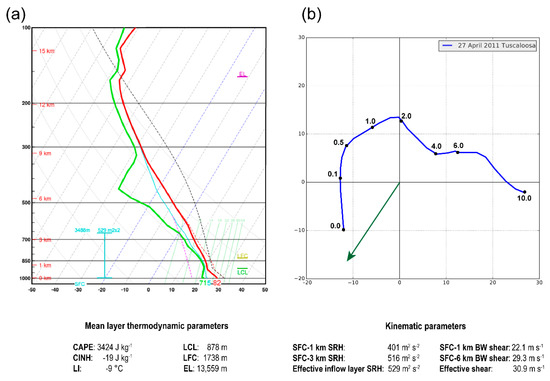