Comparative Transcriptomics of Root Development in Wild and Cultivated Carrots

The carrot is the most popular root vegetable worldwide. The genetic makeup underlying the development of the edible storage root are fragmentary. Here, we report the first comparative transcriptome analysis between wild and cultivated carrot roots at multiple developmental stages. Overall, 3285, 4637, and 570 genes were differentially expressed in the cultivated carrot in comparisons made for young plants versus developing roots, young plants versus mature roots, and developing roots versus mature roots, respectively. Of those, 1916, 2645, and 475, respectively, were retained after filtering out genes showing similar profiles of expression in the wild carrot. They were assumed to be of special interest with respect to the development of the storage root. Among them, transcription factors and genes encoding proteins involved in post-translational modifications (signal transduction and ubiquitination) were mostly upregulated, while those involved in redox signaling were mostly downregulated. Also, genes encoding proteins regulating cell cycle, involved in cell divisions, development of vascular tissue, water transport, and sugar metabolism were enriched in the upregulated clusters. Genes encoding components of photosystem I and II, together with genes involved in carotenoid biosynthesis, were upregulated in the cultivated roots, as opposed to the wild roots; however, they were largely downregulated in the mature storage root, as compared with the young and developing root. The experiment produced robust resources for future investigations on the regulation of storage root formation in carrot and Apiaceae. View Full-Text
Keywords: Daucus carota L.; DEGs; domestication; gene expression regulation; storage root; transcriptome Daucus carota L.; DEGs; domestication; gene expression regulation; storage root; transcriptome
►▼ Show Figures 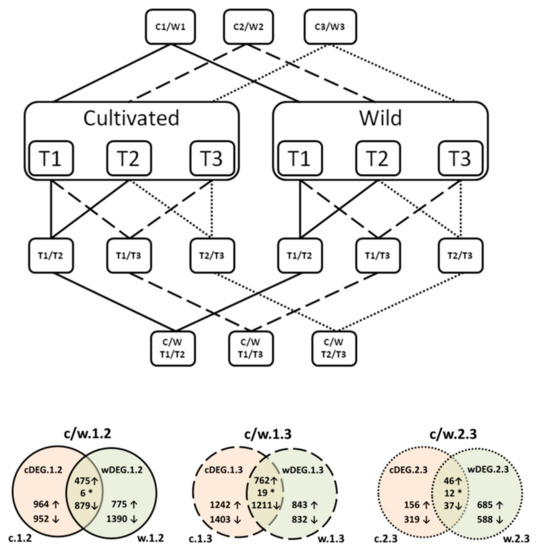